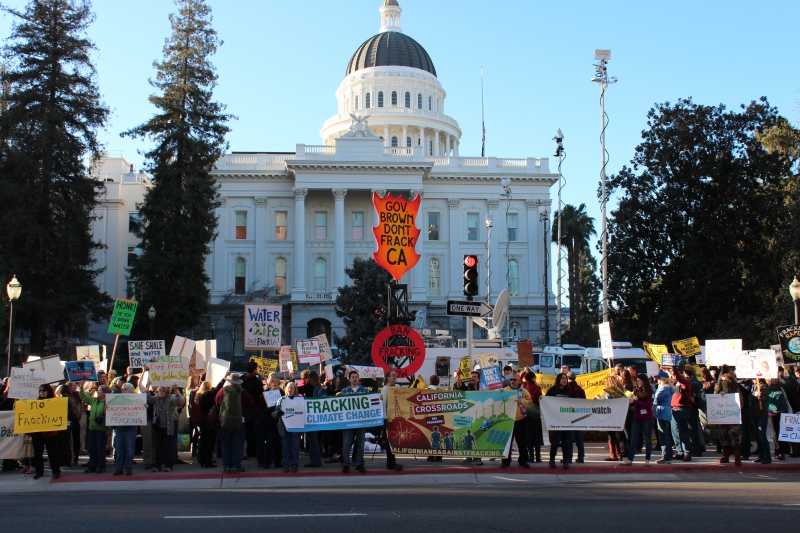 While over 100 protesters held signs and banners asking Governor Jerry Brown to ban fracking outside of the State Capitol in Sacramento on Wednesday, the Governor in his State of the State Address promoted the Bay Delta Conservation Plan to build the peripheral tunnels as one of the "solutions" to addressing California's unprecedented drought.

"Right now, it is imperative that we do everything possible to mitigate the effects of the drought," said Brown. "I have convened an Interagency Drought Task Force and declared a State of Emergency. We need everyone in every part of the state to conserve water. We need regulators to rebalance water rules and enable voluntary transfers of water and we must prepare for forest fires."

"As the State Water Action Plan lays out, water recycling, expanded storage and serious groundwater management must all be part of the mix. So too must be investments in safe drinking water, particularly in disadvantaged communities. We also need wetlands and watershed restoration and further progress on the Bay Delta Conservation Plan," said Brown.

While the protest took place on the sidewalk on the north steps of the Capitol, activists from Oil Change International and 350.org deployed a three-story banner across from the Capitol with the message: “Governor Brown: Climate Leaders Don’t Frack. Ban Fracking Now."

Adam Scow, California Campaigns Director of Food and Water Watch, pointed out the irony of Brown pushing the tunnels and fracking while California is suffering from a record drought.

“By allowing fracking to happen in California, Jerry Brown’s actions are in direct conflict with his rhetoric today on water conservation and climate change,” said Scow. “Brown’s current water and energy policies mismanage the people of California’s water supply, and this – not his ‘green’ talk – will be what defines his legacy.”

"It's time for the Governor to stop the peripheral tunnels and ban fracking," said Scow. "The Governor's action this year on fracking and the tunnels will define his legacy as a bold leader or a myopic politician."

"It's hypocritical for Governor Brown to ask Californians to cut their personal water usage while pushing a plan that would allow the fracking industry to massively increase the amount of water it consumes and contaminates," said Zack Malitz, CREDO's Campaign Manager. "If Governor Brown moves forward with his fracking plan, he'll be forcing farmers and ranchers to compete with the fracking industry for water while exacerbating climate change and making California even more vulnerable to extreme drought in the future."

The protest was organized by 350.org, California State Grange, Center for Biological Diversity, Center on Race, Poverty, and the Environment, CREDO, Food & Water Watch, Friends of the Earth, Oil Change International, and other members of the statewide coalition Californians Against Fracking.

Barbara Barrigan-Parrilla, Executive Director of Restore the Delta, after hearing Brown's State of the State, emphasized that the Governor's plan to build two forty-foot tunnels under the Delta, at a total cost of over $60 billion with interest and operation expenses, "will not add one drop of additional water to the system."

"There is a better way to manage our water," she said. "First, we need to export a safe yield of water from the Delta without repeatedly depleting the watershed. Second, we need to reinforce levees to ensure that the water that can be shared from the Delta is secure for all Californians. Third, we need to retire drainage-impaired agricultural lands on the west side of the San Joaquin Valley.

"This will ultimately be cheaper than building the peripheral tunnels, and it will end the cycle of poor water management decisions made by state officials to enrich a few hundred corporate agribusinesses," Barrigan-Parrilla noted.

"Last, we need to put unemployed Californians back to work by investing in smaller local water projects throughout the state that will actually create new water. Independent reports on water conservation projects show that recycling, groundwater clean-up, and conservation programs will put twice as many people to work for each $1 million spent than a big project like the peripheral tunnels," she concluded.

There is no doubt that poor water management of rivers and reservoirs by the Brown and Obama administrations has exacerbated the impact of the drought - and the peripheral tunnels, if built, would only make things even worse. Last summer, high water releases down the Sacramento, Feather and American rivers left Shasta, Oroville and Folsom reservoirs at dangerously low levels.

While Brown was giving his address, Congressman Devin Nunes, Congressman Kevin McCarthy, and Congressman David Valadao, with the support of House Speaker John Boehner, convened in Bakersfield to announce their plan to suspend the Endangered Species Act, allow the fish-killing Sacramento-San Joaquin Delta pumps to operate “as long as water is available” and to halt the San Joaquin River restoration plan.

"This is nothing more than a blatant, short-sighted water grab, fueled by years of political contributions from huge growers in the Westlands Water District and the Kern County Water Agency to these Central Valley Congressional Representatives," said Barbara Barrigan-Parrilla.

"Furthermore, we find it ironic that these Congressional representatives, who claim to be in favor of reduced Federal government intervention into state affairs, are looking for a way to bypass State and Federal water quality and quantity regulations, which will be violated if pumping restrictions are removed in the Delta. They are playing the anti-regulation card to dictate economic winners and losers among California’s farm and fishing communities."

"By declaring a drought emergency, Governor Brown has set up opponents of the Endangered Species Act to be able to strip away water quality protections for Bay-Delta fisheries, Delta family farms, and Delta urban communities," said Barrigan-Parrilla. "The Bureau of Reclamation and the Department of Water Resources allowed the overpumping of the Delta by 800,000 acre feet last year in order to appease the leaders of the Westlands Water District and the Kern County Water Agency. The mega-growers in those two water districts have used more exported water combined than the Metropolitan Water District and the Santa Clara Valley Water District over the last ten years."

"While water conservation is of the upmost importance for California, which experiences drought a third of the time, Metropolitan Water District officials have made recent statements that they have enough water in storage for the next three years," she added. "Taking more water away from the Delta and California’s rivers during a drought, one made worse by State and Federal water resource mismanagement, proves that even more of the same would happen if Governor Brown’s plan to build the peripheral tunnels comes to pass."

"What does it say that Governor Brown and Speaker Boehner are on the same side of championing the decimation of the Bay-Delta estuary, all to appease a few hundred growers who contribute less than .3% to the State’s economy? It indicates to the people on the ground in the Delta that our political leaders are poised to squander the most important and largest estuary on the west coast of the Americas for an unsustainable future that will further enrich a few big political contributors to Central Valley Congressional races, and recent California ballot initiatives," said Barrigan-Parrilla.