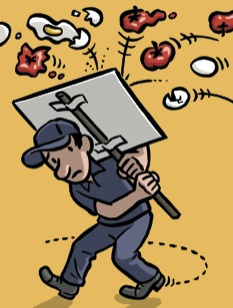 
IFPTE Local 21 Chief Union Steward, Stan Fleury, has been unjustly punished by City of Richmond Administrators for his union representation of bona fide city whistleblower Stacie Plummer! Even after the Assistant City Manager/Human Resources Director’s ouster, the Campaign of Retaliation continues against public employees in Richmond. City Administrators are using tax dollars to pay $400/hour to outside attorneys to cover up their retaliatory and unlawful acts. Public corruption continues at Richmond City Hall under City Manager Bill Lindsay!

The press, unions, public workers, bullied workers and the Richmond Community are invited to a rally and speak out on Thursday, January 30, 2014 from 4pm – 5pm at 440 Civic Center Plaza, Richmond, California. Stop retaliation against workers who place the public’s interest and public’s trust as their TOP priority!

Stan Fleury’s public personnel board hearing will promptly begin at 5pm in the basement lunch room of Richmond City Halls January 30, 2014. Come witness how government corruption is financed in Richmond!

Call 510-620-6512 or send an email to City Manager Bill Lindsay (bill_lindsay [at] ci.richmond.ca.us) stating that public corruption is no longer tolerated in Richmond! Save Richmond Tax Dollars for the Public Good!

See flyer Retaliation Speak Out 1.30.2014 for more information.
http://www.stopworkplacebullyinggroup.org
Add Your Comments
Support Independent Media
We are 100% volunteer and depend on your participation to sustain our efforts!