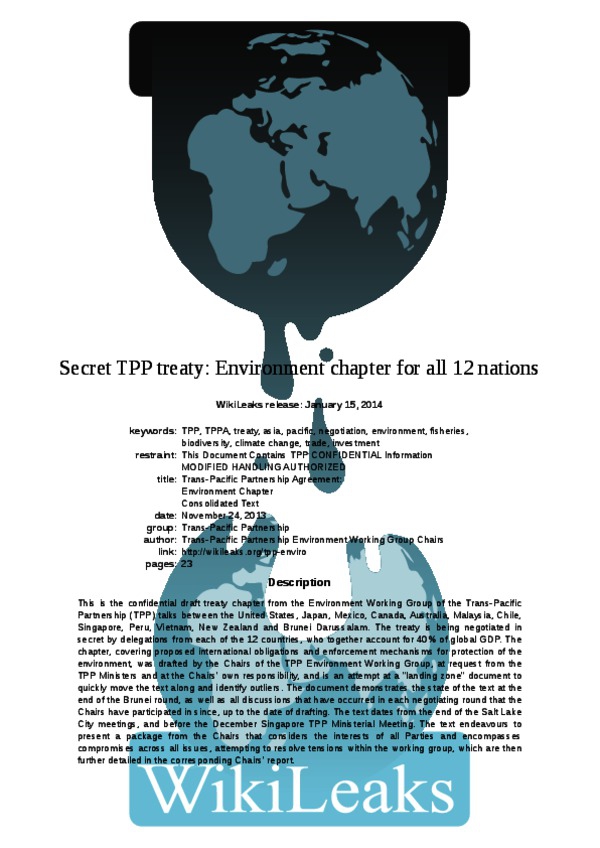 Download PDF (328.1KB)
The Environment Chapter covers what the Parties propose to be their positions on: environmental issues, including climate change, biodiversity and fishing stocks; and trade and investment in 'environmental' goods and services. It also outlines how to resolve enviromental disputes arising out of the treaty's subsequent implementation. The draft Consolidated Text was prepared by the Chairs of the Environment Working Group, at the request of TPP Ministers at the Brunei round of the negotiations.

When compared against other TPP chapters, the Environment Chapter is noteworthy for its absence of mandated clauses or meaningful enforcement measures. The dispute settlement mechanisms it creates are cooperative instead of binding; there are no required penalties and no proposed criminal sanctions. With the exception of fisheries, trade in 'environmental' goods and the disputed inclusion of other multilateral agreements, the Chapter appears to function as a public relations exercise.

Julian Assange, WikiLeaks' publisher, stated: "Today's WikiLeaks release shows that the public sweetner in the TPP is just media sugar water. The fabled TPP environmental chapter turns out to be a toothless public relations exercise with no enforcement mechanism."

The Chairs' Report of the Environment Working Group also shows that there are still significant areas of contention in the Working Group. The report claims that the draft Consolidated Text displays much compromise between the Parties already, but more is needed to reach a final text. The main areas of contention listed include the role of this agreement with respect to multilateral environmental agreements and the dispute resolution process.

The documents date from 24 November 2013 ─ the end of the Salt Lake City round. They were requested by the Ministers of the TPP after the August 2013 Brunei round. The Consolidated Text was designed to be a "landing zone" document to further the negotiations quickly and displays what the Chairs say is a good representation of all Parties' positions at the time. The WikiLeaks Consolidated Text and corresponding Chairs' Report show that there remains a lot of controversy and disagreement within the Working Group. The Consolidated Text published by WikiLeaks is not bracketed, as per the IP Chapter released in November 2013, as it is drafted by the Chairs of the Working Group at their responsibility. Instead, the accompanying Chairs' Report provides commentary on the draft Consolidated Text and is the equivalent of bracketed disagreements for the countries that have not agreed on certain Articles, and provides their positions.

TPP Environment Chapter Working Group Chairs' Report
https://wikileaks.org/tpp-enviro-chairsreport
Add Your Comments
Support Independent Media
We are 100% volunteer and depend on your participation to sustain our efforts!