Add an Event
Newswire
Calendar
Features
Home
Donate
From the Open-Publishing Calendar
From the Open-Publishing Newswire
Indybay Feature
Publish to Newswire
Add an Event
Related Categories:
The Myth of Turkish Secularism
by David Boyajian
Tuesday Jan 7th, 2014 10:50 AM
If Turkey is ever to be secular, it must allow the free exercise of all religions – including Islam – and guarantee the rights of the faithful to be free from harassment and compulsion. 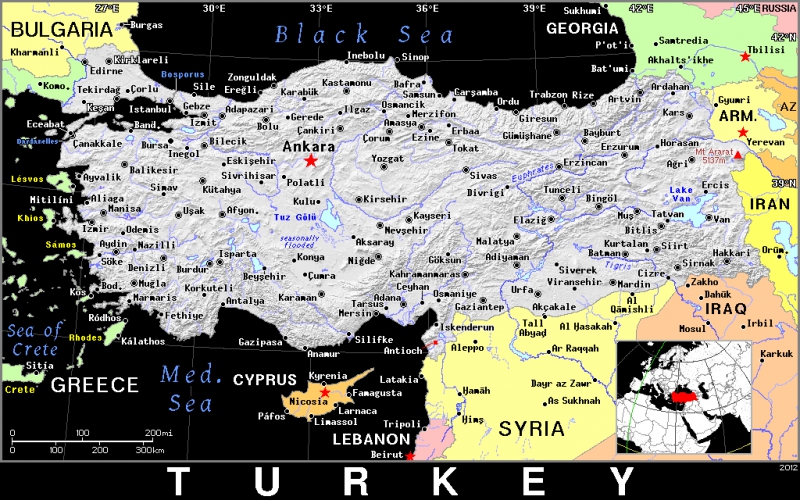 original image (1024x640)
Turkey is a secular state. So claim its government and nearly all mainstream Western media. They are mistaken.

In civilized, democratic countries, secularism means not only a respectful separation between church and state but also freedom of religion. As we shall demonstrate, Turkish policies have long been the antithesis of secularism.

The Turkish government massively supports and funds Islam – specifically Sunni Islam – inside the country. Turkey simultaneously represses religions such as Alevism, and bullies and persecutes indigenous Christians, most of whom it liquidated in 20th century genocides. Moreover, it uses Islam to project Turkish political power into Europe, Asia, and elsewhere. Turkey’s system is more properly termed State Islam.

This article is not a criticism of Islam or its faithful. We respect both. Turkey’s secularism myth, nevertheless, cries out to be laid bare.

The Directorate of Religious Affairs – known as the Diyanet – is the government body that represents and directs all of Sunni Islam in Turkey. Created in 1924, a year after the Republic of Turkey was formed, the Diyanet is enshrined in Article 136 of the Turkish Constitution. The Diyanet is huge and powerful. Operating under the Prime Minister, it employs about 100,000. All Sunni clergy are salaried civil servants of the Diyanet.

The Diyanet’s $2 billion annual outlay exceeds the combined budgets of Turkey’s Foreign, Energy, and Environmental Ministries. By law a political party can be dissolved if it dares to advocate the Diyanet’s abolition.

Until recently, the Diyanet wrote all the sermons for its clergy, but reportedly now sometimes allows them to write their own, though their contents are controlled.

Would the U.S. – or any democratic Western country – be termed “secular” if it funded a huge Christian government agency that employed all Christian clergy and controlled their sermons? Obviously not.

Who owns Turkey’s 80,000 mosques? It’s not always clear. Even many Turks wonder. For sure, however, the Diyanet controls all mosques. (Shiite Muslims represent only about 3% of Turkey’s 80 million people and are largely independent of the Diyanet.)

Two large mosques to be built on Istanbul’s Camlica Hill and Taksim Square are personal projects of Prime Minister Erdogan. The government is apparently paying most of the costs, not something a secular state would do.

The Diyanet operates not only in Turkey but worldwide. Turkish foreign policy and the Diyanet are intertwined. The latter promotes the country’s political influence abroad.

The Diyanet has a Foreign Affairs department that sends religious consultants not only into Muslim countries, such as those in Central Asia and Africa, but also into the United States, France, Germany, Great Britain, Sweden, and other European countries.

Indeed, some Turkish embassies and consulates have a religious affairs department and attachés that work with local Diyanet representatives. Turkey is very active, for instance, in the Netherlands where it reportedly pays the salaries of the Diyanet-affiliated Dutch Islamic Foundation’s staff.

A $100 million, 15-acre Turkish American Culture and Civilization Center (TACCC), which includes a large mosque, is being built in Lanham, Maryland, 14 miles from Washington, D.C. It is “a project of the government of Turkey” and the Turkish American Community Center. The latter’s older mosque is “related to the Republic of Turkey and the Department of Religious Affairs [Diyanet].” Several months ago, PM Erdogan placed a ceremonial stone at the TACCC construction site.

No truly secular state would do these things. Nor would it persecute persons of other religions.

Last year the U.S. Commission on International Religious Freedom (USCIRF), established by Congress, placed Turkey in its worst category, a “Country of Particular Concern,” alongside Burma, China, Pakistan, and a dozen others.

Restrictions that “deny non-Muslim communities the rights to train clergy, offer religious education, and own and maintain places of worship, have led to their decline, and in some cases their virtual disappearance.”

Such mistreatment of Christians, numbering only about 100,000, is particularly reprehensible given that Turkey carried out genocide from 1915 to 1923 against millions of indigenous Christian Armenians, Greeks, and Syriacs, including many Catholics and Protestants.

The persecution of non-Muslims continued even after the Turkish Republic came about in 1923. The infamous Capital Tax (Varlik Vergisi) program during WW II, as but one example, deliberately taxed Christians and Jews at extortionate rates that often exceeded their income. Men were sent to labor camps in the interior when unable to pay. Families were bankrupted. Only an international outcry stopped the program.

Thousands of Christian churches, schools, hospitals, orphanages, cemeteries, and other community properties have been continually seized by Turkey in the past several decades.

Though Turkey has recently returned some of these properties under international pressure, the vast majority has not been, and probably will not be, returned.

Countless ancient Armenian churches and monasteries, such as Saint Mark’s (Nshan) in Sivas, have been deliberately destroyed, sometimes with explosives. Others serve as stables. Earlier this year in the cities of Iznik and Trabzon, old Greek churches were converted to mosques.

Alevism is a religion that has some 10 to 20 million adherents in Turkey. Complex and somewhat mysterious, it contains elements of Shia Islam, Sufism, paganism, and other spiritual and religious traditions. Alevis worship in houses called cemevis, not mosques. Alevis and cemevis are not recognized by the Turkish government. Alevis complain bitterly, to little avail.

Alevis have long been the victims of discrimination and even violent attacks, such as in Sivas in 1993 when 35 leading Alevis were murdered by mobs, and most recently this year in Ankara, when police fired tear-gas at protesting Alevis.

“Turkey may look like a secular state on paper,” says Izzettin Dogan, a leading Alevi, “but in terms of international law it is actually a Sunni Islamic state.” He is correct, but most of the outside world is oblivious to voices such as his.

Some Turks feel that their country is secular because the Diyanet’s hegemony moderates Islam against extremist tendencies. There may be some truth to that.

But as secularism must include a respectful distance between religion and state, Turkey would still not qualify. Along with Turkey’s domestic religious repression, and employing the Diyanet in foreign policy, the claim of secularism is simply fallacious.

The Turkish government is in full-blown denial about secularism and religious freedom, as evidenced by PM Erdogan’s preposterous claim two years ago: “Turkey is a secular state where all religions are equal.”

If Turkey is ever to be secular, it must allow the free exercise of all religions – including Islam – and guarantee the rights of the faithful to be free from harassment and compulsion. The Turkish government’s acknowledgement of its past and present wrongs, especially to the non-Turkish and non-Muslim communities, and making genuine amends, must be part of this process.

Until then – particularly in the West – mainstream media, governments, religious leaders, academicians, and political analysts should cease swallowing Turkey’s fraudulent claim of secularism.


David Boyajian is a freelance journalist whose article article archive can be accessed at: http://armeniapedia.org/index.php?title=David_B._Boyajian