Add an Event
Newswire
Calendar
Features
Home
Donate
From the Open-Publishing Calendar
From the Open-Publishing Newswire
Indybay Feature
Publish to Newswire
Add an Event
Related Categories: Santa Cruz Indymedia | Police State & Prisons
Activist/Attorney Bangs on the Barrister Barricade
by Ed Frey (with remarks by R. Norse)
Monday Jan 6th, 2014 3:43 AM
PeaceCamp2010 co-founder and stalwart Ed Frey (pronounced "Fry") is the only local attorney to have been arrested, then trial and then served a six-month house arrest sentence for solidarity with homeless people here defending the right to sleep. He continues his persistent and relentless appeal the absurd and bizarre conviction of "Ground Zero" Gary Johnson. Judge "Grim Gavel" John Gallagher sentenced Gary to two years in jail for sleeping outside the County Building on a bench with a sign denouncing the (Homeless) Sleeping Ban. This happened in the closing days of the Occupy Santa Cruz movement in the winter of 2011-2012--though as an independent action. In his appeal of a blocked appeal, Ed raises technical but substantive legal issues which impact all appeals. 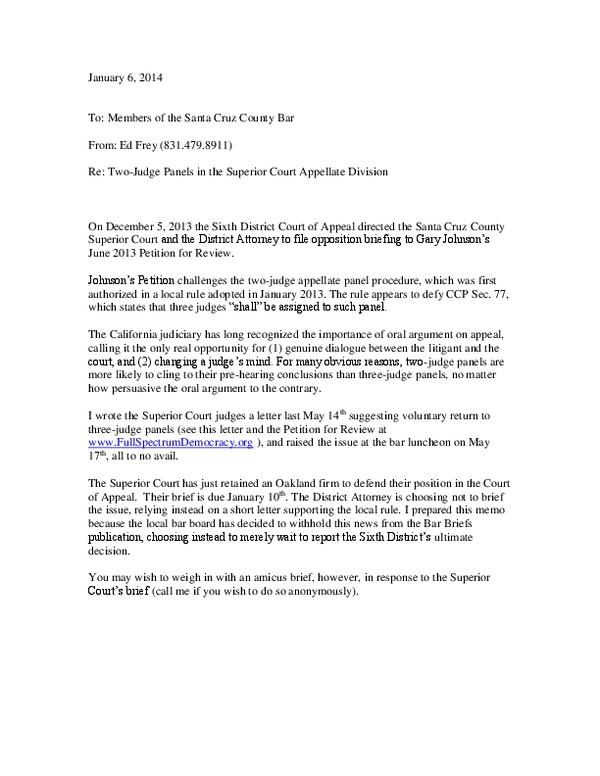 The background to the 2-judge panel issue: Gary Johnson was convicted of four counts of unlawful lodging when he slept outside the courthouse four nights with a sign up against his body saying 'sleep is not a crime'.
We challenged the statute on 6 or 8 constitutional issues (freedom of speech, due process of law -- vagueness of the statute, ninth amendment of the US constitution and its California analogue, cruel and unusual punishment, universal declaration of human rights, etc.)
Judge Gallagher rejected all of these contentions without comment then instructed the jury that unlawful lodging means "sleeping", so the jury had to convict Gary. Judge Gallagher then sentenced Gary to two years in jail but released him after 93 days in custody, but Gary was still subject to the full two years if he dared to break any laws, including sleeping in public.

When we appealed to the appellate division of the Superior Court only two judges, Symons and Burdick participated in the appeal, so after they rejected the appeal we requested a rehearing, which Symons and Burdick rejected. On June 13, 2013 we petitioned the Sixth District Court of Appeal in San Jose, based on 2-judge rather than 3-judge panel. Finally, on Dec 5th, the court of Appeal responded, directing the Superior Court and the DA to file briefs in response to the Petition.

We have an expert in the appellate process addressing the local bar at the Paradox Hotel Monday at noon. I contacted her Thursday, and she is interested in the issue of two-judge appellate panels. I will be distributing a memo to the local lawyers (see attached copy).

Street Spirit published a shortened version of indybay activist Alex Darocy's article on Linda Lemaster (the last of the PC2010 victims) at http://www.thestreetspirit.org/activist-linda-lemaster-convicted-of-illegal-lodging/ . The longer original article with more photos at a https://www.indybay.org/newsitems/2013/01/15/18730225.php . Linda's blog is at http://hearthbylinda.blogspot.com/ .

We have an expert in the appellate process addressing the local bar at the Paradox Hotel Monday at noon. I contacted her Thursday, and she is interested in the issue of two-judge appellate panels. I will be distributing a memo to the local lawyers.
Add Your Comments
LATEST COMMENTS ABOUT THIS ARTICLE
Listed below are the latest comments about this post.
These comments are submitted anonymously by website visitors.