Add an Event
Newswire
Calendar
Features
Home
Donate
From the Open-Publishing Calendar
From the Open-Publishing Newswire
Indybay Feature
Publish to Newswire
Add an Event
Related Categories: San Francisco | Health, Housing & Public Services | Police State & Prisons
"Cops and Condos go Hand in Hand!" Video, Poster, and Photos from Jan 1st March
by FireWorks
Friday Jan 3rd, 2014 11:55 AM
On January 1st, people marched and rallied in San Francisco against the 'Take Back the Plaza' campaign organized by wealthy business owners. Below are pictures from the march, a video, and a new PDF poster for printing and sharing with co-workers, neighbors, friends, and those in your community. 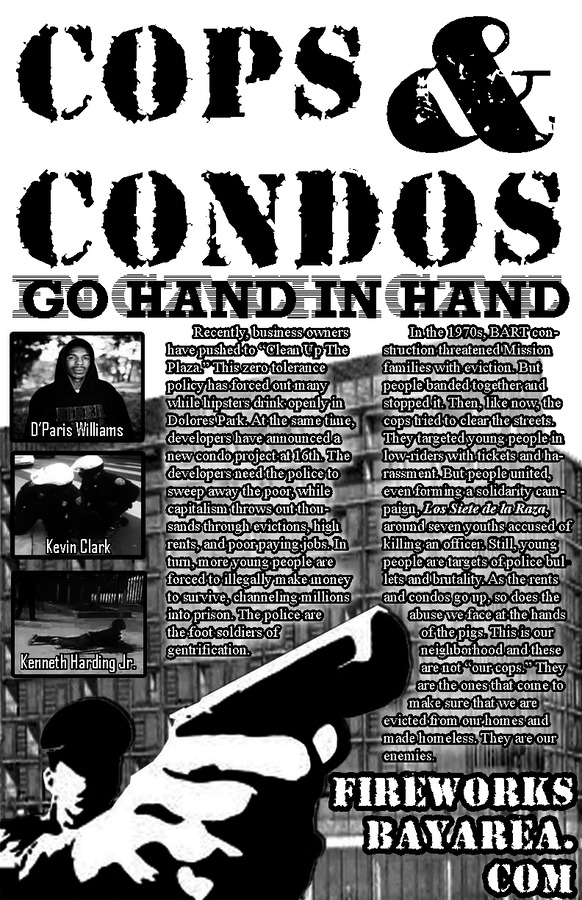 Recently, business owners have pushed to “Clean Up The Plaza.” This zero tolerance policy has forced out many while hipsters drink openly in Dolores Park. At the same time, developers have announced a new condo project at 16th. The developers need the police to sweep away the poor, while capitalism throws out thousands through evictions, high rents, and poor paying jobs. In turn, more young people are forced to illegally make money to survive, channeling millions into prison. The police are the foot soldiers of gentrification.

In the 1970s, BART construction threatened Mission families with eviction. But people banded together and stopped it. Then, like now, the cops tried to clear the streets. They targeted young people in low-riders with tickets and harassment. But people united, even forming a solidarity campaign, Los Siete de la Raza, around seven youths accused of killing an officer. Still, young people are targets of police bullets and brutality. As the rents and condos go up, so does the abuse we face at the hands of the pigs. This is our neighborhood and these are not “our cops.” They are the ones that come to make sure that we are evicted from our homes and made homeless. They are our enemies.

http://www.fireworksbayarea.com
§Banner from demonstration
by FireWorks Friday Jan 3rd, 2014 11:55 AM 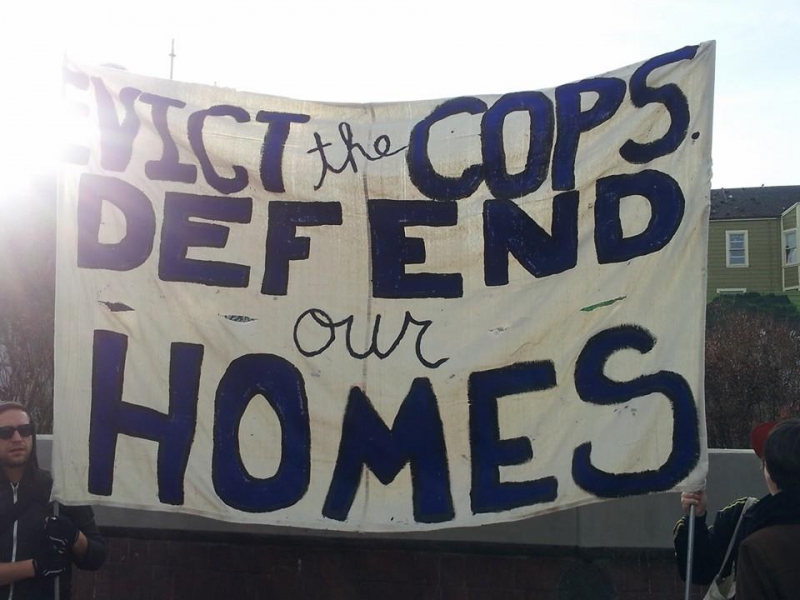 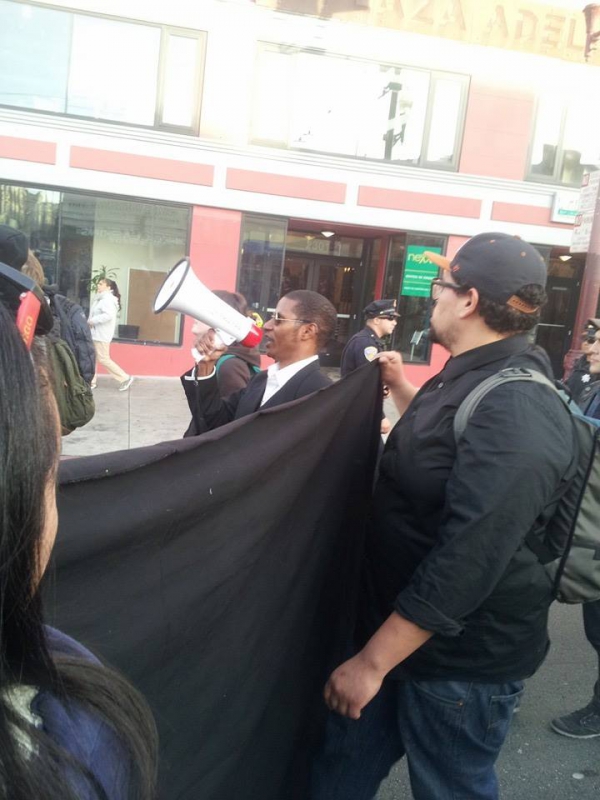 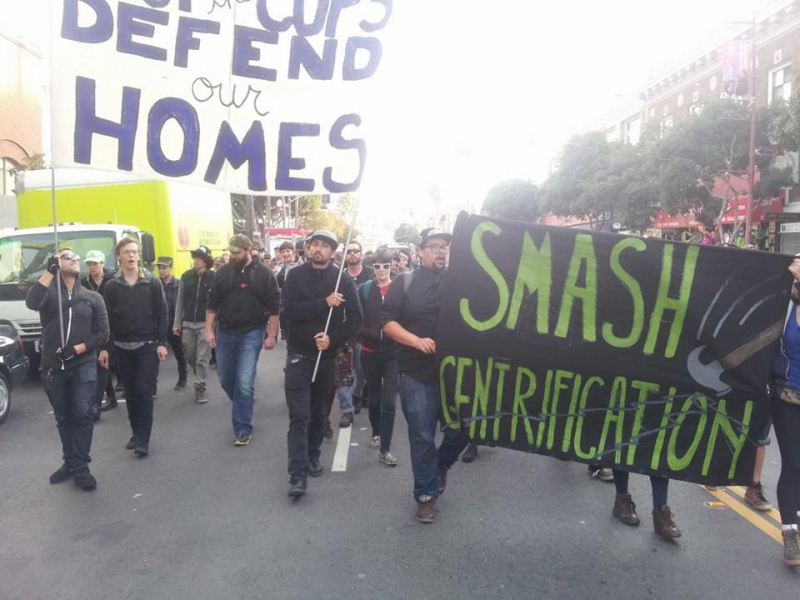 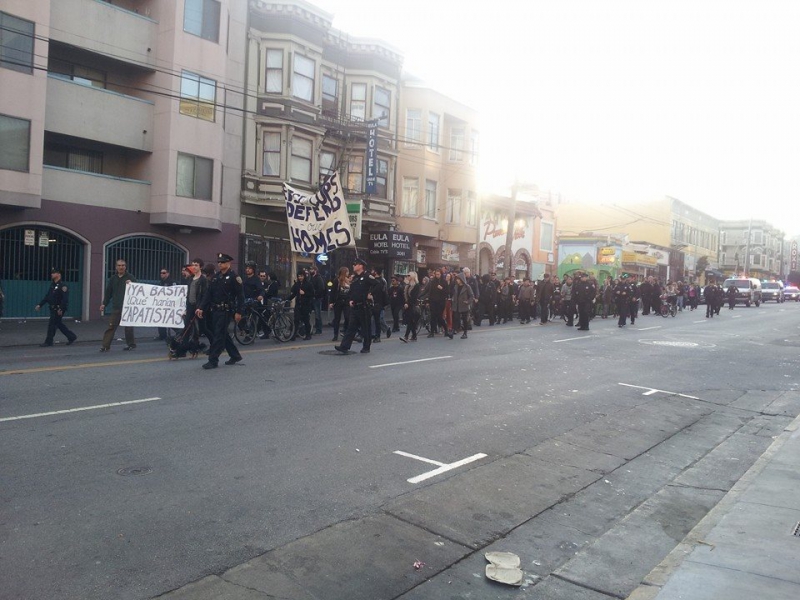 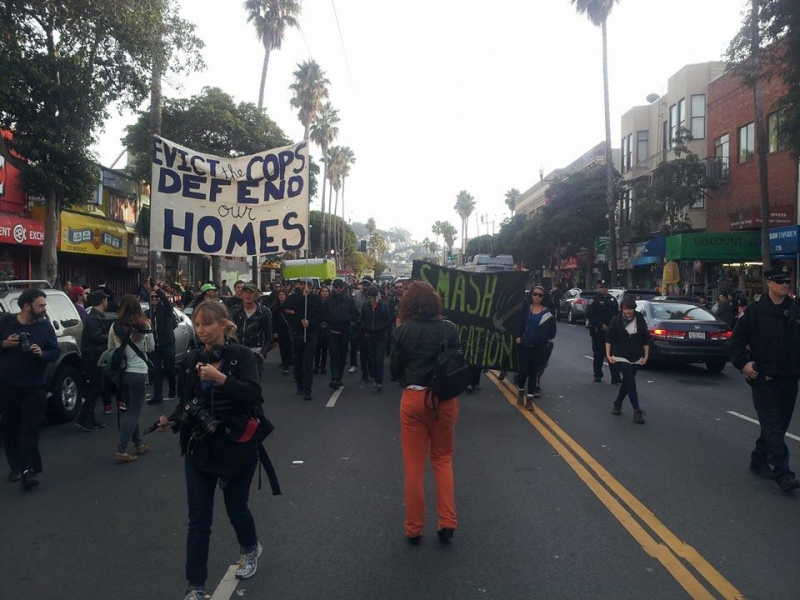 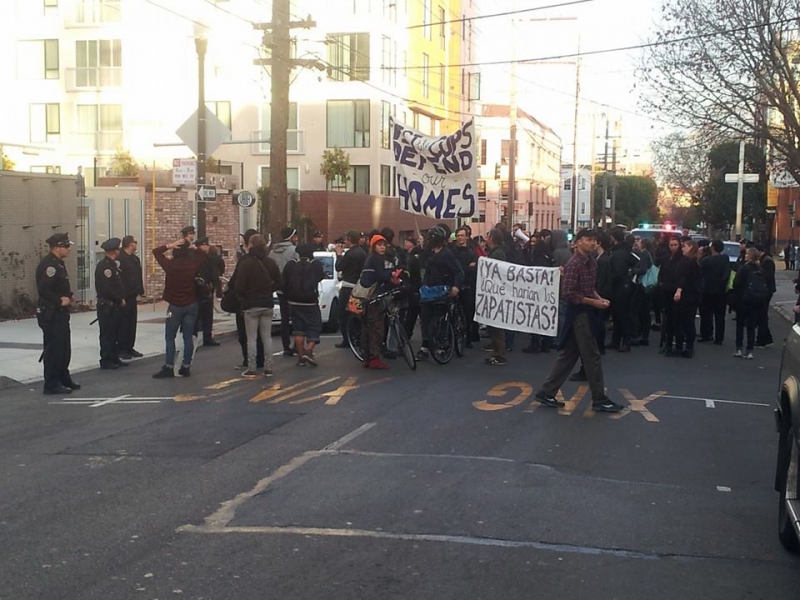 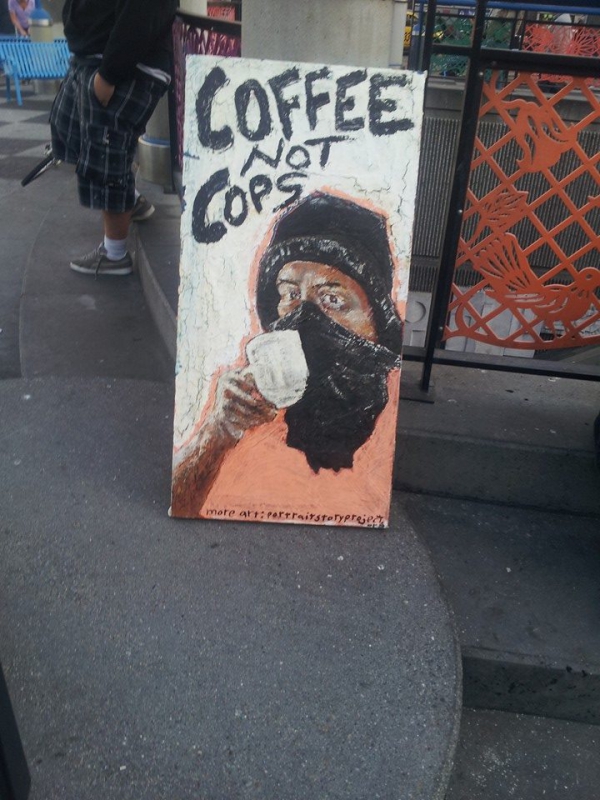 A 400,000 square foot development would replace retail at BART station.

(Please note that Gabriel Metcaff, referred to below, is a despicable pro-gentrification piece of garbage)

The potential redevelopment of a 57,000-square-foot lot atop the BART station at 16th and Mission has the potential to be a ferocious land use battle, pitting anti-gentrification forces against urbanists who argue that, if anything, the proposed 10-story building is too modest.

Maximus Real Estate Partners has filed an application to build 351 housing units and 32,000 square feet of retail on the northeast corner of 16th and Mission streets. The development would transform a bustling transportation hub that has been plagued by drug dealing and violent crime, including a murder last week.

The proposed project is consistent with the eastern neighborhoods rezoning that was passed a few years ago. The plan calls for a 105-foot mid-rise fronting Mission and 16th streets and 55-foot structures along the more residential Capp Street. The proposal calls for generous 14-foot glass store fronts that would wrap around the BART plaza and continue along Mission and 16th. In contrast, the group says the blank facades currently ringing the BART Plaza on Mission and Capp streets represent “a significant contributing factor to the high crime rate at the intersection.”

“The retail spaces will feature welcoming high ceilings and a large expanse of display glass to spark pedestrian interest and provide a safe and engaging revitalization of the BART plaza,” the proposal states.

The strong push to make the BART plaza safer for residents and workers will be balanced against the fear that the Mission is gentrifying so fast that it’s losing the creative, Latino-dominated culture that makes it so appealing in the first place.

“There is understandably a lot of freaking out right now about evictions and gentrification,” said Tim Colen, executive director of the Housing Action Coalition. “There is going to be a strong narrative that will probably say this project is going to displace poor Latino families who are just barely hanging on in the city.”

“I am really glad somebody is finally coming forward with a development proposal,” said Metcalf. “In a location like that, it’s important to make sure it is really well designed and to make sure we max out the density.”

Metcalf argued that the Eastern Neighborhood plan could have been more aggressive at both the 16th Street and 24th Street BART stations.

“The eastern neighborhood plan got the BART zoning wrong and missed the opportunity to add density on top of the most important regional transportation systems on the west coast,” he said.

But not everyone is thrilled with the scheme. Gabriel Medina, policy director for the Mission Economic Development Agency, said that the group would oppose any market rate housing at the site —even if the project were to be 50 percent affordable. He said the proposal would help driving up rental prices in the traditionally low-income area. Any development at 16th and Mission should be modeled after the Fruitvale transit village in Oakland, he said.

He said the eastern neighborhood plan, passed during the great recession, does not reflect the economic pressures existing today.

“The eastern neighborhood plan didn’t take into account the market disparity that we have — 30,000 new tech employees who covet the Mission more than any other neighborhood in San Francisco.”

Medina, a Mission District native whose grandfather sold newspapers at 16th and Mission, predicted that the fight over the project would be the most contentious the neighborhood has seen. “Every last person and every last coalition city wide is going to join us on this fight,” he said.

But Randy Shaw, executive director of the Tenderloin Housing Clinic, predicted that the project would have a lot of local support. He said crime is so bad at 16th and Mission that “surrounding businesses may cheer the project.” But Shaw said that some residents and neighbors could object to the sheer bulk of a project in a neighborhood that is characterized by smaller storefronts and doesn’t have a lot of monolithic, full-block projects.

Nate Allbee, a legislative aide to Supervisor David Campos, said that the supervisor has met with the developer and is starting to set up meetings with local community groups.

“We generally don’t take a position on developments because more likely than not they come before the Board of Supervisors and we don’t want to have a conflict,” he said. “With all development we think it’s most important for the developer to meet with the community from the get go.”

Philip Lesser, a longtime Mission District property owner and business advocate, said the Eastern Neighborhood plan, which restricted housing in many areas and encouraged the preservation of blue collar jobs, seems to be working.

That is why we went through the process, and now these guys are responding to the zoning, which is an indication of what San Francisco wants,” he said. “We are definitely going to see the regular cast of characters coming in and saying how can we get something out of this.”

Taken together with the Oyster Development project and Vara, the project represents the potential of Mission Street, Lesser said.

“There is only one neighborhood in the Bay Area that has two BART stations and that’s the Mission,” he said. “That is absolute gold. It doesn’t get any better than that. What you are seeing on Valencia Street and 24th Street — those are sideshows compared with Mission Street. Basically what you are starting to see is what Mission Street will look like in the 21st century.”
Add a Comment
§What's next?
by Mission resident
Monday Jan 13th, 2014 3:33 PM
This was on the first, we are now almost at the middle of the month.

I hope there will not be another six month wait until the next action, like there was between the Google-bus-pinata-bashing and this.
Add a Comment
Support Independent Media
We are 100% volunteer and depend on your participation to sustain our efforts!