by Alex Darocy (alex [at] alexdarocy.com)
Today, on Christmas Day, Santa Cruz Food Not Bombs served a free vegan holiday meal to hundreds of community members outside of the downtown post office. The temperature was in the 70s, people played music, activists tabled, and the mood was celebratory. [top video: Keith McHenry, scroll down for photos]

Copy the code below to embed this movie into a web page:
Download Video (17.7MB) | Embed Video
Food Not Bombs co-founder Keith McHenry helped organize the meal, and he reports that many of FNB groups across the country would be sharing vegan meals on Christmas this year in response to an increased need due to new cuts in food stamps and an extreme reduction of access to food during the holiday season.

McHenry awarded Santa Cruz volunteer Jeane the Five Carrot award for being one of the people dedicated to making sure the Saturday meal at the post office happens every week. The post office has been the regular location for Santa Cruz Food Not Bombs weekly servings for over a year now on Saturdays, and McHenry announced that they could be expanding to serve free meals on Sunday as well.

McHenry encouraged everyone to eat more and take food with them because they cooked for a thousand people. 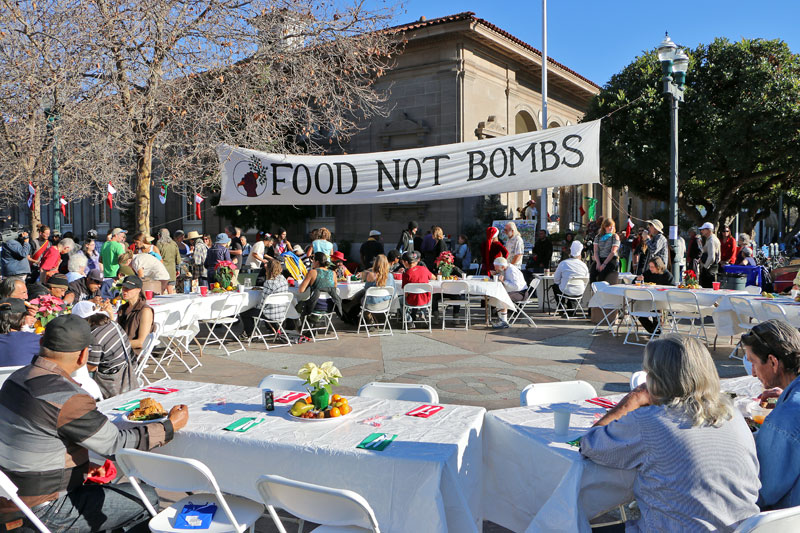 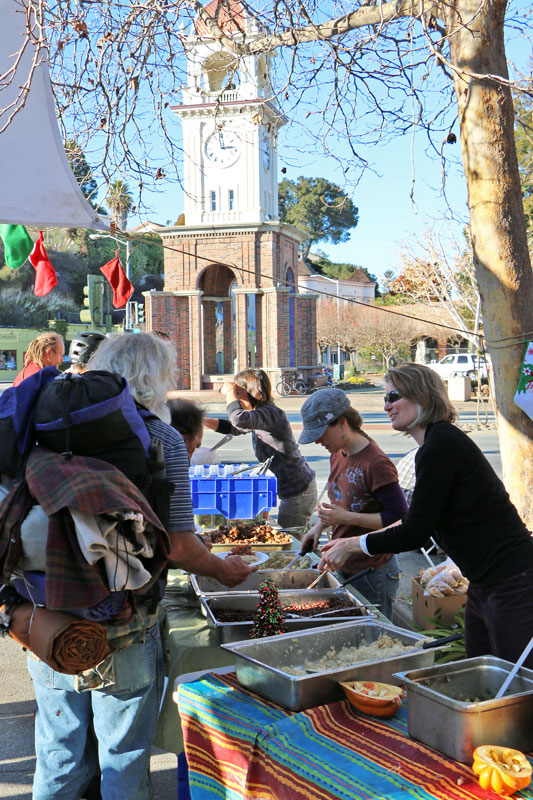 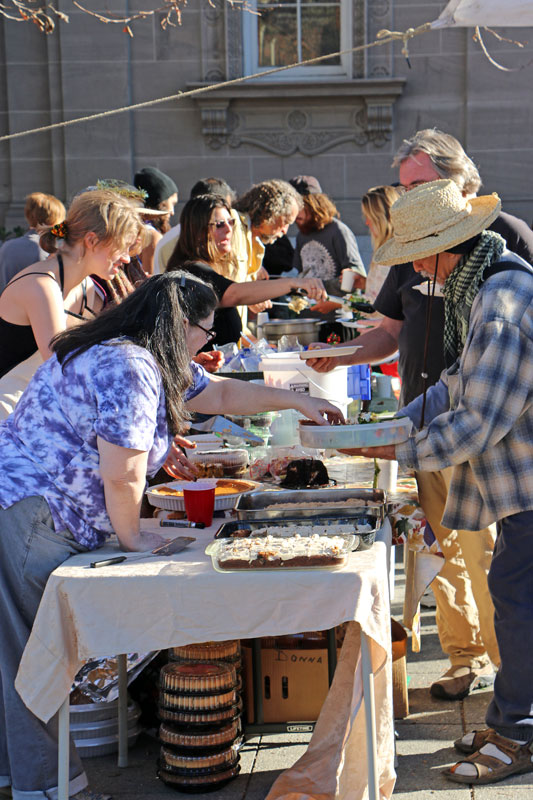 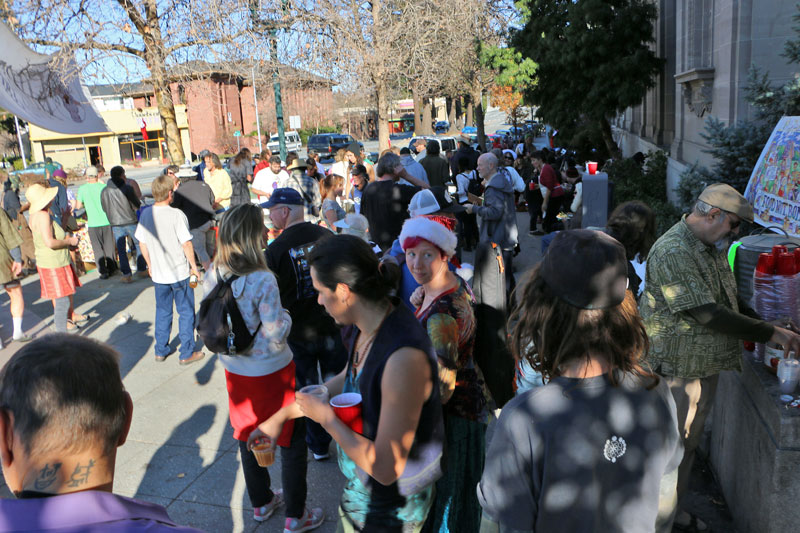 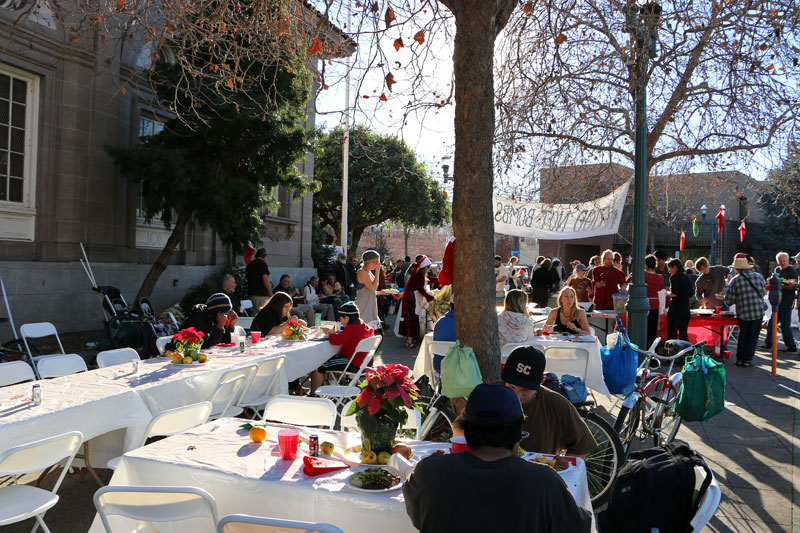 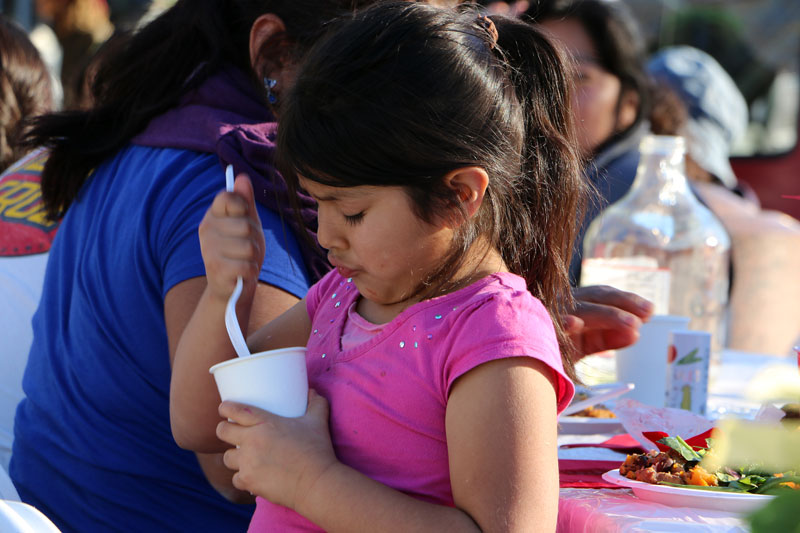 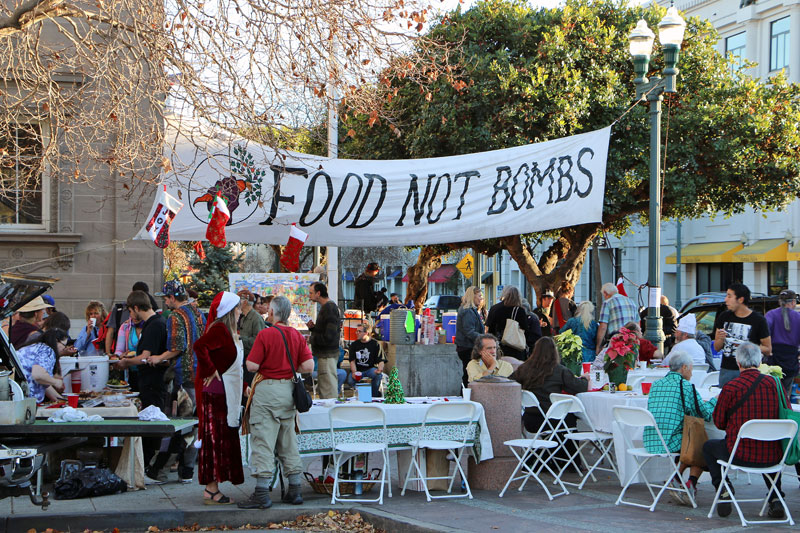 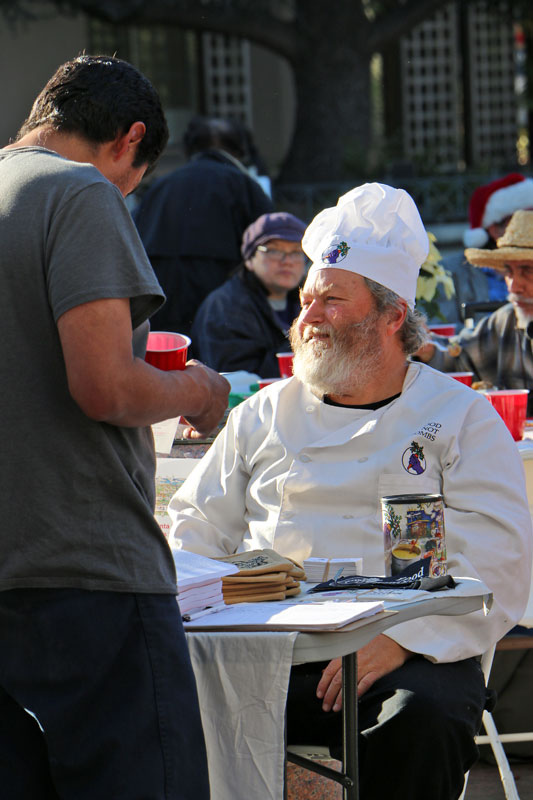 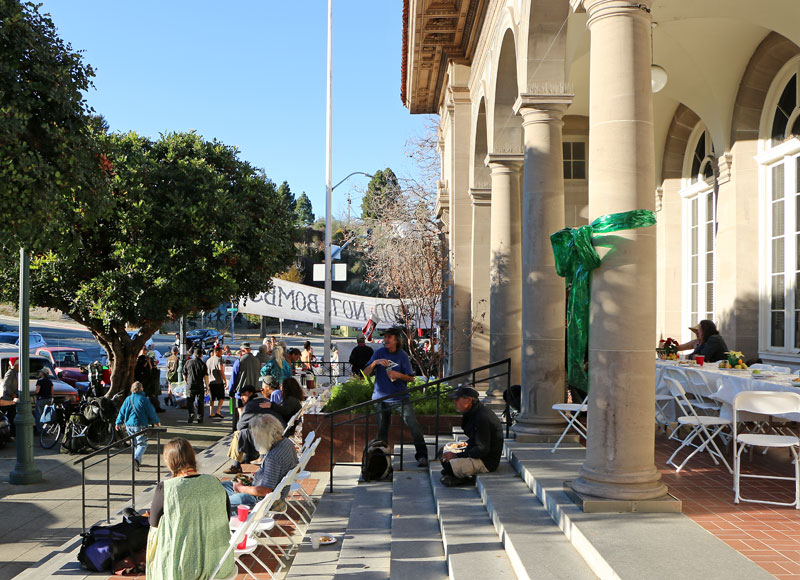 §Main Entrance of the Post Office
by Alex Darocy 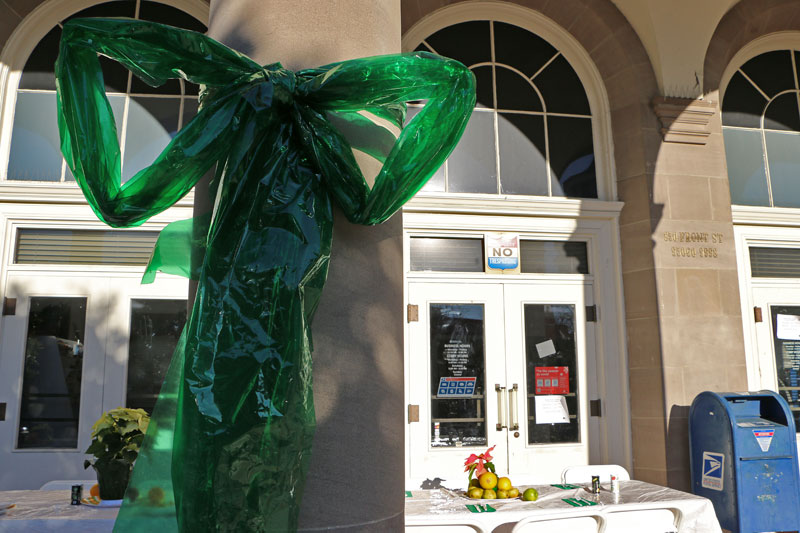 Add Your Comments
Comments (Hide Comments)
§Awesome
by a. revolutionary
thanks FNB. what a great turnout, at least 10 times the normal. you people consistently take it to the streets in a direct action that helps people. you are an example to the rest of us of what effective activism looks like.

bow on the pillar was a nice touch.
Add a Comment
§Awesome!
by Grateful
It was great to see such a turnout. Direct activism at its best. Action, not words! Thanks HUFF (Robert Norse) and FNB (Keith McHenry) for stepping up and making it happen!
Add a Comment
§Interview with Jeane
by FTL
Jeane, the winner of the 5 Carrot Award in above video
interviewed on Free Radio Santa Cruz:

Keith not only was one of 8 who started FNB in the 70's back in Cambridge, but rarranged his crowded, cramped, and cash-poor schedule to stay an extra week to pick up the ball that Santa Cruz charities dropped.

I had little to do with the meal other than interviewing Keith, providing support for Becky's Cafe HUFF table, and interrupting eaters with microphone in hand to get updates.

Keith says he'll be on the radio tonight (6-8 PM--somewhere in there) to give a 15 minute update on Santa Cruz and elsewhere.
Add a Comment
§seventies
by gerry g.
''drivin' that train, high on whole grains''...
Add a Comment
§Thin skinned little potatoheads
by Razer Ray
Where's my comment go?

Nice spectacle but the food was almost inedible. One of these days FNB will learn that Vegan/Vegetarian food doesn't have to be awful looking/bland tasting slop. Just ask Joe Shultz. Vegetarian food SHOULD be yummy.

FNB DOES cook for large quantities of people right? No one even knew enough to take into account the reduced water necessary to cook a large quantity of brown rice which turned the short-grain rice to literal mush.

Further, the people over by the War Memorial who were giving out free cookies and milk offered their remaining two gallons of milk to the FNB people who refused it b/c the feed was ALLEGEDLY "Vegan". But it wasn't. There was ALL SORTS of white sugar products and butter for the bread. So much for collaborating, coalition-building, and alliances with other interested parties.


(Critique: They should have simply taken it graciously, even if they weren't going to use it directly, and donated it to someone who would use it.)

I wouldn't have recommended the 'meal' to someone who wasn't literally starving if I knew it was going to be that bad. Instead of focusing on a THOUSAND PEOPLE, who by any rational expectation were NOT going to show up, FNB should have focused on making edible food.

I can only imagine the slop they served depressed some people more than they already were about being alone for the holidays.


Further, from an email exchange with one of FNB's Fangirls:

Honestly, I was personally more concerned with their refusal to take the milk from a "straight" member of Santa Cruz community who already had a kind enough heart to sit out there giving away cookies and milk to everyone who happened by. I hope it didn't dampen their Xmas spirits. I KNOW it confused and dampened their interest in FNB-SC, because they told me so.

It speaks VOLUMES about the organizers' utter contempt for public perception, which KSBW's interview will do nothing to repair, and FNB-SC's overall cooperative abilities of which they have none.

Clowns, Opportunists, Codependents. Just like HUFF, where most of you learned to be stupid and call it "Organizing"

Jeanne is control freak, who, at Occupy, told HUNGRY PEOPLE the VERY little bit on their plate was all they were going to get... in very hostile tone of voice. No love lost for the local "FNB" by the Drum Circle folks who were expected to stop what they were doing and troop down to Joze for an FNB feed... instead of FNB going to them.

The people doing the FNB feeds 5 years ago understood that. They used to come to the Farmers Market circle and feed. But they were college students, not 'organizers-in-a-vacuum'.

Lame... Cultlike, and nothing resembling the national FNB. More closely resembling HUFF's idiocy, of which you're all affiliated enablers. NO ONE will "Follow you" except junkies winos and speedfreaks scavenging ANYTHING ANYONE offers, NOR IS IT FNB's STRATEGY to get people to come to them. You're SUPPOSED to go to where the people are.

FYI, and not entirely intending to entirely demean FNB's VOLUNTEER'S efforts, at about 6:30 Christmas evening everyone who was downtown ran into hordes of people giving away Xmas dinners, Tamales, Burritos, and Xmas treats. Some were Xtians, some not. some were Mexican families, because Mexicans understand hunger, and edible food... Nevertheless the tendency of you all to be 'legends in your own minds' deserving some sort of special credit just for assuming the mantle of FNB and cooking up slop for 1000 ASTOUNDS me.

Tell Keith I said that..

Add a Comment
§(Disabled) homeless people need (warm) meat and protein too
by John Cohen (karma [at] cruzio.com)
My sister was so inspired about serving cookies at the Food Not Bombs Holiday meal, that after seeing (disabled) homeless people — especially children — need (hot) meat dishes and protein for a healthy diet, she would like to fill this void with or without the support of Food Not Bombs.

In his talk at the Penny University last week, Keith McHenry explained that Food Not Bombs wouldn't have been successful if they had served meat because someone would have eventually gotten sick causing problems with the authorities and liability issues.

My sister would like to get several homeless households — the most vulnerable and ones with children — on the lists for weekly food donations from Grey Bears and some churches who give out staples. Then she would like to store the food — hopefully someone or some business can facilitate this, and cook warm dishes like soup and stew 2-3 times per week.

My sister appreciates advice from any people who have done this before, like people who have operated soup kitchens, to do this without running afoul of the health authorities and removing liability issues.