A “narco-corrido” concert by “El Komander” had been promoted to take place in Cherán, Michoacán at 3pm on December 15th, 2013. El Komander is known for singing about organized crime and in particular about the Gulf Cartel. Even though the Gulf Cartel isn’t active in the Purépecha plateau, where the community of Cherán is located, community members clarify that they are absolutely against any type of organized crime organization and the activities that revolve around them, including narco-corridos of any type. 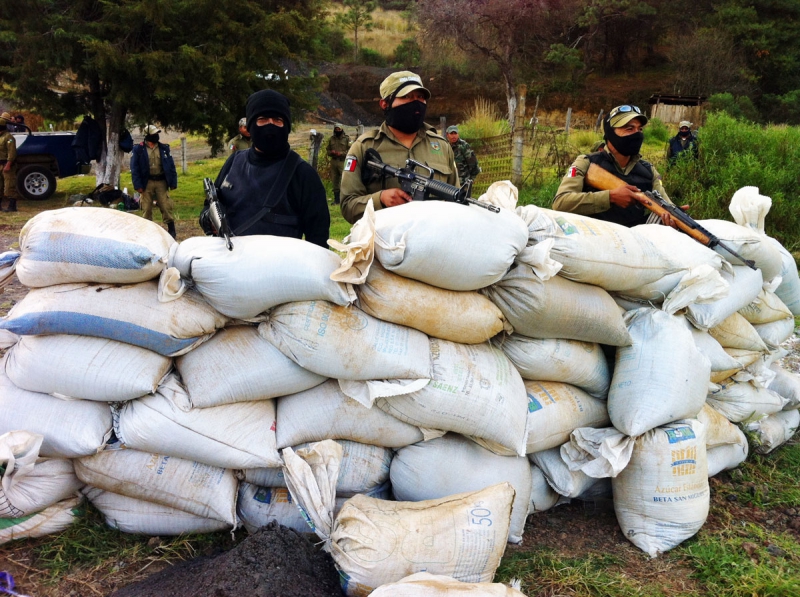 original image (1200x896)
Narco-corridos have become extremely popular among Mexican youth who have been consistently desensitized to narco-violence and corruption within the Mexican state. A variety of artists can be seen aligning themselves and their music with rivaling cartels through songs that tell real-life tales of the drug trade in Mexico.

On April 15th, 2011 the community of Cherán, Michoacán rose up against the local cartel that was taking control of their daily lives through murders, rapes, extortion, kidnapping, disappearances, charging protection money, the illegal exploitation of forests in the region and even cases of modern-day slavery. Members from the indigenous Purépecha community declared that local, state and even federal authorities were complicit with organized crime in the region and were no longer working in the interest of the community.

Community members declared their community “ungovernable” and they kicked out political parties, the mayor and local and state police from their community and have now returned to a traditional indigenous form of self governance, which includes general assemblies as the primary decision making process in the nearly 20,000-person community. A rotating traditional general council was elected by community members, and a traditional form of community self-defense was reinstated. The community “ronda” is now completely in charge of the community’s safety and security.

Since the traditional community ronda has been active, organized crime activity has dropped to almost nothing, however there is a consistent threat that cartels will try to make their way back into the community. This holiday season it seems that the organizers of “El Komander’s” concert were intent on taking advantage of holiday festivities to sneak this concert into town. It also seem like an attempt at testing the community’s firmness with regards to these types of events.

Community members and the traditional self-governance council told the event organizers that the concert would not be allowed to take place, despite promotions and ticket sales, which had already taken place. The community ronda set up a barricade as a sort of checkpoint just ahead of the concert location to detain concert goers, send them back on their way and to defend the community from any sort of reprisals that organized crime thugs may have attempted. With an overwhelming show of force, and the participation of members from the main government council and the justice and honor council, the community of Cherán was able to prevent the event from taking place. This is an extremely rare victory in the battle for hearts and minds within this supposed drug war.
http://elenemigocomun.net/2013/12/cheran-p...
§Video
by El Enemigo Común (uploaded by WeCopwatch) Sunday Dec 22nd, 2013 4:25 PM
Copy the code below to embed this movie into a web page:
Download Video (58.5MB) | Embed Video
http://elenemigocomun.net/2013/12/cheran-p...
Add Your Comments