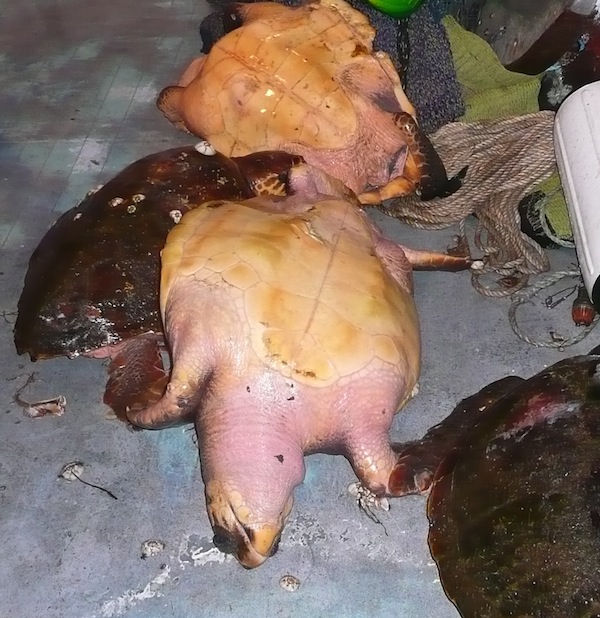 The Congressional letter seeks to pressure the Obama administration to step up its efforts to end the excess sea turtle bycatch in Mexico. The U.S. requires its fishermen to stop netting and hooking loggerheads, but Mexico refuses to do the same. Instead Mexico is denying that fishing nets are killing the sea turtles.

The bycatch rate of loggerheads in Baja Mexico gillnets is among the highest in the world — and it is jeopardizing their continued survival. Last summer a horrific 600 percent increase in dead sea turtles was observed in Gulf of Ulloa along Baja's Pacific coast. A shocking 705 loggerheads washed up dead on one stretch of shoreline in just two months. Sea turtle scientists estimate over 2,000 loggerheads were killed last year in gillnets alone off of Baja's coast. Take action here: http://action.seaturtles.org/p/dia/action/public/?action_KEY=12788

In January, the United States officially “identified” Mexico for its unsustainable loggerhead bycatch under the U.S. Protected Living Marine Resources statute, which requires nations to be formally identified, certified and sanctioned for failing to adopt bycatch measures comparable to U.S. protections.

If Mexico doesn't act to stop the turtle bycatch, it faces a U.S. trade embargo.

In May, Turtle Island Restoration Network and Center for Biological Diversity filed a legal petition with the Obama administration seeking a ban on Mexican seafood or other imports to the U.S. until Mexico reduces its sea turtle mortality. Read more here: http://www.seaturtles.org/article.php?id=2468

Congress members who signed the letter about bycatch of Baja Mexico sea turtles were: