Add an Event
Newswire
Calendar
Features
Home
Donate
From the Open-Publishing Calendar
From the Open-Publishing Newswire
Indybay Feature
Publish to Newswire
Add an Event
Related Categories: California | San Francisco | Education & Student Activism | Labor & Workers
Stop Privatization of Public Education & Union Busting! No More Public Money To Charters,
by United Public Workers For Action
Wednesday Dec 11th, 2013 2:24 PM
On December 9, 2013 the AFT and NEA along with over organizations called for a national day of action to "reclaim education". The call included support for making the "common core" pushed by the Gates Foundation and other privatizers. At the same time the call for the rally did not mention privatization and the use of charters to destroy public education. 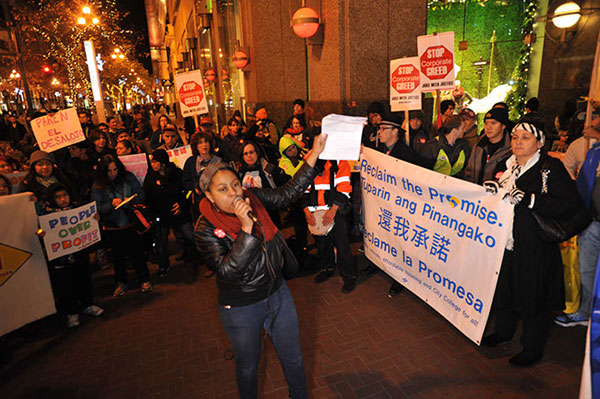 Public education is under a frontal attack organized and supported by the Democratic president Obama, his Education Secretary Arnie Duncan with the billionaires like The Gates Foundation, Broad Foundation, The Bechtel Foundation and Fisher family GAP Foundation which funds the KIPP schools.

In San Francisco, the SFUSD Superintendent Caranza has supported bullying of students and teachers along with para-professionals at the MLK Middle School and he has allowed the principle Natalie Eberhard and former Assistant Principle Anthony Braxton to engage in criminal activity despite the complaints of the students, teachers and community. They are seeking to destroy public education and push more consultants and charter schools in San Francisco.

Their plan is to set up privately run charter schools that can destroy education unions and siphon off billions in public funds. Salesforce Inc is being given a free hand by the superintendent without opposition from the UESF tops to reshape public education by and for the 1% billionaires who run San Francisco and the US.


In California, Governor Jerry Brown with the support of his wife Ann Gust who was chief counsel to the GAP has appointed privatizers to the State School Board of Education and the Commission On Teacher Credentialing CTC and they have bullied and fired state whistleblowers like Attorney Kathleen Carroll and others who discovered systemic financial conflicts of interests. This was covered up by Democratic Senate leader Darrel Steinberg and California Assembly leader John Perez who both support privatization through more charter schools.

We need a state and national campaign against privatization of public education and public services and a halt to all public money going to so called “public” charters. We need to demand that California Attorney General Kamala Harris prosecute the many government officials and school board members who have financial interests in charter schools or companies like Pearson Inc. that are benefiting from privatization and the testing scam being pushed by Obama and even the AFT and NEA in "common core". The AFT and NEA leadership have called this rally against "the excessive use of standardized testing" yet they continue to support the "Common Core" and good charters such as Green Dot.
Their demand in the December 9 national action is to make the "common core" better.
"• Organizing against the excessive use of standardized testing;"

Unfortunately as well, President Randi Weingarten of the AFT who is on the board of InBloom and the leadership of the NEA have taken millions of dollars from the Gates Foundation and other pro-privatization foundations to push the "common core" and also support the supposedly good charter schools like the for profit "Green Dot" chain.
http://www.aft.org/newspubs/press/2011/071111a.cfm
http://susanohanian.org/core.php?id=632

The AFT, NEA and SEIU continue to support the very politicians who are personally benefiting from privatization of education like John Burton, who is chairman of the California Democratic Party and on the board of University of Phoenix as well as Diane Feinstein whose husband Richard Blum who is pushing privatization of UC and benefiting from debt that students are forced to take out loan.

Blum Capital Partners has illegally profited from ripping off the UC Pension system and he is a dominant shareholder in two of the nation’s largest for-profit universities, Career Education Corporation and ITT Educational Services, Inc.
http://www.berkeleydailyplanet.com/issue/2010-06-22/article/35661

Union supported Congresswoman Nancy Pelosi has also opposed further government regulation of these for profit schools that Blum and Burton have investments in. This corrupt relationship between the Democrats and the privatizers must be exposed and fought and that means fighting the continued support for the Democrats by the UESF, AFT and all unions in California and nationally. We are giving money to the very people who are privatizing education like Congressional Democratic leader George Miller who pushes more charter schools and "No Child Left Behind" and "Race To The Top".
http://democrats.edworkforce.house.gov/sites/democrats.edworkforce.house.gov/files/documents/ESEA2013-DemSubSupport-NACSA.pdf


The San Francisco Democrats like Ed Lee want to privatize CCSF and also the Democratic board of Supervisors have voted to give Twitter and the rest of these billionaires more tax breaks while cutting public services and attacking public workers pensions and healthcare benefits in San Francisco. Prop A which was backed by the leadership of the UESF and AFT 2121 blamed public workers for the crisis and helped vulture capitalists like Mark Farrell push their anti-labor agenda.

The United Public Worker For Action UPWA is for stopping all public funding for charters with a statewide ballot initiative. We are for shutting down all support for "common core" and stopping the workplace bullying that is going on in education against the teacher and students and against the BART and other public workers. The continued reliance on the "good" Democrats to "save" SF city college and public education is disarming working people and giving these union busters more time to destroy public education. It is time to tell the truth and unite all education workers, students their families and all workers to defend public education and all public services. 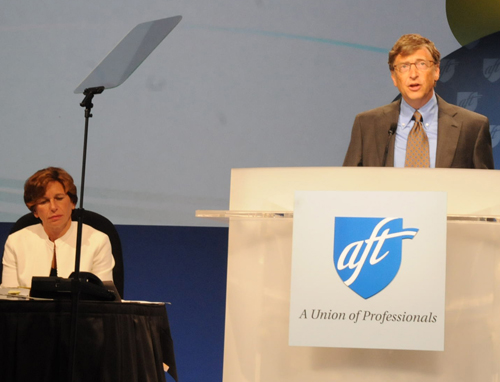 AFT president Randi Weingarten along with the NEA leadership has taken millions of dollars from the Gates Foundation and other privatizers to implement the reactionary "common core" and to support privatization of education. Weingarten also invited Bill Gates to attend an AFT convention where a walkout took place among some members.
https://www.upwa.info/documents/Public%20E...
Add Your Comments
LATEST COMMENTS ABOUT THIS ARTICLE
Listed below are the latest comments about this post.
These comments are submitted anonymously by website visitors.