State, Class, Alienation, and Geopolitics in the Arab Spring 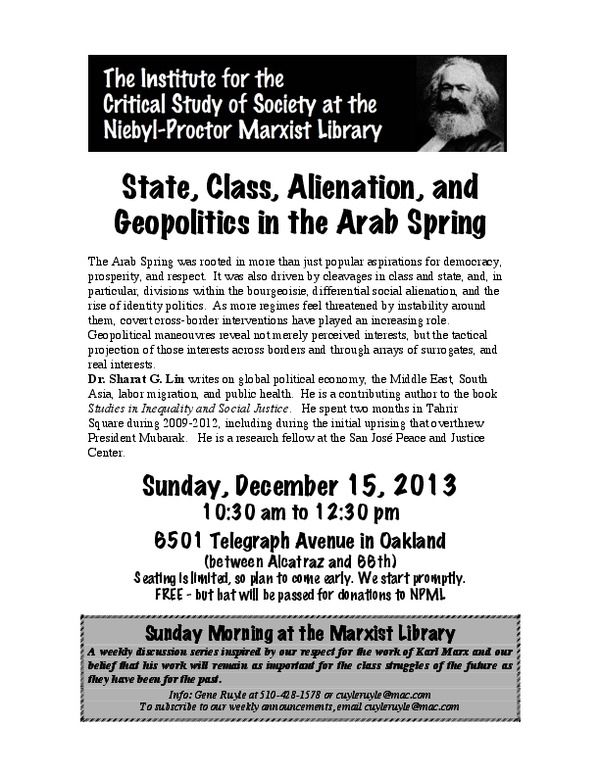 State, Class, Alienation, and
Geopolitics in the Arab Spring

The Arab Spring was rooted in more than just popular aspirations for democracy, prosperity, and respect. It was also driven by cleavages in class and state, and, in particular, divisions within the bourgeoisie, differential social alienation, and the rise of identity politics. As more regimes feel threatened by instability around them, covert cross-border interventions have played an increasing role. Geopolitical maneouvres reveal not merely perceived interests, but the tactical projection of those interests across borders and through arrays of surrogates, and real interests.
Dr. Sharat G. Lin writes on global political economy, the Middle East, South Asia, labor migration, and public health. He is a contributing author to the book Studies in Inequality and Social Justice. He spent two months in Tahrir Square during 2009-2012, including during the initial uprising that overthrew President Mubarak. He is a research fellow at the San José Peace and Justice Center.

6501 Telegraph Avenue in Oakland
(between Alcatraz and 66th)
Seating is limited, so plan to come early. We start promptly.
FREE - but hat will be passed for donations to NPML


Sunday Morning at the Marxist Library

A weekly discussion series inspired by our respect for the work of Karl Marx and our belief that his work will remain as important for the class struggles of the future as they have been for the past.

END_OF_DOCUMENT_TOKEN_TO_BE_REPLACED
Added to the calendar on Sat, Dec 7, 2013 7:06PM
Add Your Comments
Support Independent Media
We are 100% volunteer and depend on your participation to sustain our efforts!