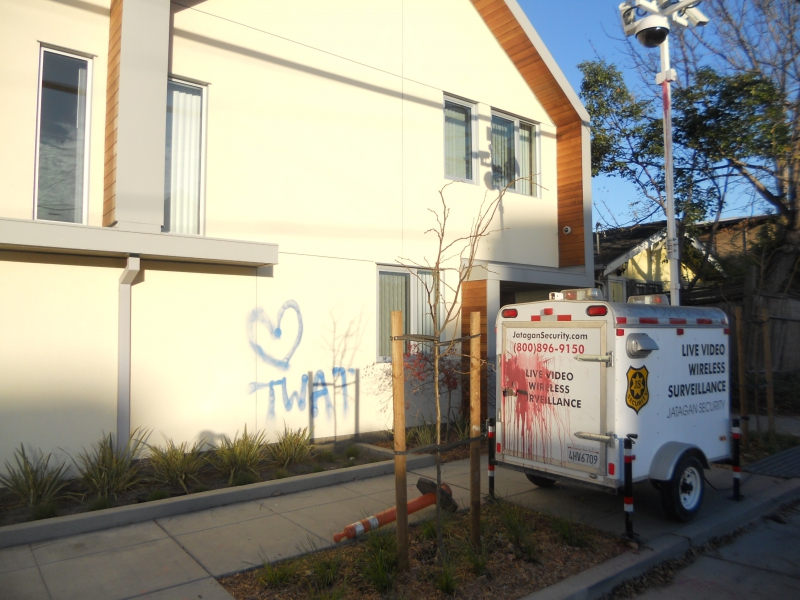 original image (2592x1944)
In the early morning hours of December 6th, paint bombs sailed into a camera tower protecting the gentrification condos on 36th and Adeline St. in Oakland, CA. Pink paint splattered onto the instruments of surveillance, and the bandits left a cryptic tag before disappearing into the night.


As women moving through this society, we find ourselves constantly under the male gaze. Strangers evaluate our bodies everyday. Our images are taken, altered, and force-fed back to us everywhere we look. Men in government and business further invade our lives with surveillance cameras whenever we dare to move out of the domestic sphere and into public space.

As those who live in and love Oakland, we recognize the proliferation of surveillance technology as part of the gentrification machine. They make yuppies feel safe and comfortable. They make people of color, the poor, the marginalized, the subversive, feel uncomfortable and unwelcome. Our autonomy is being leeched from us. Security is terror.

As anarchists, we recognize increasing surveillance as an attempt to suppress dissent. The imminent creation of the Domain Awareness Center - a public-sponsored, privately run entity that aims to integrate all surveillance footage in Oakland - exposes the complete and total enmeshment of state and corporate interests. With the DAC, there will no longer be any "private" cameras. All images will be aggregated, and mined for information. This means that everything is fair game.

As Oakland anarchist women, we're sick of the machismo and militant posturing combined with little concrete action to back it up. We're sick of proving our competence and radicalism enacting an agenda written by anarchist men. We're sick of infighting. If we can't all work together, we can at least respect and support one another from a distance. Let our rivalries be productive. It's time to go back to basics. It's time to remember who our enemies are.

To the state we say nothing.

To all those fighting the DAC, who have seen their pleas at city hall fall on deaf ears, we issue an invitation to join us in taking the next logical step.

To all the radical women and transfolks fighting for space and respect, stop relying on men to validate you. They don't own militancy. Get with a few badass ladies and git 'er done. It's way funner. We promise.

And to all the insurrectionary dudes negating from their armchairs, we issue a challenge. Form a Camover team and come get it. We will whoop your fucking ass.


Give the State Pink Eye.

much love from the
Technophobic.
Women's.
Action.
Team.