Add an Event
Newswire
Calendar
Features
Home
Donate
From the Open-Publishing Calendar
From the Open-Publishing Newswire
Indybay Feature
Publish to Newswire
Add an Event
Related Categories: Santa Cruz Indymedia | U.S. | Environment & Forest Defense
Petition Seeks to Reform Secretive Federal Agency That Kills Millions of Wild Animals
by Center for Biological Diversity
Tuesday Dec 3rd, 2013 6:48 PM
WASHINGTON— The Center for Biological Diversity and allies petitioned the Obama administration today (see PDF) to reform the federal wildlife-killing agency known as “Wildlife Services,” which kills nearly 1.5 million coyotes, bears, otters, foxes, birds and other animals each year without any requirement to disclose its activities to the public. The secretive killing — which includes aerial gunning, traps and exploding poison caps — has gone on for decades with little public oversight or rules requiring the use of the best available science or techniques to reduce the deaths of nontarget animals. 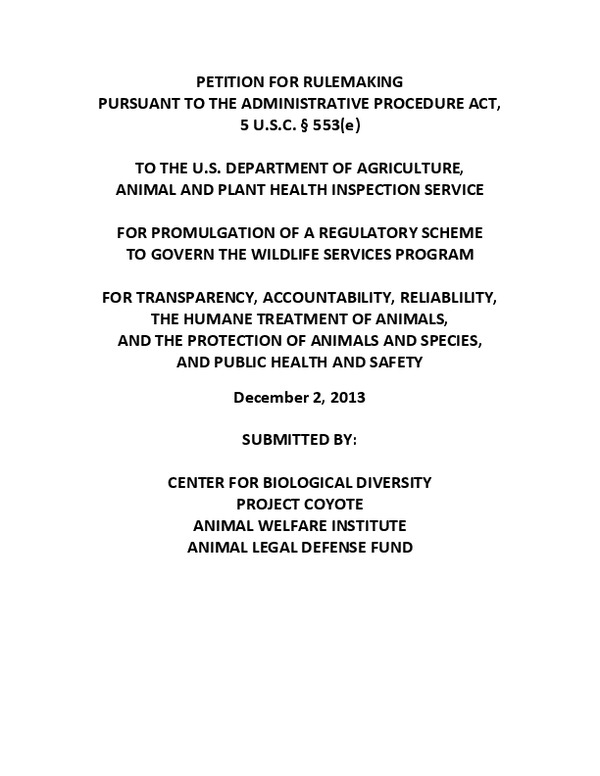 “Wildlife Services is an out-of-control, rogue agency that shoots, snares and poisons more than a million native animals every year, many unintentionally — including at least 13 endangered species,” said Amy Atwood, a senior attorney at the Center for Biological Diversity and the primary author of the petition. “Despite calls for reform by members of Congress, scientists and the public, Wildlife Services is still operating without the kind of legally binding regulations that ensure transparency and accountability to the taxpaying American public, creating a free-for-all that should have been ended decades ago.”

The petition calls for the agency to:

* Develop regulations to ensure use of the best science when determining whether action should be taken against animals;
* Avoid killing nontarget animals, including endangered species;
* Ensure ethical treatment of targeted animals and exhaustion of nonlethal means; and
* Require release of reliable information to the public about the animals it kills.

A response to the petition is required by law; any decision is subject to review by the courts.

“For far too long Wildlife Services has run roughshod over America’s wildlife,” said Camilla Fox, founder and executive director of Project Coyote. “We call on the USDA to clean house and bring Wildlife Services into the modern era of predator conservation and stewardship by adopting rules that justify their actions and that allow for public input and the integration of ethics, economics and science-based ecology.”

Under various names, Wildlife Services has killed millions of animals since the early part of the 20th century, targeting native carnivores like coyotes and foxes, prairie dogs, birds and many other species at the behest of agribusiness interests. The agency contributed to the decline of gray wolves, Mexican wolves, black-footed ferrets, prairie dogs, and other species during the first half of the 1900s, and continues to impede their recovery today.

“Wildlife Services has long ignored sound science in establishing its priorities, instead taking its cues from ranchers and other ‘cooperators,’ ” noted Carson Barylak, federal policy advisor at the Animal Welfare Institute. “The influence of these private interests has taken precedence over the ecological principles that should be guiding the agency’s decisions, and wildlife is suffering as a result.”

According to the agency’s own figures, which likely underestimate the total death toll, the agency has killed more than 22 million native animals since 1996, representing 476 different species. The past five years have been some of the most active for the agency, with more than 1.5 million native animals killed per year. The agency reports that it kills an average of nearly 4,000 nontarget native animals annually, including at least 13 endangered species, such as Louisiana black bears, Mexican gray wolves, wood storks, Hawaiian stilts, island foxes and roseate terns.

“Wildlife Services has contributed to the endangerment of several species, such as wolves and grizzly bears, that play pivotal roles in the food chain and have been the subject of extensive recovery efforts,” said Atwood. “The agency is a major threat to North American wildlife and must be reined in and held accountable.”

Wildlife Services employees routinely engage in unlawful or inhumane activities, refusing to fire or discipline agency employees who are known to break the law or cause animal suffering. The agency is also notoriously secretive, shielding most of its activities from scrutiny, and routinely covering up a substantial portion of its animal killings.

Lead petitioners include Center for Biological Diversity, Project Coyote and the Animal Welfare Institute. The Animal Legal Defense Fund signed on as a supporting petitioner.

Project Coyote (ProjectCoyote.org) is a national, nonprofit organization promoting compassionate conservation and coexistence between people and wildlife through education, science and advocacy.

The Animal Welfare Institute (awionline.org) is a non-profit charitable organization founded in 1951 and dedicated to reducing animal suffering caused by people. AWI engages policymakers, scientists, industry, and the public to achieve better treatment of animals everywhere — in the laboratory, on the farm, in commerce, at home, and in the wild.

http://www.biologicaldiversity.org/news/press_releases/2013/wildlife-services-11-03-2013.html
Add Your Comments
Support Independent Media
We are 100% volunteer and depend on your participation to sustain our efforts!