Add an Event
Newswire
Calendar
Features
Home
Donate
From the Open-Publishing Calendar
From the Open-Publishing Newswire
Indybay Feature
Publish to Newswire
Add an Event
Related Categories: Santa Cruz Indymedia | Health, Housing & Public Services | Police State & Prisons
Off-Duty SCPD Cop Draws Gun on Salvation Army Food Seeker
by Robert Norse and Colin Campbell Clyde
Friday Nov 29th, 2013 2:44 PM
Several witnesses at the Tuesday Salvation Army Thanksgiving Meal including the mother of the victim reported that Officer Hernandez assaulted Jasmine Byron by knocking a plate of food out of her hand, threatening her with his gun, and subsequently taunting her from his car. Hernandez's stated objective: to stop Jasmine from trying to take a plate of food out the door after having she said she'd asked permission to do so. 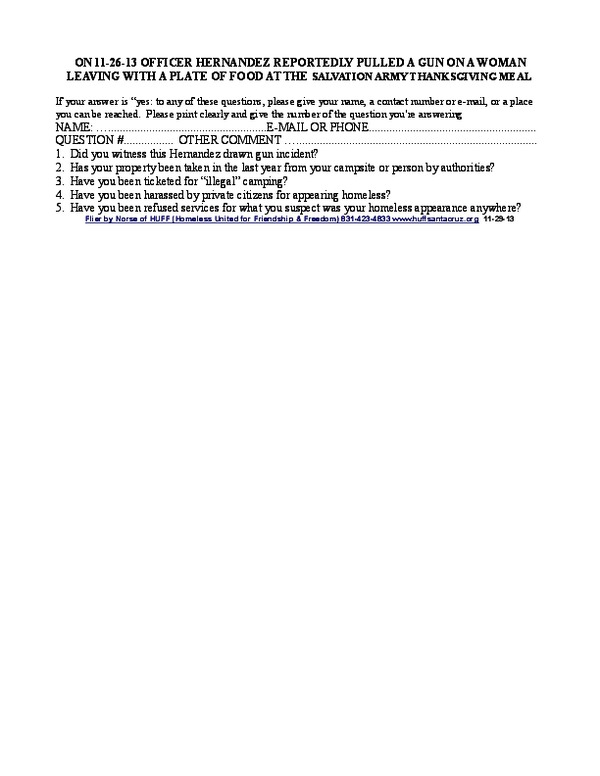 Download PDF (66.6KB)
Yesterday on the stream of Free Radio, I interviewed Jasmine Byron and her husband Shade, who witnessed Hernandez's assault. The first hour of the audio stream (after a silence of 12 minutes or so) at http://radiolibre.org/brb/brb131128.mp3 presents that interview along with commentary from Colin Campbell Clyde. He summarized his understanding of what happened. His account was initially posted on the Citizens for a Positive Santa Cruz, a new website, started to address issues and people banned from Steve Pleich's Citizens for a Better Santa Cruz site.

"Officer Hernandez pulled a gun on my friend Jasmine and pointed it at her face at close range while volunteering off-duty at a Salvation Army Thanksgiving meal. Apparently this was super-necessary to prevent her from "stealing" a plate of leftover food, which he also knocked out of her hand, spilling the food all over the floor, the wall, even the ceiling. A few minutes later, Hernandez bragged and gloated about what he'd done. Her whole family is in shock and her mother has been having panic attacks since the incident.

Is this what people had in mind when "We Support Our Police" poster went up all over town when some cops were murdered earlier this year? Why was this man-boy wearing a gun to volunteer at a community event? Is the city or the legal system going to ANYTHING to reign in this loose cannon before he hurts someone again, perhaps more seriously next time? Or do cops get immunity to commit crimes (assault and battery in this case) in Santa Cruz, even when they're not at work?"


MORE NOTES FROM NORSE
Jasmine and Shade Byron play sweet music on Pacific Avenue and at the Farmer's Market in a group known as The Dirty Pines. This serious, public, and callous incident of assault and battery followed by harassment--if accurately described by witnesses--is likely to be covered up and rolled past. KSBW did interview Jasmine at the scene, but I've not heard that they've played it. Police declined to come though they were called.

When Jasmine and her mother went to the police station and reported the crime there, one of the interviewing officers was Officer Vasquez, whose spring sidewalk-smashing of Richard Hardy on video (http://www.santacruzsentinel.com/localnews/ci_23092865/homeless-man-injured-during-arrest ) has yet to be concluded--or at least no such announcement has been made.

In the hours and days that followed, Jasmine and her mother also stated they suffered post traumatic stress syndrome symptoms (headaches, panic attacks, inability to sleep, disorientation, irrational [rational?] fear of police, etc.]. A Salvation Army worker who witnessed the event reportedly broke down in tears.

Councilmember Micah Posner was twice advised about the situation but has not replied to my phone calls (831-227-4772) nor has Mayor Robinson, who also received word of the assault at the Thursday Civic Center Thanksgiving Meal (when she served me pumpkin pie). SC Patch police publicist Brad Kava was also informed, but I've not seen anything on SC Patch about the issue.

My accounts come from those who were directly impacted by Hernandez's behavior. I encourage others who witnessed this incident to post or contact me at 831-423-4833.
§In Addition
by Robert Norse Friday Nov 29th, 2013 2:51 PM
Jasmine said that Hernandez's stated rationale for slapping the food plate out of her hand and then pulling his gun was the Salvation Army's "rule" that food was not to be taken outside. She says as someone with a stomach condition that did not allow her to eat much at a meal and with the permission of Salvation Army workers, she was trying to leave with a plate of food, partially covered by her coat.

When Hernandez demanded to search her, she refused--which, she suggests, he regarded as an intolerable threat to his authority, provoking what they describe as his violent behavior, the drawing of the gun, and the subsequent waving it in her face and shoving it in her back.

Jasmine and Shade go into more of these details on the audio file. They also noted that many people had plates of food outside, so even without explicit "permission" and that it was not an uncommon practice.
Add Your Comments
LATEST COMMENTS ABOUT THIS ARTICLE
Listed below are the latest comments about this post.
These comments are submitted anonymously by website visitors.