Populations of critically endangered Pacific leatherback sea turtles continue to slide toward extinction due primarily to capture and death as bycatch in commercial fisheries, according to the new IUCN Red List assessment by the world's leading sea turtle scientists. 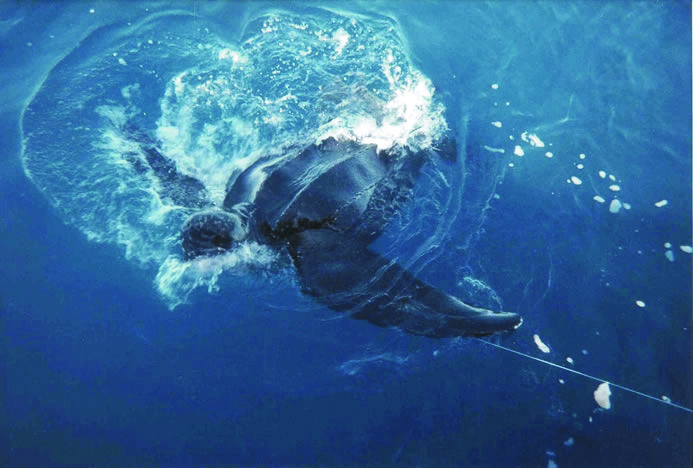 "Some fisheries managers will seize on this information to push for higher takes of leatherbacks in commercial fisheries around the world -- which is the primary threat to the long-term survival and recovery of leatherbacks particularly in the Pacific," said Teri Shore, Program Director of Turtle Island Restoration Network. "It is a mixed message for leatherbacks."

As few as 2,071 mature adult leatherback sea turtles (males and females) remain in the entire Pacific Ocean, and the new IUCN Red List assessment predicts a 96 to 99 percent total population decline by 2040. Both the Eastern and Western Pacific leatherback populations were ranked as critically endangered populations in urgent need of protection from fisheries and direct harvest to avoid extinction.

The Red List Assessment names fisheries bycatch as the biggest threat to leatherbacks globally, along with human consumption of eggs, meat, or other products, and coastal development followed by pollution and climate change. Scientists have warned that the Pacific leatherback sea turtle may become extinct within 10-30 years if its adult mortality from industrial fishing bycatch is not drastically reduced.

"While the Red List is based on science and designed to prevent extinction, the misinterpretation of the science by seafood interests could undermine the conservation of endangered leatherbacks," said Shore.

Longline fishing is a primary threat to the survival and recovery of leatherbacks, which get hooked on the fishing gear and drown. However, even with extinction on the horizon, the number of leatherback sea turtles allowed to be captured and killed in the Hawaii longline fleet was raised this year from 16 to 26 by National Marine Fisheries Service.

In California, a push to re-open longlining for swordfish along the West Coast prompted a recent longlining fishing project in the Pacific Leatherback Conservation Area. The results confirmed the wasteful nature of the gear with 98 percent of the fish caught not swordfish but blue shark and other non-target species.

The U.S. government also allows fish from foreign longline fleets to be sold in the U.S. even though they don't meet domestic fishing standards for protection of sea turtles, and hundreds or even thousands of leatherbacks every year on the High Seas.

Leatherback sea turtles are the largest sea turtles on the planet. Some of these turtles, weighing between 550 and 2,000 pounds with carapace lengths of up to six feet or nine feet from head to tail, migrate across the Pacific Ocean to feed in waters off the U.S. coast. Leatherback sea turtles have been protected under the Endangered Species Act since 1970, and in February 2012 the United States designated critical habitat in more than 40,000 square miles of coastal waters off Washington, Oregon and California, where leatherbacks feed on jellyfish.

Turtle Island Restoration Network (SeaTurtles.org) is an international marine conservation organization headquartered in California whose 60,000 members and online activists work to protect sea turtles and marine biodiversity in the United States, Costa Rica, Australia and around the world.