Newswire
Calendar
Features
Home
Donate
From the Open-Publishing Calendar
From the Open-Publishing Newswire
Indybay Feature
Publish to Newswire
Add an Event
Related Categories: International | Environment & Forest Defense | Labor & Workers
International Trade Union Confederation joins other NGOs in walkout protest at COP19
by Takver - Climate IMC
Thursday Nov 21st, 2013 8:33 AM
The International Trade Union Confederation has joined many Civil society organisations in leaving the climate change negotiations today on mass in protest at the lack of progress in climate change negotiations and the level of corporate support and sponsorship at this COP in Warsaw. 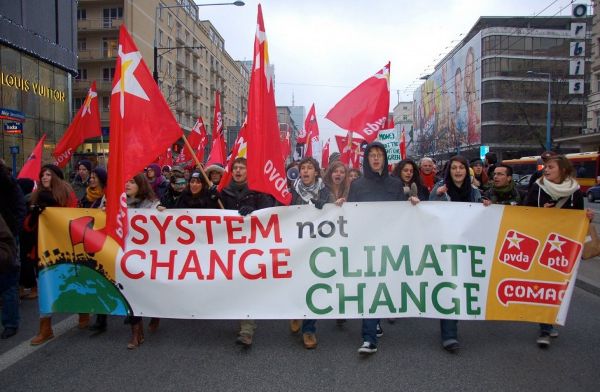 Members from Greenpeace, Oxfam, WWF, Actionaid, Friends of the Earth, the International Trade Union Confederation and 350.org all started leaving the conference at 2pm today. This is an unprecedented action, the first time major civil society groups have staged a mass walkout.

Sharan Burrow, General Secretary, ITUC, released a statement saying that at a time when climate science was warning of devastating impacts, democratic leaders have failed us in these negotiations. The ITUC observers walked in protest with the other NGOs.

”We have been shocked by some of the wealthiest nations including Canada and Australia showing a lack of responsibility for ambitious targets and with almost all developed nations failing to commit vital finance and even questioning the need for ’just transition’ measures for the world’s workers and their families.

“Trade unions remain optimistic on the capacity of social dialogue to ensure that Japan returns to the negotiations next year in Lima, Peru, with renewed ambition and leadership.

“The corporate dominance which is on show here is unacceptable. It is the same companies that advocate environmental and social responsibility that exploit workers and the environment through their supply chains.

“The ITUC will now mobilise workers around the world to ensure that democratic governments are held accountable for jobs, rights and the vital investment in transformational technologies in all sectors to ensure full employment and decent work,” said Sharan Burrow.

The following statement was issued jointly by the NGOs that chose to leave. Some 800 people left the conference.

We have said we stand in solidarity with the millions impacted by Typhoon Haiyan, and with all climate impacted people. Our solidarity compels us to tell the truth about COP 19 – the Warsaw Climate Conference.

The Warsaw Climate Conference, which should have been an important step in the just transition to a sustainable future, is on track to deliver virtually nothing. In fact, the actions of many rich countries here in Warsaw are directly undermining the UNFCCC itself, which is an important multilateral process that must succeed if we are to fix the global climate crisis.

The Warsaw Conference has put the interests of dirty energy industries over that of global citizens - with a “Coal & Climate Summit” being held in conjunction; corporate sponsorship from big polluters plastered all over the venue; and a Presidency (Poland) that is beholden to the coal and fracking industry. When Japan announced that it was following Canada and backtracking on emission cut commitments previously made, and Australia gave multiple signals that it was utterly unwilling to take the UN climate process seriously, the integrity of the talks was further jeopardized.

This week saw a “finance ministerial” with almost no actual finance, and loss and damage talks that have stalled because rich countries refuse to engage on the substance of an international mechanism. Warsaw has not seen any increase in emission reductions nor increased support for adaptation before 2020 – on these things it has actually taken us backward. And a clear pathway to a comprehensive and fair agreement in Paris 2015 is missing.

We as civil society are ready to engage with ministers and delegations who actually come to negotiate in good faith. But at the Warsaw Conference, rich country governments have come with nothing to offer. Many developing country governments are also struggling and failing to stand up for the needs and rights of their people. It is clear that if countries continue acting in this way, the next two days of negotiations will not deliver the climate action the world so desperately needs.

Therefore, organizations and movements representing people from every corner of the Earth have decided that the best use of our time is to voluntarily withdraw from the Warsaw climate talks. Instead, we are now focusing on mobilizing people to push our governments to take leadership for serious climate action. We will work to transform our food and energy systems at a national and global level and rebuild a broken economic system to create a sustainable and low-carbon economy with decent jobs and livelihoods for all. And we will put pressure on everyone to do more to realize this vision.

Coming out of the Warsaw Climate Conference, it is clear that without such pressure, our governments cannot be trusted to do what the world needs. We will return with the voice of the people in Lima to hold our governments accountable to the vision of a sustainable and just future.

ORGANISATIONS AND SOCIAL MOVEMENTS ASSOCIATED WITH THIS STATEMENT:

§Re-tool the entire industrial revolution.
by Union Jack
Thursday Nov 21st, 2013 2:04 PM
Coal, gas, oil, and atomic energy is destroying the planets livability and therefore the ecological green organic revolution has brought into being the hi and low tech tools to put in place wind, tidal, and solar power which transforms to electricity and is more power than all the societies can use. No more blackouts. This non-pollution solution is given freely in natures kinder laws and provides work for all and forever more.

End pollution wars, not endless wars for more and more pollution. Workers of the world unite!! You yet have a world to win!!
Add a Comment
Support Independent Media