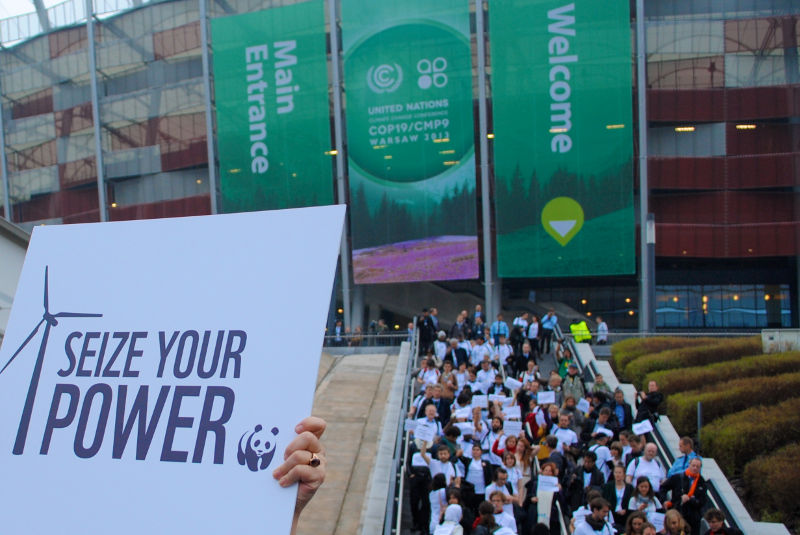 The UN climate negotiations in Warsaw “should have been an important step in the just transition to a sustainable future”. Groups are dismayed that it “is on track to deliver virtually nothing.” NGOs have decided to voluntarily withdraw from the talks that have not yet “put the interests of global citizens over those of dirty energy industries.”

Hadji Singh from Actionaid International reminded us about the gravity of the situation. “Nature is not going to wait for us, look at the disasters people are facing. We need money to so that people can deal with climate impacts.” Finance has been one of the key issues discussed in Warsaw.

The walkout came about after discussions last night that were led by global south NGOs expressing frustration at the corporate nature of these negotiations. Tasneem Essop from WWF believes that this walkout represents “one of the broadest fronts of civil society organisation, ranging from environmental organisations, development organisations, social movements, and labour movements.”

It’s this very diversity that is celebrated by civil society that often leaves bystanders confused. The Verb spoke with individuals from a variety of groups, and all highlighted different and at times conflicting reasons for walking out. Government delegates were no less confused with a number looking on bemused before rushing off to their next meeting.

NGOs estimate that 800 individuals participated. Hoda Baraka of 350.org was quick to note that “we are not walking out of the process.” Many are planning on returning to Peru for the next round of talks in 2014. Collin Rees of SustainUS explains that “we are going home to build a stronger movement so people realise how important these negotiations are”.

Those that can’t wait that long, or conversely recognise the role that civil society can still play in the remaining days, will be back by tomorrow. Alden Meyer from the Union of Concerned Scientists has no doubt that “those of us still inside are also angry” but hopes to still be able to build on top of the walkout results from the inside.

Not everyone is convinced that the process is worth coming back to. Susann Scherbarth from Friends of the Earth Europe “doesn’t think a 2015 agreement will happen” and that the G8 or G20 are not plausible alternatives.

The plenary was still in session as the walkout occurred and negotiations continue to proceed. Only time will tell if the walkout did have any direct impact during these Warsaw talks.

By Linh Do with reporting from The Verb’s COP19 team, photo by Jeppe Fischer.

The original of this story is from The Verb. Reproduced with permission. The Verb is a newswire service focusing on the stories that matter. They are currently reporting from COP19. Follow them on Facebook and Twitter.