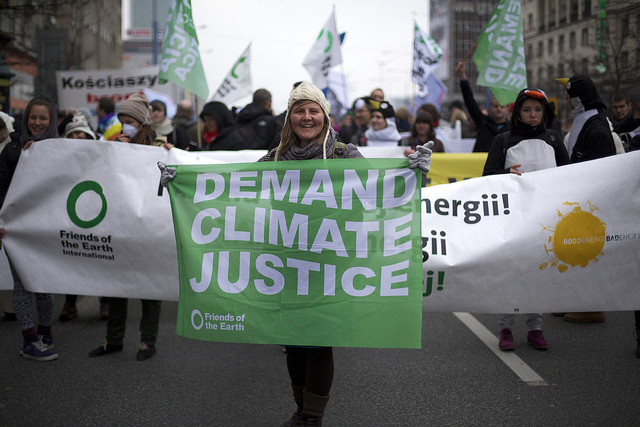 FoE International called on governments of the developed nations for greater levels of ambition, to honour the promises they had made to provide finance to help poorer countries to cut their emissions and to adapt to the impacts of climate change.

The gravity of the situation was made clear: "We are in a planetary emergency. It is known more than ever that climate change is happening. The impacts we are facing are threatening and will become worse. We are in an urgent situation that we have to act. We have to act in a very fast period."

This FoE panel included Silje Lundberg from Young Friends of the Earth Norway, Jagoda Munic the FoE International chairperson and representatives from FE Poland, Europe and Malaysia. Friends of the Earth is a grassroots environmental and social justice organisation with more than 2 million members in 74 countries around the world.

The three areas of greatest concern articulated at the media briefing are: the very low levels of ambition pre 2020, let alone after 2020; the lack of progress in contributions to the Green Climate fund promised to be $100 billion per year by 2020; and no support from developed countries for a loss and damage finance mechanism for countries already feeling the impacts of climate related disasters in droughts, floods, rising seas or storm damage.

The previous evening the Group of 77 (G77) composed of developing countries and small island states walked out of negotiations at 4.00am after the intransigence and blocking of richer countries, in particular by the behavior of the Australian delegation who bracketed all the text. The negotiations had actually been making some progress up till then. In Doha last year the parties all agreed to discuss the institutional arrangements for discussing loss and damage - compensation to developing countries when we fail to mitigate and fail to adapt sufficiently. Developing countries in Warsaw at the beginning of the meeting put forward a very well developed proposal for a new international mechanism to be agreed here in Warsaw on loss and damage.

"The Developing countries have pushed back on this, they don't want a new mechanism. They want this discussed under an adaptation committee. That is the sticking point." said an observer from IIED at a Climate Action Network briefing before the FoE briefing, "this is an issue very dear to the heart of the small island states and the least developed countries who are spearheading this. They are being supported and given a lot of solidarity by all the other G77 countries. There is a huge amount of solidarity and unity on this issue, and the politicians and ministers who are here will be sticking firm on this demand in Warsaw."

It is clear that Australia is playing a very destructive role at these negotiations, but it is being assisted by Canada, Japan and Poland and even Europe in lowering the level of ambition. In comparison, the USA looks somewhat constructive in the negotiations, not because they have done anything, but because everybody else around them appears to be going backwards.

Where is the climate justice in these negotiations? 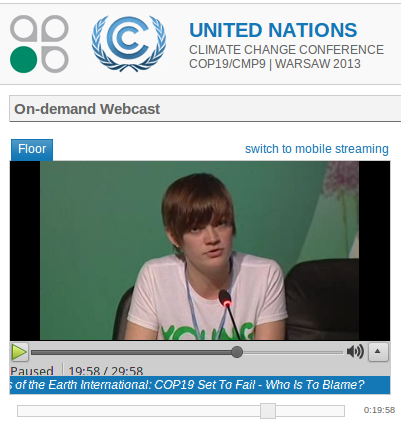 Silje Lundberg from Young Friends of the Earth Norway made a particularly moving speech on the absence of climate justice in these negotiations at Warsaw.

So for Young Friends of the Earth Europe climate justice is what you need to have if we are going to solve this problem, this gigantic problem that we are facing.

What we need to have is both justice for the past, what already has happened, and justice for the future. Those are linked together and need to be resolved together. This means that future generations, my generation shouldn't be doomed because of something that our fathers or grandfathers did in the developed world. So we need to solve the climate crisis now before it gets too late, but at the same time we need to solve it keeping in mind what happened in the past. We cannot forget the historical responsibility that the rich countries have in solving this. That is what they are trying to do in these talks. It looks like they are going to get away with it as well, and we cannot let them do that.

Often young people are told that 'it is so good that you are involved, so magnificent that young people are raising their voices', but at the same time when we raise our voices, what happens? We get thrown out of this COP. That is what happened on the opening day of this COP when 3 people, young activists, got thrown out for showing solidarity with the Philippines. So that is how young people are treated here. At the same time we are told that you are tomorrow's leaders, and that is bullshit because we are the leaders of today. Cause our politicians are failing us. Our politicians in the rich world are failing us. They are not willing to be leaders. What they are doing is just being politicians, just talking, more worried about the next election, than being worried about one of the biggest challenges that this world is facing.

No matter what is going to happen in this COP, we won't get what we need. Why won't we get that? Because the developed countries are not willing to give it to us. They are not willing to raise their ambitions, they are not willing to give us the money for mitigation, the money for adaptation in the developing countries. So what we need more than ever is we need civil society to keep pressuring them at home, so it doesn't end up being at this COP and we have a new COP next year and then everything is going to be solved. We need to basically give them hell, we need to give them hell back home. Thank you

A question from the floor asked if civil disobedience should be used by young people when no progress is being made.

Ms Lundberg replied that civil disobedience is the last option after all other avenues have failed, that is when you should use civil disobedience. "In Norway we have won against the oil industry, we have been preserving the areas in the north away from the oil industry because we stopped the rigs when they were going there. So of course it is the way to go. But I think you have to combine it with and build a public movement, try to build the public support. Try to talk to the politicians, but when they stop listening, when it doesn't work anymore, then you break the law."

See the write up of this media conference from Young Friends of the Earth Europe: COP19 set to fail - who is to blame? 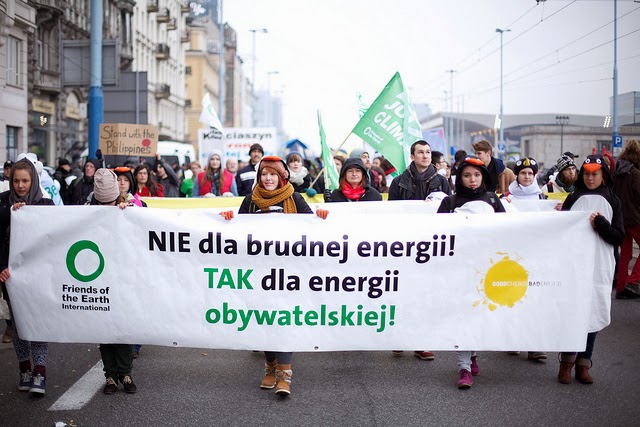