Add an Event
Newswire
Calendar
Features
Home
Donate
From the Open-Publishing Calendar
From the Open-Publishing Newswire
Indybay Feature
Publish to Newswire
Add an Event
Related Categories: Americas | California | U.S. | Education & Student Activism | Health, Housing & Public Services | Racial Justice
Southern California Native American community shows support for their Lakota relatives
by Corina Roberts (redbirds_vision [at] hotmail.com)
Saturday Nov 16th, 2013 7:34 AM
Redbird's blanket, toy and school supplies drive and mini-powwow welcomes everyone, and this year will be attended by two well known traditional style powwow drums, powwow royalty, and a host of singers and dancers representing tribes throughout the western hemisphere. There is no cover charge and the doors are open to all nations, native and non-native, coming with or without donations. 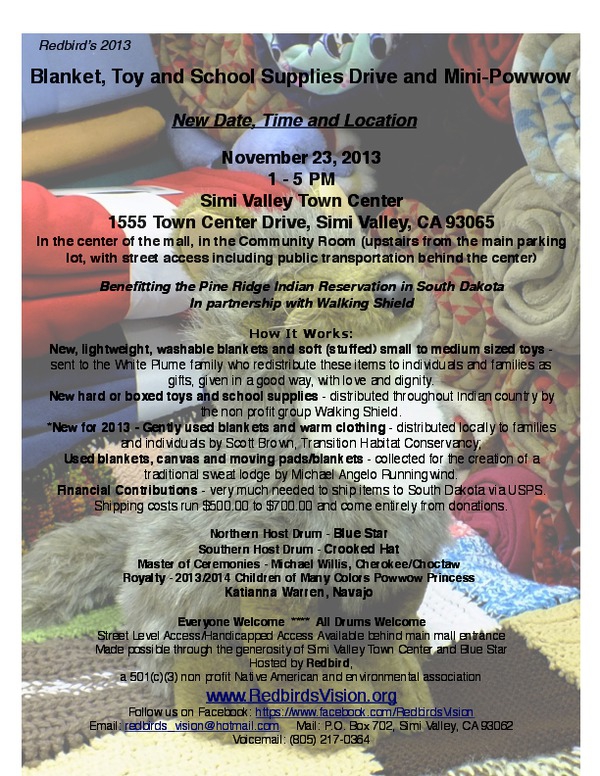 Download PDF (695.7KB)
The southern California Native American community will show their love and support for their brothers and sisters of the Lakota nation on November 23, in an event that has taken place annually for 19 years and at numerous venues. Redbird’s 2013 blanket, toy and school supplies drive and mini-powwow will be held in a Simi Valley shopping mall this year, and last just four hours…but there will be a northern drum, a southern drum, a powwow princess, and dancers that represent a broad slice of the western hemisphere.

The event welcomes everyone and is successful because if the generous support of the local - and sometimes not so local - community which comes each year bringing a wealth of donations.

The northern traditional drum Blue Star has supported the toy erie with their beautiful songs for a number of years, and the reason for their dedication - and their willingness to drive so far to sing for just a few hours - is two-fold. They love to sing. And the songs they sing were taught to them, and given to them to sing, by the Lakota people of Porcupine, South Dakota, on the Pine Ridge Indian Reservation.

There was a time and not too long ago when those traditional songs were being forgotten. The style of singing was being left behind in favor of more contemporary powwow singing styles. In southern California, there weren’t very many singers who knew the old Lakota songs and if they did, they weren’t passing them on. In a living culture, songs and memories stay alive because they are handed down from one person to another and shared…shared with the community…so when a song is sung and people hear it, they know it, and they go to the drum, and they sing the song.

Somewhere around 2006, the Blue Star drum began showing up at powwows and singing, and it wasn’t long before their hearts and voices re-captured the circle. On Saturday, November 23, members of the drum will be driving from San Diego to Simi Valley and then south again to Orange County as soon as it is over to take part in a powwow hosted by Southern California Indian Center.

Members of the southern drum Crooked Hat have often been part of the toy drive, but this is the first time the whole drum is coming to sing. For the members of the drum, including John Rutherford, Paul Caldera and Guillermo Bartelt, Redbird has been a part of their lives for almost two decades through the Children of Many Colors Powwow, a family-style Native American gathering held annually at Moorpark College. Representing nations from California to central America, Crooked Hat’s songs are also sung in an old style, unique to southern California’s intertribal native culture.

Michael Angelo Runningwind will have the first dance - a grass dancer, he will make the way clean for us in a spiritual sense, as grass dancers did in the physical sense in days of old, pressing down the tall grass to make way for other grass dancers to follow. Redbird’s first ever Powwow Princess Katianna Warren of the Navajo Nation will join us. Dr. Michael Willis of the Cherokee/Choctaw nations will act as our Master of Ceremonies for the day, as well as dance in the northern traditional style. Dr. Willis is a Veteran, having served in the U.S. Army, and has earned the right to his regalia on many levels.

The purpose of the gathering is collect new, lightweight, warm, washable blankets which are distributed to individuals and families in South Dakota. The redistribution is done not by another non profit group or government entity, but by the White Plume family, respected traditional Lakota leaders, tribal elders and warriors. There’s a reason for doing it this way.

When Alex White Plume offers the blankets and toys he receives to the people of his community, his tiyospaye or extended family, he gives them as gifts. They are given not as charity but wight eh love that a gift comes from someone you know, respect, cherish. For a proud people surrounded by a way of life they did not choose for themselves, that is important.

Symbolically, a blanket is a gift of love, but when temperatures in the Dakotas fall below freezing for months at a time and people huddle in homes that cannot keep out the cold, sometimes without any source of heat, a blanket is ore than a symbol of love. It’s a means of survival.

New warm clothing - jackets, scarves, gloves, thick socks, beanies, boots, coats, warm pajamas - White Plume family. Please make sure they are labeled something like “new- for White Plume family” so they don’t get mixed up with other items.

The items sought, and where they go, are as follows:

New blankets (lightweight so they can be shipped, warm, washable) including hand-made quilts/afghans/wraps/baby blankets are shipped to the White Plume family.

New soft (stuffed) small to media sized toys are snuggled in with the blankets and also shipped to the White Plume family as space and shipping donations allow.

Hard-edged, boxed and all other toys are donated to Walking Shield who has a reservation distribution network which includes South Dakota.

New for 2013 - Gently used warm clothing items for distribution locally by Scott Brown of theTransition Habitat Conservancy. Scott is best known for his work preserving and restoring natural environs in our high desert regions, but he is also working to help the disadvantaged and homeless human population in that same region.

Also new for 2013 - We are gathering used blankets, canvas and moving blankets to help a group of native people who are building a sweat lodge and need coverings for that lodge. Michael Angelo Runningwind has requested these.

The cost of shipping the blankets and soft toys is usually $500.00 to $700.00, and will be paid for entirely through donations received at or for the toy drive. Redbird has no financial reserves to cover the shipping costs and encourages those who would like to support this effort, but cannot attend, to consider making a monetary donation for shipping. Donations can be made via U.S. Mail and are fully tax deductible, acknowledged with a letter. The mailing address is Redbird, P.O. Box 702, Simi Valley, CA 93062. Donations can also be made via Paypal using the email address redbirds_vision [at] hotmail.com. (Underscore between redbirds and vision).
While the goal of the drive is to gather donations, no one who comes in a good and respectful manner will be turned away, whether or not they have blankets, toys or shipping contributions. The mini-powwow is an opportunity to experience the songs and dances of native people, to laugh and talk together, to come away with a better understanding of how it is that native cultures have survived and continue to survive in today’s world. 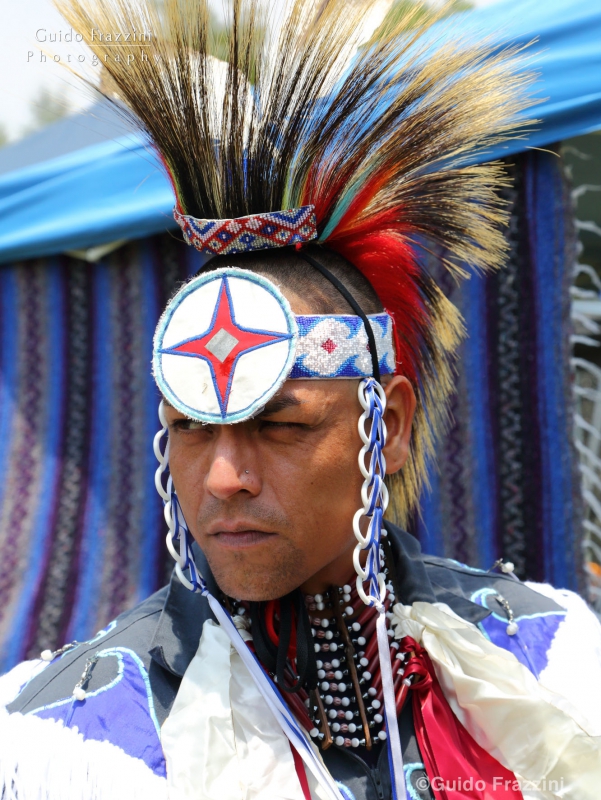 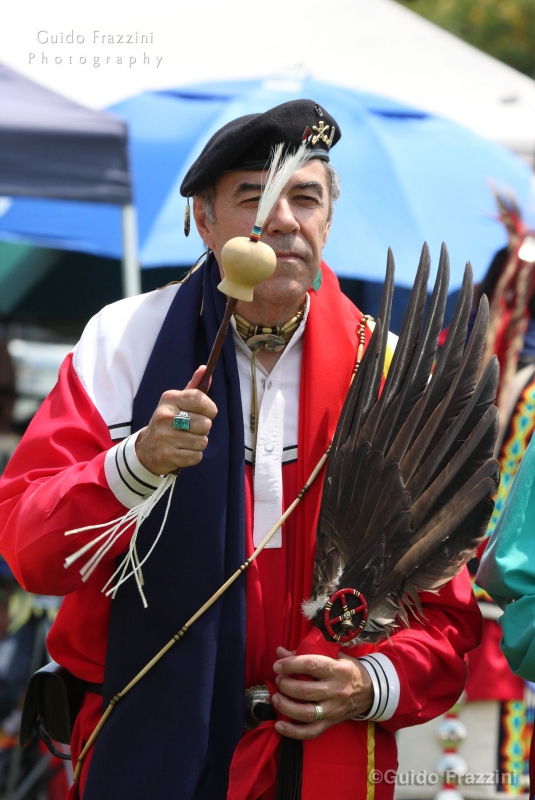 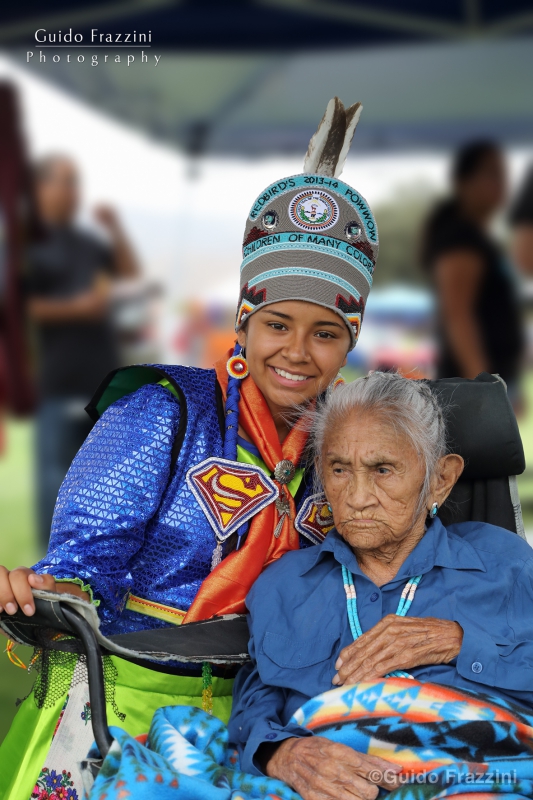 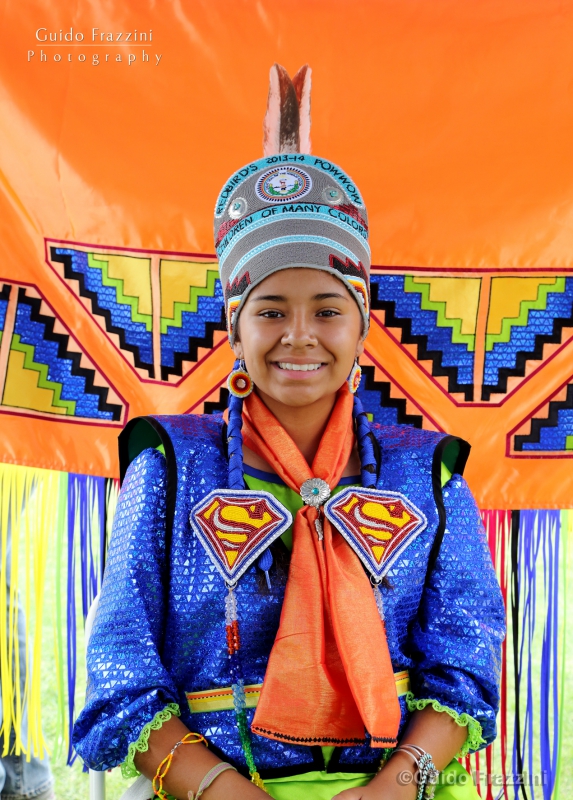 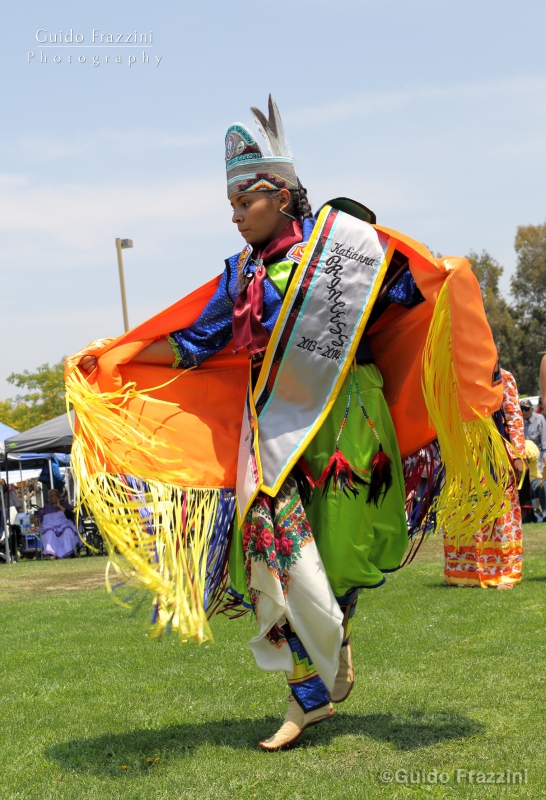 original image (1209x1771)
2013-2014 Powwow Princess inaugural dance, Children of Many Colors Powwow, photo by Guido Frazzin, Saturday, July 20 2013
http://www.RebirdsVision.org
Add Your Comments
Support Independent Media
We are 100% volunteer and depend on your participation to sustain our efforts!