Add an Event
Newswire
Calendar
Features
Home
Donate
From the Open-Publishing Calendar
From the Open-Publishing Newswire
Indybay Feature
Publish to Newswire
Add an Event
Related Categories: International | North Bay / Marin | Environment & Forest Defense
Youth observers expelled from UN climate change talks in Warsaw for Philippines Solidarity
by Takver - Climate IMC
Thursday Nov 14th, 2013 9:36 PM
Justice is being demanded from the UNFCCC leadership to reverse its decision to take away the badges of 3 youth observers who were expressing their solidarity with the Filipino people suffering from the massive loss and destruction brought about by Typhoon Haiyan (Yolanda). 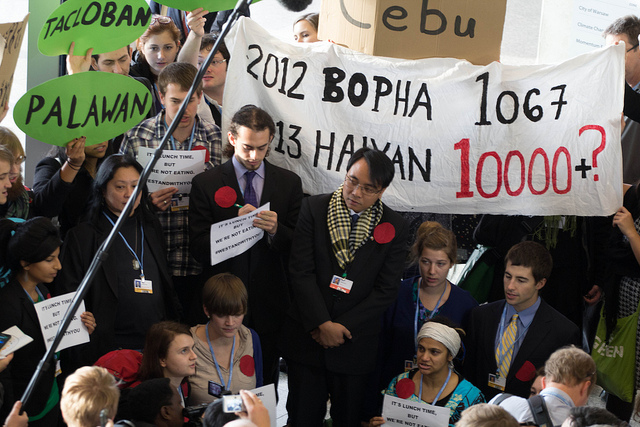 Three youth observers were ejected by security from the COP19 conference on Monday and had their accreditation withdrawn for 5 years. They had expressed solidarity with a non-sanctioned banner and signs after Philippines negotiator, Naderev Saño (Yeb Saño) left the main plenary after making his impassioned plea: "time to take action. We need an emergency climate pathway".

Clémence Hutin from Young Friends of the Earth Europe, and Graham Thurston Hallett and Maria Alejandra Escalante from Earth in Brackets were attending their first COP. The 3 activists were later informed they were being banned indefinitely from the negotiations on the express orders of Christiana Figueres, the UNFCCC Exec Secretary. (@CFigueres). And not just for this conference, according to Hallett and Escalante's blog, they have been banned from attending UNFCCC conferences for 5 years!

According to a FoE Europe media release:

The UN climate talks opened on Monday in the backdrop of the devastating impacts of Typhoon Haiyan one of the strongest storms ever to hit landfall.

Yeb Saño, climate commissioner for the Philippines made an electrifying and emotional appeal for action on climate. Delegates held an unprecedented 3 minute silence in solidarity, and Mr. Sano broke down recounting how his brother was digging dead bodies out with his bare hands.

In an arrangement with the Philippines delegation to demonstrate their solidarity with those impacted by this climate disaster, civil society were to accompany Mr. Sano from the plenary hall to a side-event. UN-security were informed of the gesture some minutes prior to the action and a green light was given. Despite authorisation, the three young people accompanying Mr. Sano, who unfolded a sign with the names of some of the devastated Filipino towns in a gesture of solidarity, were reprimanded by security and ejected from the UN halls.

Clémence Hutin from Young Friends of the Earth Europe, and Graham Thurston Hallett and Maria Alejandra Escalante from Earth in Brackets were attending their first COP. The three youth activists were subsequently informed that on the express orders of Christiana Figueres, the UNFCCC Exec Secretary, they were being banned indefinitely from the negotiations.

"We find the decision from the Executive Secretary of the UNFCCC, Christiana Figueres, unprecedented and exaggerated. This is a decision that needs to be undone, so Maria, Clémence and Graham can join us for the rest of the climate talks," said Maruska Mileta from Young Friends of the Earth Europe.

"To ban young people from the climate summit, for simply showing solidarity with the people of Philippines is deeply unjust. Not only for the youth who were evicted, but also for the entire civil society - this decision sends a very worrying message to civil society all over the world," said Lucas Burdick from Earth in Brackets.

"The UN climate conference is covered in the names of some of the biggest polluting companies who are sponsoring the event, yet the names of the communities impacted by climate change can't be shown? Christiana Figueres needs to think about what message she wants the world to see," said Lucy Patterson from Push Europe.

The Philippine Movement for Climate Justice issued a statement on Facebook and at a press conference at COP19: 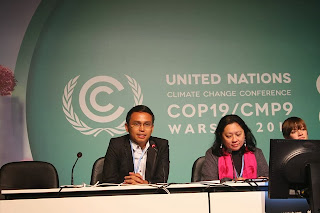 Justice for an Act of Solidarity

The Philippine Movement for Climate Justice condemns the withdrawal of UNFCCC COP19 badges of three members of youth organizations who were expressing their solidarity with the Filipino people suffering from the massive destruction brought about by Typhoon Yolanda.

The last few days, world attention was focused on the Philippines and the horrifying images of the impact of Typhoon Yolanda – the strongest typhoon to have made landfall in recorded history. The Opening Plenary of the international climate negotiations in Warsaw, Poland – where nearly all of the governments of the world were represented, all of the speeches and presentations included expressions of grave concern, sadness and sympathy over the plight of the people of the Philippines. The highlight of the session was an impassioned speech by lead Filipino negotiator Yeb Saño. The end of his speech was met with a standing ovation and by chants of “We stand with you” by members of civil society organizations.

As Yeb exited the Plenary Hall and made his way to speak at a TWN side event, around 60 members of youth groups including Young Friends of the Earth and Earth in Brackets, accompanied him as expression of solidarity. Several of the youth delegates started holding up signs with the names of Philippine towns and cities most badly hit by Typhoon Yolanda and unfurling a streamer on the number of victims of Pablo (Bopha) and Yolanda (Haiyan). It was at this point the UN security officers swooped, confiscated the banner and placards and detained three of the youth -- Maria Escalante and Graham Hallet of Earth in Brackets, and Clemence Hutin of Push Europe, all first-time observers to the UNFCCC proceses. Their badges were confiscated and were escorted off the UNFCCC conference venue. Later, it was reported that Cristiana Figueres, Executive Secretary of the UNFCCC, decreed that their badges will be permanently withdrawn throughout the duration of the Conference and for the next 5 years.

The expression of solidarity by young climate activists is very heartwarming. We are touched and comforted that they and many other fellow fighters for climate justice stand with us at this moment of great loss and suffering. It is unbelievable that they were treated in this manner by the leadership of the UNFCCC.

This was a mechanical and extreme application of what are to begin with already very restrictive and undemocratic rules on civil society engagement. As per UNFCCC rules -- this was no act of protest, there was no obstruction of UNFCCC processes nor spaces, there was no attack on any official, government or institution. If the issue is the holding up of signs without permission - does it not matter that the message and intent was to signify solidarity with the Philippines? This treatment was neither just nor logical and only shows a sheer lack of sensitivity, sympathy, much less solidarity with the Philippines.

We have witnessed with huge dismay, frustration and increasing outrage the failure of the international climate negotiations year after year to make progress on decisive measures to address climate change and its impacts. This latest incident only leads us to think those at the helm of the UNFCCC may not really have the interest of the most affected peoples at heart.

We urge the UNFCCC leadership to reverse its decision and re-grant accreditation to the Warsaw 3 -- justice for an act of solidarity.

Graham Hallett and Maria Escalante had some barbed words for Christiania Figueres, Executive Scretary of UNFCCC:

"Madam Executive Secretary, this was not a premeditated action, this was a procession with a Filipino man in mourning. Don’t you have something else to do? Perhaps governing a convention tasked with saving the planet by stopping anthropogenic climate change? You who begged the youth to get angry last year, are silencing civil society for following your words." said Graham Thurston Hallett and Maria Alejandra Escalante in their article. "We held a banner and we walked in solidarity, that is all. The Executive Secretariat of the UNFCCC and the developed countries seem to have been under the delusion that 3 minutes of silence amongst 20 years of inaction is enough."

Philippines Climate Commissioner and lead negotiator Yeb Saño, and now the G77, have written to the UNFCCC Secretariat to reconsider the re-badging of the activists.