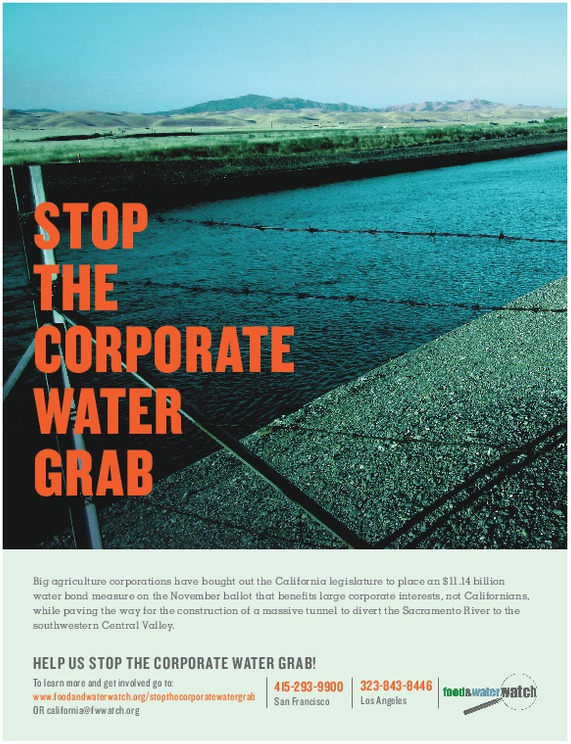 Privatize Everything in the Universe?

I wrote this song, "Privatize Everything," back in 2000. The song was meant as political satire, but unfortunately, many of these lyrics have already become reality in recent years, as evidenced by the federal "catch shares" program, the state's fake "marine protected areas," the Obama administration's tentative approval of Frankenfish and the state-federal Bay Delta Conservation Plan to build the twin tunnels.

Catch Shares - The oceans are being privatized under the Obama administration's "catch shares" program that concentrates ocean fisheries in fewer, increasingly corporate hands.

According to Food and Water Watch, "Catch shares are a system for managing our nation’s fisheries that are causing consolidation in the fishing industry at the expense of the livelihoods of thousands of smaller-scale, traditional fishermen and their communities. Such programs are being heavily touted as a means to promote sustainable fishing, but a closer look reveals they do not have a positive environmental record. Catch shares can incentivize the use of larger-scale boats, more damaging gear and wasteful fishing practices that hurt fish populations and the habitats on which they depend."

Fake Marine Protected Areas - Ocean conservation management has been privatized under the Marine Life Protection Act (MLPA) Initiative's creation of so-called marine protected areas in California that fail to protect the ocean from oil spills and drilling, pollution, military testing, corporate aquaculture, wind and wave energy project and all other uses of the ocean other than fishing and gathering.

Catherine Reheis-Boyd, the President of the Western States Petroleum Association, chaired the MLPA Blue Ribbon Task Force that imposed the so-called "marine protected areas" that went into effect in Southern California waters on January 1, 2012. The initiative was funded privately by the Resources Legacy Fund Foundation in an unaccountable and corrupt "public-private partnership" with the California Department of Fish and Wildlife.

Frankenfish Approval - Monsanto and Obama's Food and Drug Administration (FDA) are leading the charge to privatize the food supply and life itself by fast-tracking the approval of genetically engineered foods. The Food and Drug Administration is currently rushing the approval of genetically engineered salmon, "Frankenfish," for human consumption in spite of the tremendous risk these fish pose to imperiled salmon populations and public health.

Peripheral Tunnels Plan - The water in Central Valley rivers and the Sacramento-San Joaquin River Delta is being privatized though the Obama and Brown administration Bay Delta Conservation Plan (BDCP) to build the peripheral tunnels, designed to increase water exports to corporate agribusiness interests, including Beverly Hills billionaire Stewart Resnick and the Westlands Water District, developers and oil companies. Resnick and others are notorious for making millions in profits selling back subsidized water to the public in a water marketing scheme.

Habitat "restoration" and infrastructure "improvements" to greenwash this corporate water grab will be funded by the taxpayers through a water bond. In essence, public water agencies are using public water and money to enrich corporations in a dangerous alliance between big corporate interests and big government.

When you add the current campaign to privatize the prisons, public education, health services, military operations and public services in the U.S. and around the world, it is so clear that the Wall Street 1 percent and corporate leaders, in collaboration with corrupt government officials, are indeed well on their way to "privatizing everything."

To save the country and the planet, everybody who cares about democracy, human rights and the environment must resist and stop the insane plan to "privatize everything!"

Take Action: To resist the privatizers, help to stop the Corporate Water Grab in California by opposing the peripheral tunnels. The Bay Delta Conservation Plan is bad for four reasons:

(1) The construction of the $54.1 billion peripheral tunnels would sink California's budget.

(2) It will establish corporate control of water. Corporate agribusiness giants would get more taxpayer-subsidized water that they could resell to developers and oil companies for huge private profits.

(3) It is bad for the environment. It will lead to the extinction of Central Valley steelhead, Sacramento River chinook salmon, Delta smelt, longfin smelt, green sturgeon, Sacramento splittail, southern resident killer whales (that feed on salmon) and other imperiled species, as well as threaten the salmon and steelhead populations on the Trinity and Klamath rivers.

(4) It will raise water rates for Southern California water users. A groundbreaking economic analysis released on August 7, 2012 by Food & Water Watch and the California Water Impact Network (C-WIN) reveals that Los Angeles Department of Water and Power (LADWP) customers could be on the line for $2,003 to $9,182 per customer to pay for the 37-mile Peripheral Tunnels project. To download the report, go to: http://documents.foodandwaterwatch.org/doc/BayDeltaConveyanceLAEconAnalysis.pdf

Privatize Everything in the Universe (by Dan Bacher)