Add an Event
Newswire
Calendar
Features
Home
Donate
From the Open-Publishing Calendar
From the Open-Publishing Newswire
Indybay Feature
Publish to Newswire
Add an Event
Related Categories: Santa Cruz Indymedia | Arts + Action | Health, Housing & Public Services
Shrinking Sidewalks and the Permit Fantasy
by Robert Norse
Saturday Nov 9th, 2013 7:12 PM
With the suffocating reduction of sidewalk art and performance space under the modified Downtown Ordinances that went into effect in Santa Cruz on October 24th, repression apologists are reassuring those facing a matrix of exclusion that all the need to do, if they want to play, table, display, or occupy more than 12 square feet (approx 3 1/2 X 3 1/2 feet) is to apply for a permit at the Parks and Recreation Department. This is camouflage and cover for a fundamental change in the downtown scene being orchestrated by those engaged in class and culture war to gentrify Pacific Avenue and use the myth of Poverty Crime and Clutter to tramplel Santa Cruz values & traditions of diversity & inclusion. Described below is what is actually offered in the "permit process".
NOTES ON STREET PERFORMERS PERMITS
(These notes are based on the Parks & Recreation [P & R] office worker info on 11-7-13 as well as the City's Street Performance Downtown Santa Cruz website. If anyone has new info or corrections, please contact me).


PERMITS TO BE GRANTED IN ONLY 5 SPOTS DOWNTOWN
The only spots for which P & R will grant permits are
(1) Compass Rose area near the post office;
(2) Memorial Plaza near Jamba Juice;
(3) Pacific and Cooper;
(4) Pearl Alley;
(5) Scribner Statue area.

In other areas where performing for donation was traditional (say in front of New Leaf Market), it is simply banned with NO provision for any permit. This means from Laurel St. to Water St. there are a total of 4 spots to play with more than one performer, assuming the two aren't in a carnal embrace and playing harmonicas (i.e. have instruments like guitars that require at least some space).


ADVANCE NOTICE COULD BE REQUIRED DAYS IN ADVANCE
Permits can be filed only Monday – Thursday 8 AM – 4 PM at the P & R Office at 323 Church St 36 hours in advance of performance. So, if you want to perform with a fellow guitarist on a Monday, you'd better have applied on Wednesday or Thursday of the prior week. P & R worker Betsy assured me that two people playing could easily fit into 12 square feet—the maximum allowable space without a permit for someone with an open guitar case, cup, or other “display device”.. She must have been quite the rage at college phone booth stuffing events.


REPRESSIVE TIME LIMITATIONS
Maximum time length allowed is 2 hours on Pacific and 3 hours in the alleys, one performance per day, and only between 11 AM- 10 PM. Additionally it's not clear when these rules will be altered given the new ordinances (and new bleak mentality to enable performance “regulation” by police, hosts, security guards, city staff, & merchants). Only one event per weekend. And only in the five spots indicated. Otherwise you are expected to squeeze your instrument, effects, companions and hynee's into 3 of those sidewalk squares.

When Betsy checked, no one had applied for (and been granted) a permit subsequent to October 24, though 2 groups had applied for events in November before that date and been granted permits. Actually though I've only heard second hand accounts of smoking tickets being issued and none of sitting or "display device in wrong place" or "taking up too much space" citations, the number of performers down there has looked tome to be markedly less and those who are there are newbies who often don't know the rules. Today I saw two homeless people sprawled in "illegal" spots (but not blocking traffic, of course, just "illegal under the "merchant freeway" rules) and, I think, one performer--this was around 4 PM.

Though the permits are free, if you're using a keyboard or any kind of “amplification” however minor, you've got to go through the SCPD and pay $33 with a much longer lead time. I've filed a Public Records Act request asking for specifics from them—which they're supposed to respond to in the next 10 days.
I've also requested a list of the names and positions of the Hosts (the Hostile-aptaility squad) and the First Alarm thug patrols--no response yet.


PRICE TAGS ON YOUR OWN ARTWORK AND MUSIC IS CONSTITUTIONALLY PROTECTED (BUT CONVENIENTLY OMITTED IN THE CITY'S LITERATURE)
Contrary to what rule#7 at reads at the Street Performance Downtown Santa Cruz city website http://www.cityofsantacruz.com/index.aspx?page=1289 (“no commercial sales”), recent court decisions acknowledged by the City Attorney's office allow you to both sell and price tag your own original work (if written, audio, or video)--though this is not explicitly acknowledged (and not respected by some police).

The published decision is Steven C. White v. City of Sparks. It can be found at http://caselaw.findlaw.com/us-9th-circuit/1300114.html . There's a news story at http://www.firstamendmentcenter.org/no-license-needed-to-sell-art-in-parks-of-sparks-nev

The City's Street Performer website has also not been updated to indicate that a permit is required for any space more than 2' X 6' (not 4' X 6' as it now reads).

What you don't read in the latest cheery Street Performing Downtown Santa Cruz hand-out being passed on by police and hosts (from their unmarked HQ at 607 Front St.) is the alarming (and absurd) clarification that the 12 square feet is only 3 “sidewalk squares”--difficult for one performer with an instrument and its case, impossible for more than one.


POSSIBLE ESCAPE HATCH?
MC 5.43.010 only limits "a display device for noncommercial use ON ANY PUBLIC SIDEWALK" [emphasis mine]-- so if the device itself doesn't sit on the sidewalk, but on you, it arguably isn't covered by the ordinance. So one alternative for performers is to attach a cup to your clothing and have no display device at all. Perhaps add a small sign “City law forbids me to place this cup on the sidewalk.”

This has the additional benefit of arguably allowing you if you perform while standing to do it anywhere and everywhere and still get donations from those brave enough to approach. The 14' setbacks only apply to sitting, display devices placement, (and panhandling—which is explicitly defined differently than performing for donation).


I include below copies of the Permit Application, the Permit "Rules" from the City website, the Santa Cruz Performers Guidelines flyer being pushed by the Hosts and cops, and a flier that outlines the information I've outlined above. 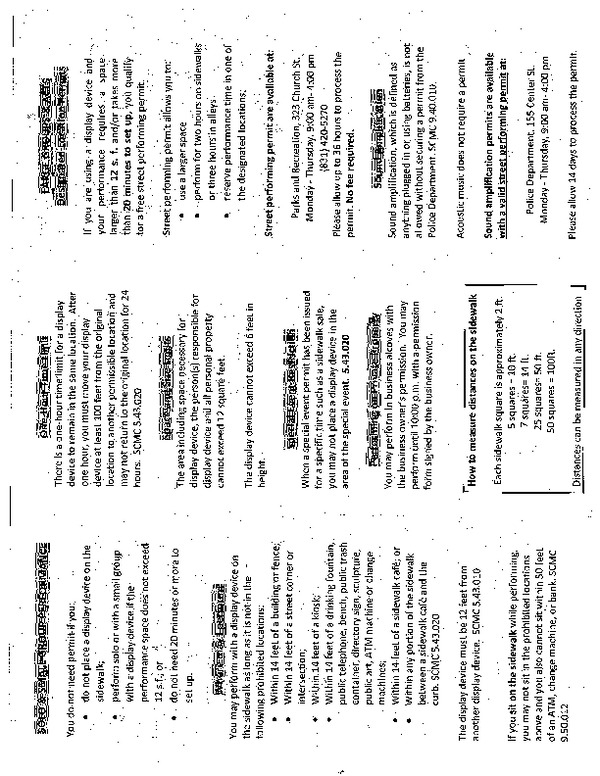 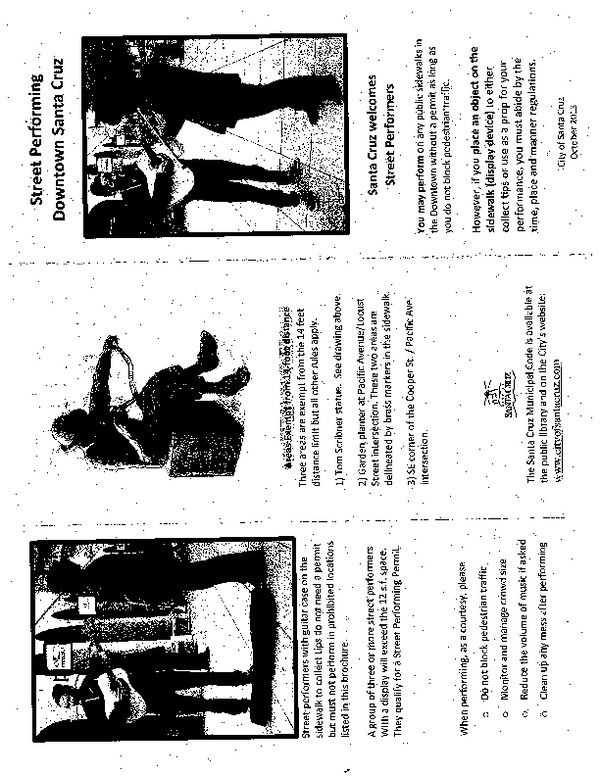 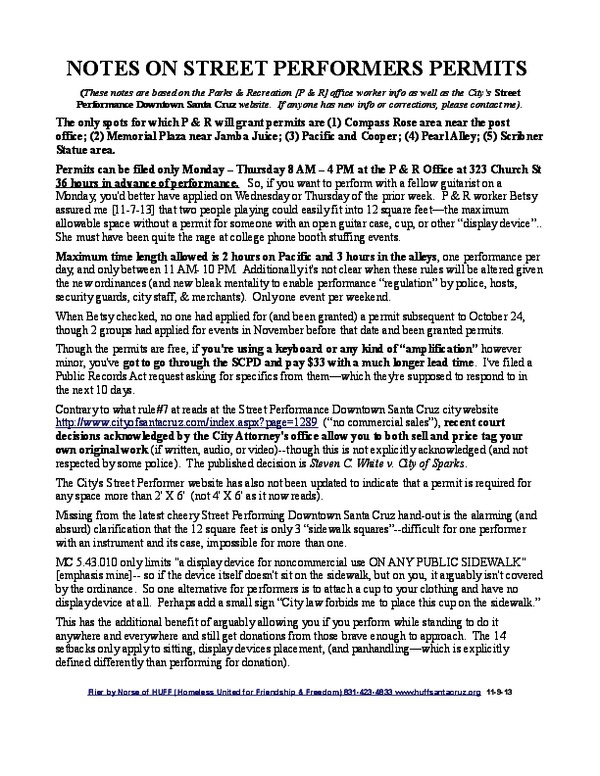 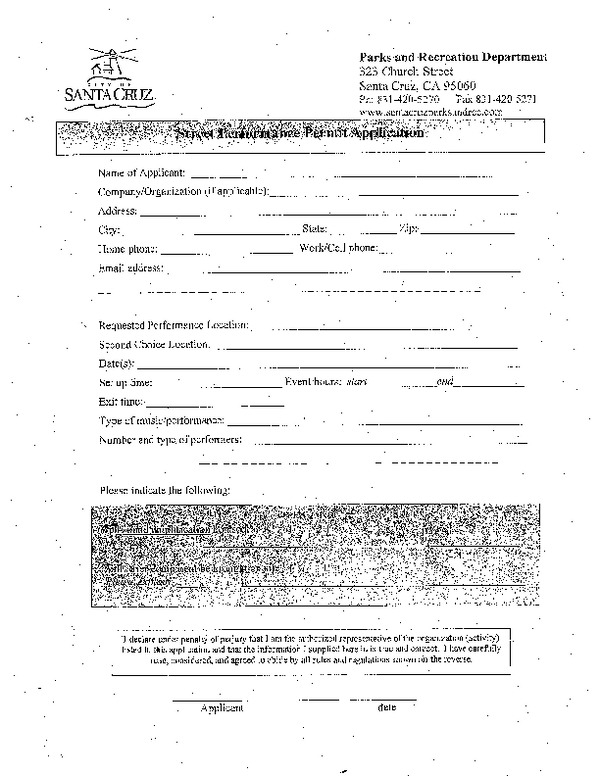 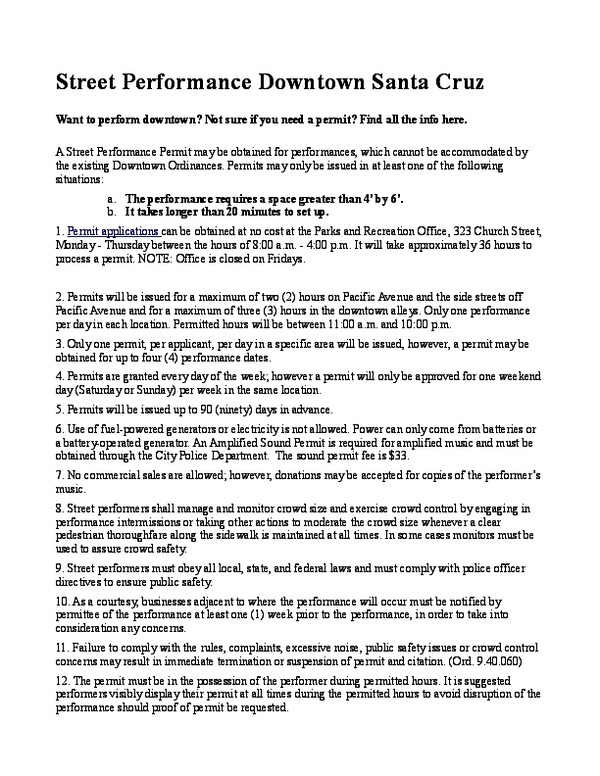 Download PDF (59.2KB)
The site at http://www.cityofsantacruz.com/index.aspx?page=1289 has not been updated. So the sentence "The performance requires a space greater than 4 X 6 feet" has now been amended to read "greater than 2 X 6" or more accurately, 12 square feet.
Add Your Comments
LATEST COMMENTS ABOUT THIS ARTICLE
Listed below are the latest comments about this post.
These comments are submitted anonymously by website visitors.