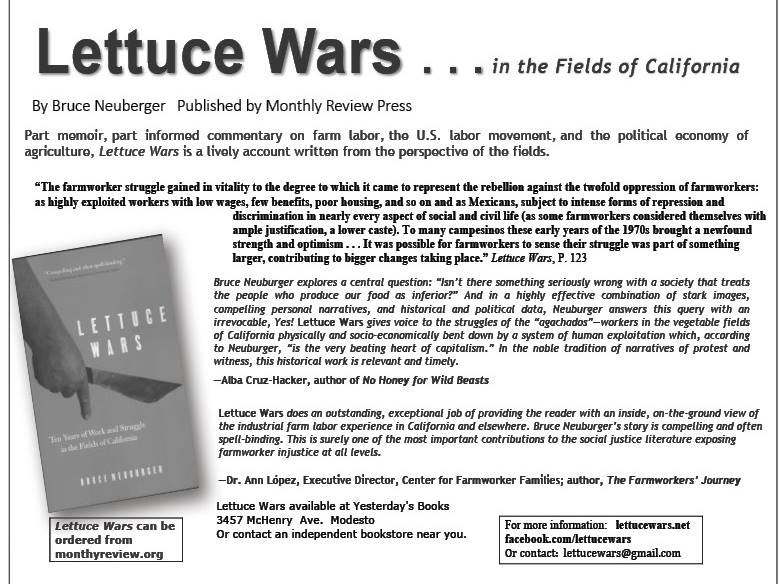 Political activist and former farm worker Bruce Neuburger will be speaking at the UCSC Common Ground Center on November 12 about social justice in the California food system. Neuburger is the author of Lettuce Wars: Ten Years of Work and Struggle in the Fields of California, a memoir about his experiences as a farm worker in California and a commentary on the political economy of agriculture, the U.S. labor movement, and farm labor. Bruce will be joined by Dr. Ann Lopez founder and director of Center for Farmworker Families and author of The Farmworkers’ Journey.

Bruce Neuburger became a farm worker in 1971, right around the time that the United Farmworkers Union was created. In the following years, workers became more organized and vocal in their work for better wages and working conditions. Neuburger participated in the organizing, boycotts, and strikes along with other farmworkers, many of who were immigrants.

Lettuce Wars is part memoir and part history, an effort to bring to life some of the workers and activists with whom he shared those years, as well as to place that struggle in the broader social and political context in which it emerged and unfolded. Neuburger describes what it was like to work in the fields in harsh conditions and he portrays the people he encountered—immigrant workers, fellow radicals, company bosses, cops and goons—vividly and indelibly, lending a human aspect to the conflict between capital and labor as it played out in the fields of California. It aims to reveal the mainsprings of a movement whose influence is still present today, 40 years later, and some of what is going on in the fields today and what that might tell us about the limits of reform.

Ann Lopez, in addition to her important book, leads the Center for Farmworker families which works with farmworkers both in the Watsonville area and in Mexico. The Center among other things brings together people outside the fields through social reality tours with farmworkers in a program that has become increasingly popular. Dr. Lopez has a deep grasp of the economic and social conditions of farmworkers and a searing analysis of the way in which NAFTA has devastated Mexico’s small farmers leaving them with no options but to seek survival north of the border.

The event is sponsored by UCSC's Common Ground Center at Kresge College. The mission of the Common Ground Center is to “create cultural change for social justice, environmental regeneration and economic viability”. The Center hosts a series of public lectures and workshops based on this mission, as well as undergraduate courses, two themed residence halls, and a range of student-led activities. A list of subsequent talks, and more information, can be found at kresge.ucsc.edu/commonground.

Students from the UCSC “Cultivating a Daily Revolution” seminar, organized by the Friends of the Community Agroecology Network (FoCAN), will join the night as part of their course. Their seminar focuses on the injustices existing in industrial food practices, and what the efforts are to alleviate these issues in the Santa Cruz community.

“Lettuce Wars: Social justice in the California food system, with Bruce Neuburger and Dr. Ann Lopez” is Tuesday, November 12, 2013, from 7 – 9 PM, in the UCSC Kresge Seminar Room. It is free and open to the public.

Parking is $3 in the Core West Parking Garage. More parking information is online at kresge.ucsc.edu/commonground/about/parking.html
END_OF_DOCUMENT_TOKEN_TO_BE_REPLACED
Added to the calendar on Sat, Nov 9, 2013 2:19PM
Related Categories: Santa Cruz Indymedia | Labor & Workers
Add Your Comments
Support Independent Media
We are 100% volunteer and depend on your participation to sustain our efforts!