Add an Event
Newswire
Calendar
Features
Home
Donate
From the Open-Publishing Calendar
From the Open-Publishing Newswire
Indybay Feature
Publish to Newswire
Add an Event
Related Categories: California | Central Valley | North Coast | Environment & Forest Defense | Government & Elections
Big Oil treated legislators to $13,000 dinner before fracking bill vote
by Dan Bacher
Thursday Nov 7th, 2013 8:45 PM
There's no doubt that the Western States Petroleum Association, Chevron and other oil companies use every avenue they can to dominate environmental policy in California, including lobbying legislators, contributing heavily to election campaigns, serving on state regulatory panels, and wining and dining politicians. Until we get the big corporate money out of politics, California will continue to be awash in a sea of oil money. 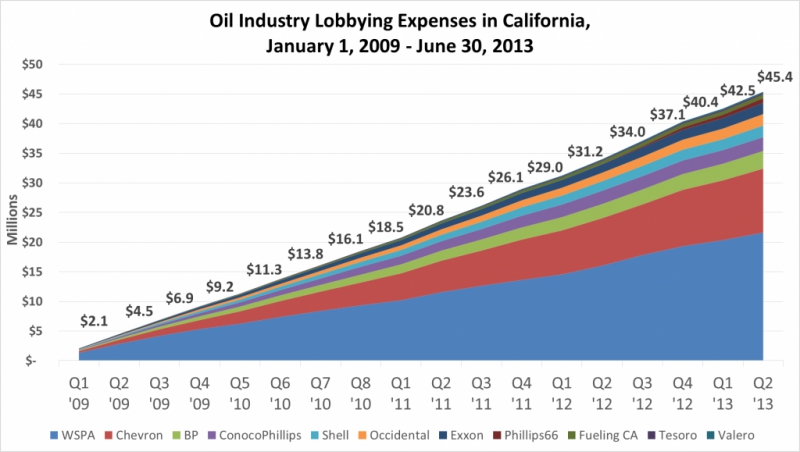 The oil industry, the largest and most powerful corporate lobby in Sacramento, dumped millions of dollars into its successful lobbying efforts to eviscerate an already weak fracking bill, Senator Fran Pavley’s Senate Bill 4, at the end of the Legislative Session.

Chevron, the Western States Petroleum Association and Aera Energy LLC spent the most money lobbying legislators in the third quarter of 2013, according to California Secretary of State documents.

In a classic example of the “pay to play” and “wine and dine” corruption that infests California politics, nearly $13,000 of the Western States Petroleum Association's third quarter spending went toward hosting a dinner for 12 lawmakers and two staff members in September.

According to Lauren Rosenhall of the Sacramento Bee, the dinner took place at "one of Sacramento's poshest venues: The Kitchen, known for its interactive dining experience where guests sit in the kitchen as cooks share details of the five-course meal. Moderate Democrats seemed to be the target audience for the treat: Assembly members Adam Gray, Henry Perea and Cheryl Brown attended, as did Sens. Norma Torres, Ron Calderon and Lou Correa." (http://blogs.sacbee.com/capitolalertlatest/2013/11/oil-industry-treated-legislators-to-13k-dinner-as-fracking-bill-loomed.html)

The dinner was held on September 4, as Senate Bill 4 was awaiting a vote on the Assembly floor. The oil industry the next day added amendments that further weakened the already weak legislation opposed by a broad coalition of over 100 conservation, environmental justice and consumer groups, including Food and Water Watch, the Center for Biological Diversity, the Credo Campaign and California Water Impact Network (C-WIN).

These amendments including the following:

• Language added to the bill specifies that “no additional review or mitigation shall be required” if the supervisor of the Division of Oil, Gas and Geothermal Resources “determines” that the proposed fracking activities have met the requirements of the California Environmental Quality Act. (http://www.sandiegolovesgreen.com/activists-urge-senator-pavley-to-withdraw- dangerous-fracking-bill/)

“This provision could be used by DOGGR to bypass CEQA’s bedrock environmental review and mitigation requirements,” according to a statement from the anti-fracking groups. “This language could also prevent air and water boards, local land use jurisdictions and other agencies from carrying out their own CEQA reviews of fracking.”

• In addition, under existing law, the governor and DOGGR can deny approvals for wells that involve fracking or place a partial or complete moratorium on fracking. The new language states that DOGGR “shall allow” fracking to take place until regulations are finalized in 2015, provided that certain conditions are met.

"This could be interpreted to require every fracked well to be approved between now and 2015, with environmental review conducted only after the fact, and could be used to block the Governor or DOGGR from issuing a moratorium on fracking prior to 2015," the groups stated.

At the last minute, the League of Conservation Voters, NRDC and two other Senate Bill 4 backers withdrew their support for the legislation. However, the bill, having been given “green cover” by these NGOs, passed through the Legislature a week after the dinner.

Governor Jerry Brown, a strong supporter of the expansion of fracking in California, then signed the legislation on September 20.

“For Perea, Correa, Calderon and Torres, the September dinner was not the first time they'd been treated to The Kitchen by the oil industry. They were among 11 legislators who attended a Western States Petroleum Association dinner there last year, valued at nearly $11,000,” Rosenthall noted.

Prior to the latest Secretary of State filing, a report released by the American Lung Association revealed that the oil industry lobby, the biggest corporate lobby in California, has spent $45.4 million in the state since 2009. The Western States Petroleum Association (WSPA) alone has spent over $20 million since 2009. (http://blog.center4tobaccopolicy.org/oil-lobbying-in-california)

Oil and gas companies spend more than $100 million a year to buy access to lawmakers in Washington and Sacramento, according to Stop Fooling California, an online and social media public education and awareness campaign that highlights oil companies’ efforts to mislead and confuse Californians.

In addition, Robert Gammon, East Bay Express reporter, revealed that before Governor Jerry Brown signed Senator Fran Pavley's Senate Bill 4, Brown accepted at least $2.49 million in financial donations over the past several years from oil and natural gas interests, according to public records on file with the Secretary of State's Office and the California Fair Political Practices Commission. (http://www.eastbayexpress.com/oakland/fracking-jerry-brown/Content?oid=3726533)

The oil industry not only exerts influence by direct contributions to political campaigns, but by getting its lobbyists and representatives on key panels like the Marine Life Protection Act (MLPA) Blue Ribbon Task Force. (http://www.elkgrovenews.net/2013/10/oil-lobby-has-spent-over-45-million-in.html, http://topics.sacbee.com/Marine+Protected+Areas/)

In one of biggest environmental scandals of the past decade, Reheis-Boyd served as chair of the MLPA Initiative Blue Ribbon Task Force to create alleged "marine protected areas" in Southern California. She also served on the North Coast, North Central Coast and Central Coast task forces from 2004 to 2011, from the beginning of the process to the end of the process. (http://www.dfg.ca.gov/marine/mpa/brtf_bios_sc.asp)

The MLPA Initiative process overseen by Reheis-Boyd and other ocean industrialists created fake "marine protected areas" that fail to protect the ocean from fracking, oil drilling, pollution, wind and wave energy projects and all human impacts on the ocean other than fishing and gathering.

State officials and representatives of corporate "environmental" NGOs embraced and greenwashed the "leadership" of Reheis-Boyd and other corporate operatives who served on the MLPA Blue Ribbon Task Forces to create “marine protected areas” that fail to actually protect the ocean. By backing her leadership as a "marine guardian," they helped to increase the already powerful influence of the Western States Petroleum Association and the oil industry.

The California Coastal Commission and other state officials acted "surprised" when FOIA documents and an Associated Press investigation revealed that Southern California coastal waters have been fracked repeatedly, over 200 times according to the latest data. Yet independent investigative reporters like David Gurney and myself warned, again and again, that this would happen when an oil industry lobbyist was in charge of marine "protection."

There's no doubt that the Western States Petroleum Association, Chevron and other oil companies use every avenue they can to dominate environmental policy in California, including lobbying legislators, contributing heavily to election campaigns, serving on state regulatory panels, and wining and dining politicians. Until we get the big corporate money out of politics, California will continue to be awash in a sea of oil money.

For an depth look at the state of fracking in California, read Glen Martin's article, "All Fracked Up," in California Lawyer Magazine: http://www.callawyer.com/clstory.cfm?eid=931856&wteid=931856_All_Fracked_Up

§This is not a new Policy of the U.S. Oil Monopolies.
by Gage
Friday Nov 8th, 2013 5:19 PM
During the civil war in Spain, the democratically elected government went to buy Oil Supplies from the U.S. Oil monopolies, but they would not give any supplies to the democratic side even though they would have been paid in cash.

What the U.s. Oil monopolies did instead was to give total credit for all its products for the full duration of the fascist falange party aggressive war. Big U.s. Oil funded the destruction of democracy in Spain.

They are busy nowadays doing the same thing in that they subvert all the peoples democracy which is organizing to end pollution of the environment by fossil fuel dependence.

This latest funding of those who vote for fracking is continuous practice, and bodes no good for the future. We need to support the move towards the renewables such as wind, tidal, and solar power to break the monopolies chains against a livable ecological organic web-of-life of the planet.

End pollution wars, not endless wars for more and more pollution. You yet have a world to win!!
Add a Comment
Support Independent Media
We are 100% volunteer and depend on your participation to sustain our efforts!