Brown fails to show for environmental award under pressure from protest

by Dan Bacher
“Governor Brown is moving ahead with a policy that grabs land, clear-cuts forests, destroys biodiversity, abuses Mother Earth, pimps Father Sky and threatens the cultural survival of Indigenous Peoples,” said Tom Goldtooth. “The policy privatizes the air we breath. Commodifies the clouds. Buys and sells the atmosphere. Corrupts the sacred.” 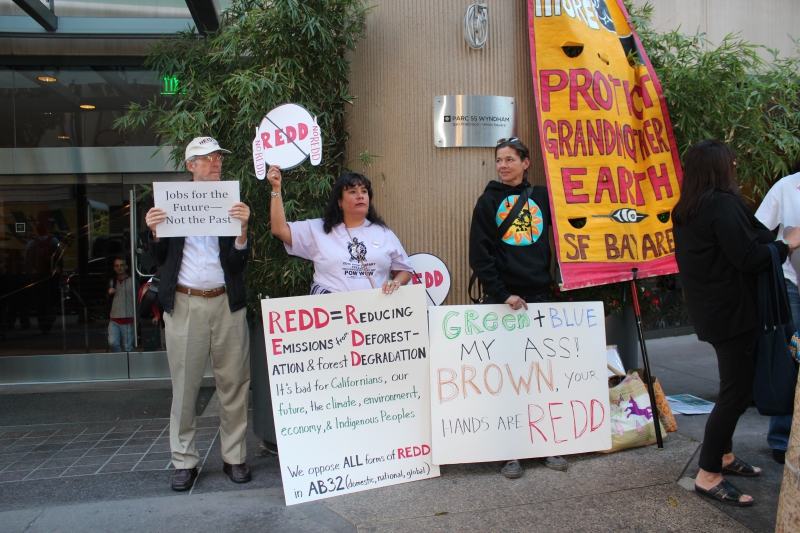 Over 60 people, including indigenous leaders, environmentalists and labor activists, gathered at the Le Parc Hotel in San Francisco on Thursday, October 17 from 5:30 to 7 pm to protest the Blue Green Alliance’s honoring of Governor Jerry Brown with its “Right Stuff” Award.

Faced with the protest condemning his anti-environmental policies, Brown apparently decided to back out from receiving the award. In particular, the protest focused on Brown’s support for fracking, a massive twin tunnels project and his emissions trading scheme.

The protest was organized by a group of individuals unaffiliated with national environmental organizations who were galvanized by Brown’s most recent assault on the environment: the green lighting of fracking in California.

“Jerry Brown ignored the majority of Californians and the rank and file of the Democratic Party who support a moratorium on fracking,” said organizer Damien Luzzo. “He signaled that he would not sign any of the moratorium bills and only signed the already weak SB4, after he gutted it at the 11th hour at the behest of Big Oil.”

According to organizer Lauren Steiner, “When I worked on Jerry Brown’s presidential campaign in 1992, he was an uncompromised environmentalist. Now he will support any industry, including polluting ones, if he thinks it can bring jobs and tax revenues. In 1992, the old Jerry Brown limited his campaign contributions to under $100, so he wouldn’t be beholden to special interests. The new Jerry Brown has accepted $2.5 million over the past few years from the oil and gas industry.”

At the rally, Steve Ongerth, one of the three co-founders of the IWW Environmental Caucus, talked about how some Earth First!ers founded what became the BGA in 1998 and how far the group has strayed from its original goals. His article is available at: http://www.counterpunch.org/2013/10/17/jerry-brown-the-wrong-stuff/

“The Blue Green Alliance, while well meaning, has made far too many compromises to corporations,” said Ongerth in CounterPunch. “I support renewable energy, but it must be produced sustainably and deployed in harmony with the environment. Workers who manufacture, install and maintain the equipment must work under good and safe working conditions. Giving Jerry Brown an award is proof the Blue Green Alliance has lost its way.”

“It is ludicrous for Blue Green Alliance to give the Governor an award. Attacks on the environment or workers will not save our planet,” said Ongerth.

Michael Preston, from the Winnemem Wintu Tribe, spoke out against the Bay Delta Conservation Plan to build the peripheral tunnels and Shasta dam raise that will cause massive fish extinction and destroy the Delta in order to divert water to corporate agribusiness, oil companies and Southern California water agencies.

“I am here as a Winnemem Wintu Tribe warrior to speak for the salmon and for our cultural beliefs and sacred sites,” said Preston. "We have to speak out against the peripheral tunnel and Shasta dam raises because they could make the fish extinct and destroy the whole Bay Delta Estuary. These plans will affect all of life more than we know.”

“Governor Brown is moving ahead with a policy that grabs land, clear-cuts forests, destroys biodiversity, abuses Mother Earth, pimps Father Sky and threatens the cultural survival of Indigenous Peoples,” said Goldtooth. “The policy privatizes the air we breath. Commodifies the clouds. Buys and sells the atmosphere. Corrupts the sacred.”

Pamela Zuppo, from the San Francisco chapter of 350.org, spoke on Brown’s support of fracking, including his signing of Senate Bill 4, the green light to fracking bill.

At the end of the program, Penny Opal Plant of Gathering Tribes read a list of groups and individuals who should have received an environmental award this year instead of Jerry Brown.

These include:
• Holly Mitchell, who introduced a strong fracking moratorium bill in the state legislature and LA City Council members Paul Koretz and Mike Bonin, who recently introduced a fracking moratorium motion in Los Angeles;
• Mark Jacobson, from Stanford University, who has developed a plan to power California with 100% renewables by 2030;
• The Center for Biological Diversity and Earthjustice, whose lawsuit halted fracking in public lands in California;
• Truthout, the on-line publication whose investigative reporting uncovered fracking off the California coast;
• The Coalition to Decommission San Onofre, whose tireless work led to the shutdown of this dangerous nuclear power plant;
• State Senator Lois Wolk, a tireless opponent of the Bay Delta Conservation Plan, whose recently signed bill SB43 allows customers to get more than 20% of their power from renewables;
• The Klamath Justice Coalition, a coalition of members of Indian Tribes and activists who have helped stop fish kills and fought for dam removal on the Klamath River;
• The California Sportfishing Protection Alliance, which has filed hundreds of successful lawsuits and complaints compelling industry, agribusiness, cities, counties and water boards to comply with the Clean Water Act; and
• Richmond Mayor Gayle McLaughlin, who has waived residential solar permit fees, initiated a solar thermal rebate policy and a green jobs training program, sponsored Green Building and Compostable Food Ware ordinances and helped negotiate a $114 million settlement with Chevron.

One highlight of the protest was a group of flash-mobbers who sang and danced to Toxic. Anti-war mom Cindy Sheehan, who is running for Governor on the Peace and Freedom Party ticket, also showed up at the protest with a group of her supporters.

As attendees of the dinner were arriving, protesters also handed out an alternative program for the event featuring the 10 worst environmental policies of Governor Brown. These include: the twin tunnel plan; plans to weaken the California Environmental Water Quality Act (CEQA); record water exports out of the Delta; record Delta fish kills; the signing of Senate Bill 4; clear cutting in the Sierra Nevada; pro-oil industry appointments to the Department of Conservation; the support of "theme park" wetlands; the failure to abide by the fish doubling provisions of the Central Valley Project Improvement Act (CVPIA) and support of REDD (Reducing Emissions from Deforestation and Forest Degradation).

The program also included the list of groups and individuals who should have received an environmental award this year instead of Jerry Brown.

§No To REDD
by Dan Bacher 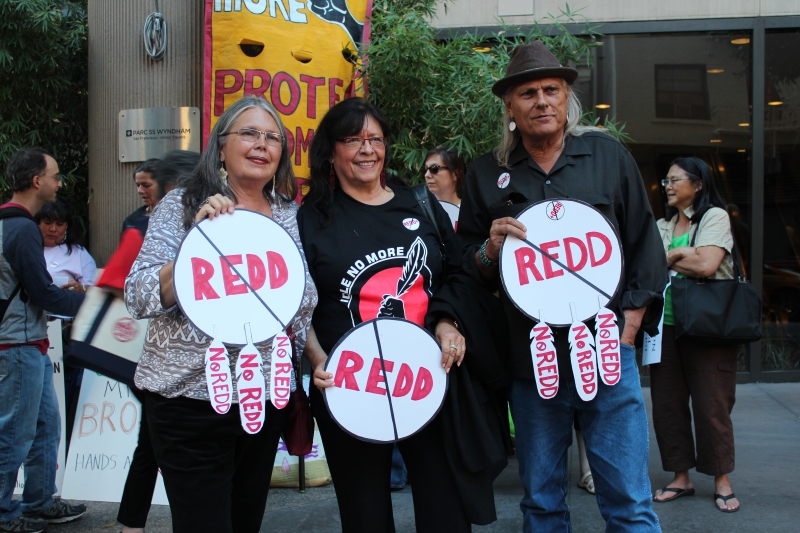 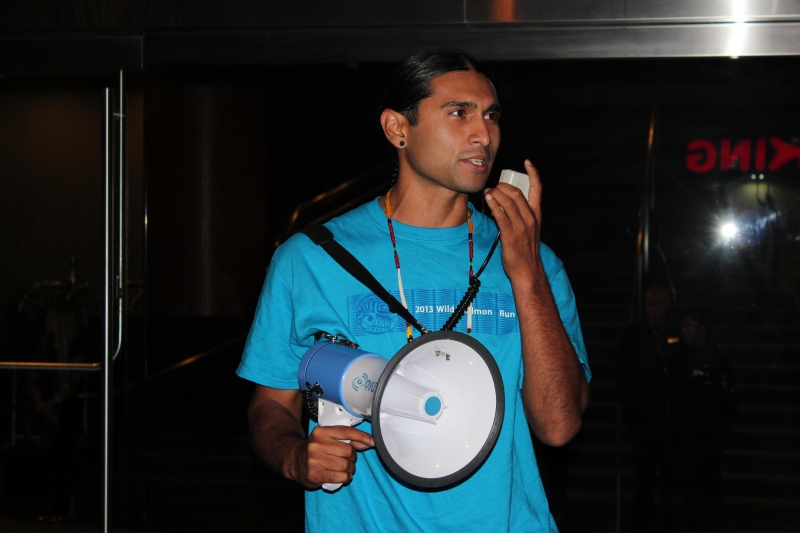 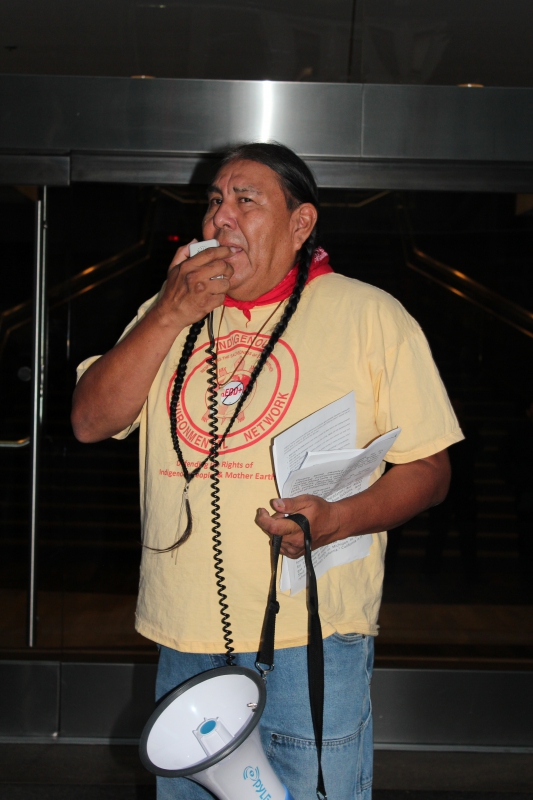 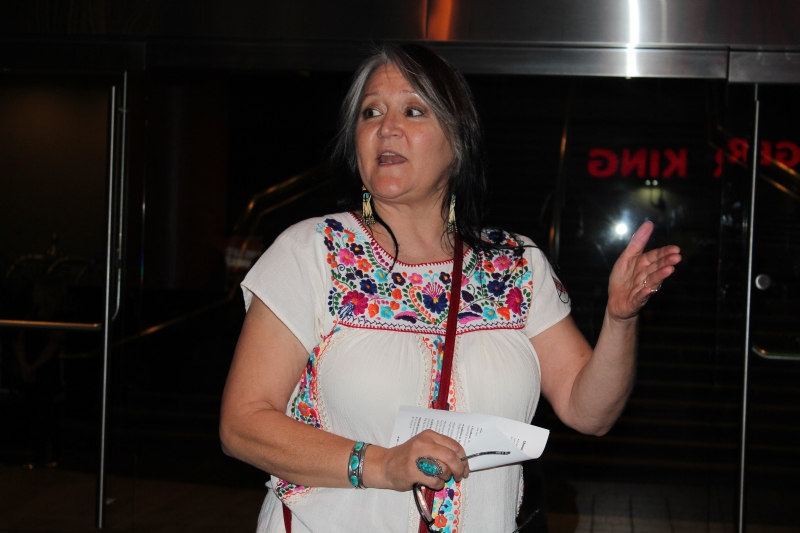 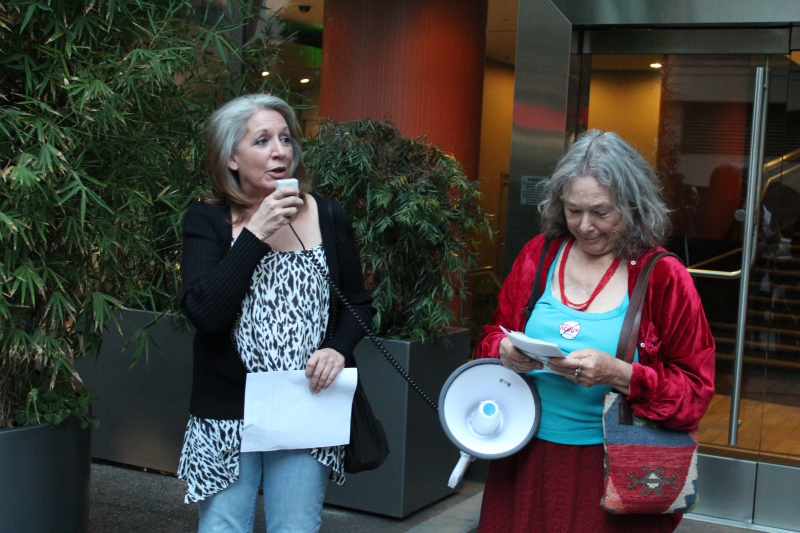 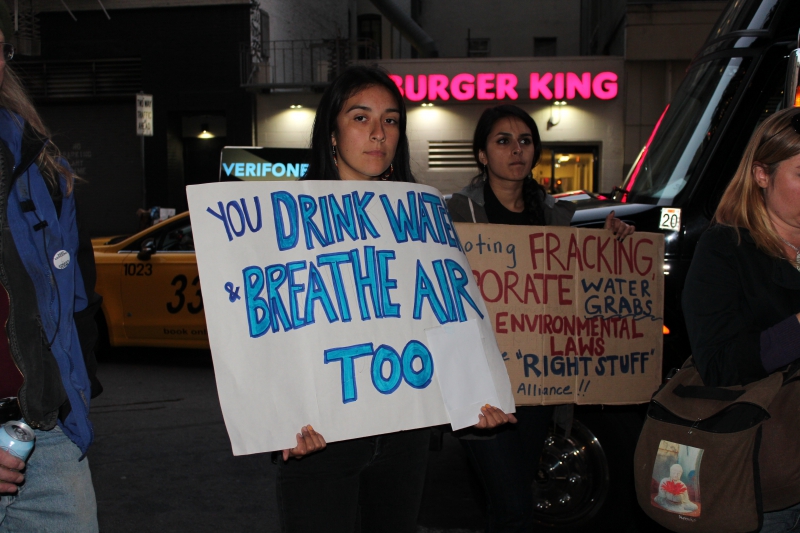 original image (5184x3456)
April reminds Jerry Brown, who failed to show up to receive his award, that he drinks water and breathes air too.
Add Your Comments
Latest Comments
Listed below are the latest comments about this post.
These comments are submitted anonymously by website visitors.
TITLE
AUTHOR
DATE
Text of my speech
Steve Ongerth
Support Independent Media
We are 100% volunteer and depend on your participation to sustain our efforts!