Tribute to Herman Wallace in US Congressional Record

by Transcribed and reprinted by Angola 3 News
Herman Wallace's sister, Victory Wallace, recently was sent this letter and copy of the Angola 3 entry in the Congressional Record from Congressman John Conyers, Robert C. Scott, and Cedric L. Richmond. Featured are scans of the letter and entry, as well as a transcription of those documents. "Because of Mr. Wallace's work, those of us in Congress who have called for his freedom will dedicate our future efforts to ensuring that no one anywhere in the United States is subjected to the unjust and inhumane treatment that he has endured," said Conyers. 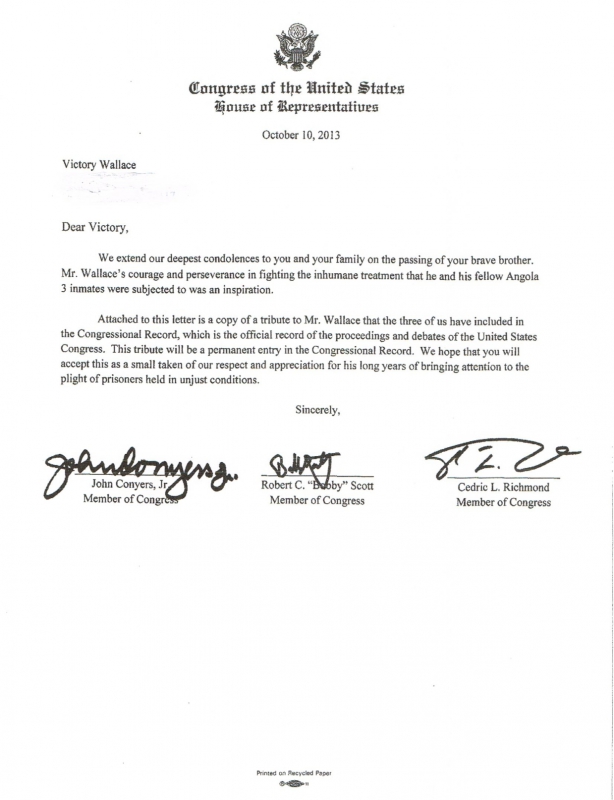 We extend our deepest condolences to you and your family on the passing of your brave brother.

Mr. Wallace’s courage and perseverance in fighting the inhumane treatment that he and his Angola 3 inmates were subjected to was an inspiration.

Attached to this letter is a copy of a tribute to Mr. Wallace that the three of us have included in the Congressional Record, which is the official record of the proceedings and debates of the United States Congress. This tribute will be a permanent entry in the Congressional Record, We hope that you will accept this as a small token of our respect and appreciation for his long years of bringing attention to the plight of prisoners held in unjust conditions.

PROCEEDINGS AND DEBATES OF THE 113th CONGRESS, FIRST SESSION

SPEECH OF HON. JOHN CONYERS, JR. OF MICHIGAN IN THE HOUSE OF REPRESENTATIVES

Mr. CONYERS. Mr. Speaker, we rise to commemorate and celebrate the life and contributions of Herman Wallace, one of the bravest champions for justice and human rights whom we have ever met. Nìcknamed “The Muhammad Ali of Justice,” Mr. Wallace was a member of Louisiana's “Angola 3” who spent 4l years in solitary confinement. Mr. Richmond and I had the opportunity to visit Mr. Wallace at the Louisiana State Penitentiary in Angola, justifiably called “the Alcatraz of the South” several years ago. I was impressed by his courage, determination, and dignity. We received word that Mr. Wallace passed away earlier this morning, only three days after he was freed pursuant to a federal judge's ruling that he had not received a fair trìai in 1974.

Mr. Wallace began his struggle for justice back in the 1970s, when he, along with Robert King and Albert Woodfox, organized a prison chapter of the Black Panther Party at the Angola prison. He worked to desegregate the prison, to end systematic rape and violence, and for better living conditions for the inmates.

Mr. Albert Woodfox, and Robert King spent decades in solitary confinement--confined in cells no bigger than a parking space for 23 hours a day--for murders they say they did not commit. No physical evidence links them to these crimes. Potentially exculpatory DNA evidence has been lost, and the testimony of the main eyewitness has been discredited.

Mr. Wallace showed relentless courage and perseverance in fighting the injustice and inhumane treatment that he and his fellow Angola 3 inmates were subjected to. Even from the confines of solitary confinement, he filed lawsuit after lawsuit in an effort to bring attention to the conditions under which he and the others were being held.

On behalf of all who believe in fundamental fairness and justice, we commend Mr. Wallace's courage and determination to keep fighting through 41 long years of solitary confinement. He is an inspiration to all of us.

Mr. Wallace had recently been diagnosed with terminal liver cancer. With his release from prison, it was hoped that he would be able to receive the medical care that his advanced liver cancer required. Prior to his passing, Mr. Wallace’s legal team said, however, that his greatest hope was that his case would help ensure that others, especially his fellow Angola 3 member Albert Woodfox, would not continue to suffer the cruel and unusual confinement that he had suffered. Because of Mr. Wallace's work, those of us in Congress who have called for his freedom will dedicate our future efforts to ensuring that no one anywhere in the United States is subjected to the unjust and inhumane treatment that he has endured.

Mr. Speaker, it was with great sadness that we learned of Mr. Wallace's passing earlier this morning, nine days shy of his 72nd bìrthday. Mr. Wallace's personal fight against injustice and the inhuman plight that is long term solitary confinement has ended for him. The larger fight against that injustice must go on, however, and his legacy will endure through a civil lawsuit that he filed jointly with his fellow Angola 3 members, Albert Woodfox and Robert King. That lawsuit seeks to define and abolish long term solitary confinement as cruel and unusual punishment.

Mr. Speaker, we ask my colleagues to join me in honoring Mr. Wallace for his many-decades-long fight for the humane treatment of prisoners. We, and all of us, owe Mr. Wallace a debt of gratitude.
END_OF_DOCUMENT_TOKEN_TO_BE_REPLACED
§Entry in Congressional Record
by Transcribed and reprinted by Angola 3 News 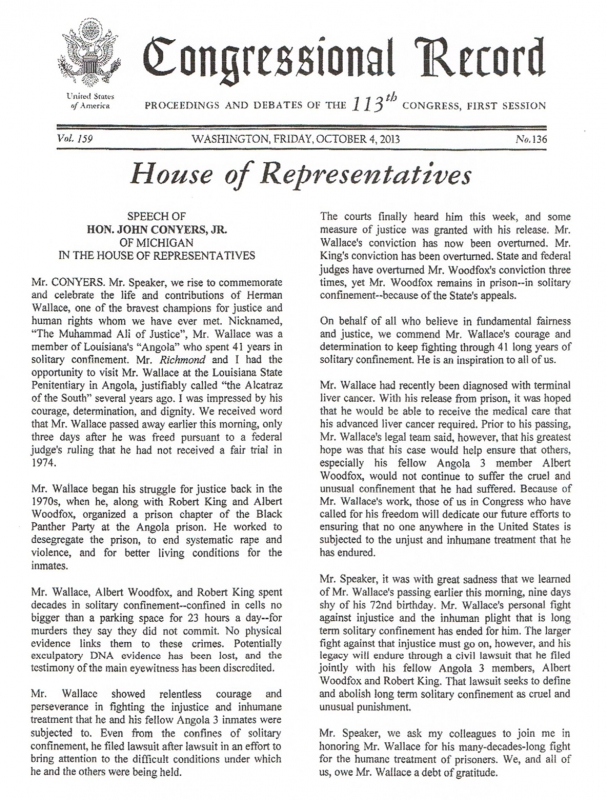 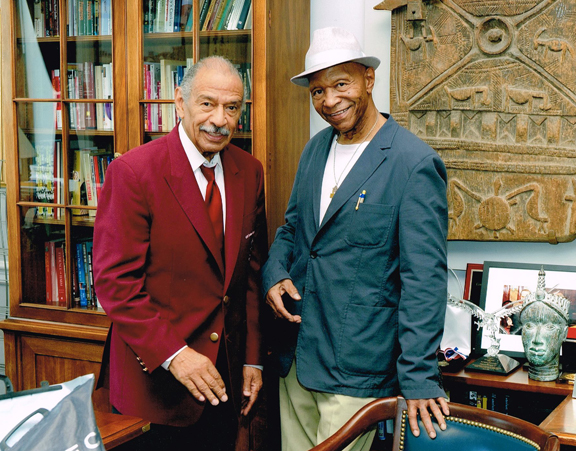 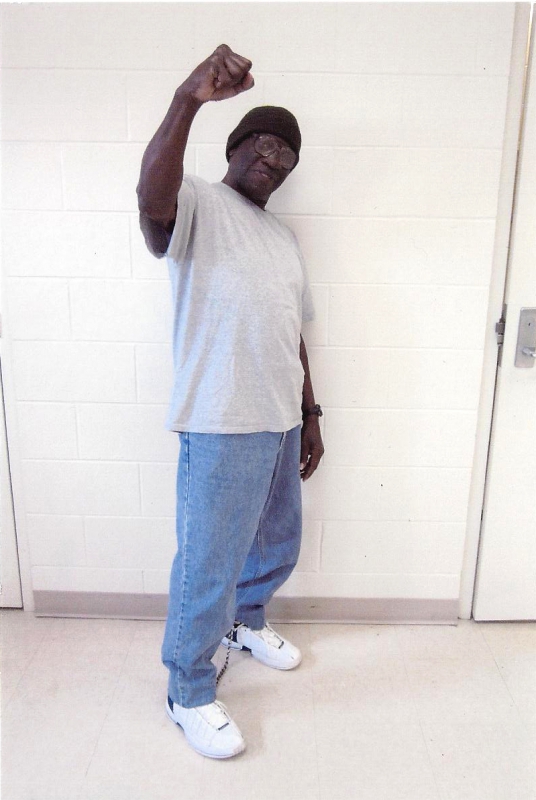 original image (799x1192)
All Power to the People!
END_OF_DOCUMENT_TOKEN_TO_BE_REPLACED
§Herman honored in North Carolina
by Transcribed and reprinted by Angola 3 News 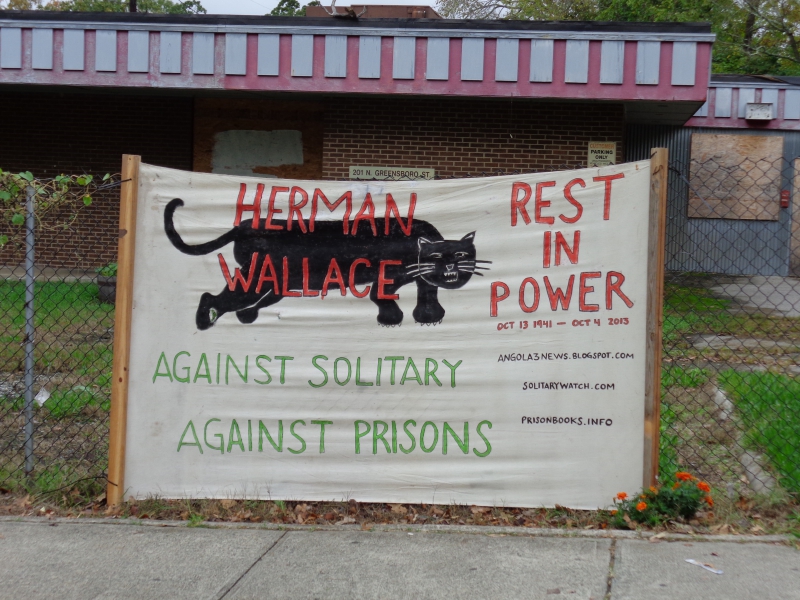 original image (4608x3456)
A banner posted to the fence at the disputed CVS building that was squatted/occupied last year as a campaign of resisting corporate development; at the corner of Weaver St. and Greensboro St in Carrboro, NC on October 12th. This banner was posted to coincide with Herman Wallace’s memorial service in New Orleans. 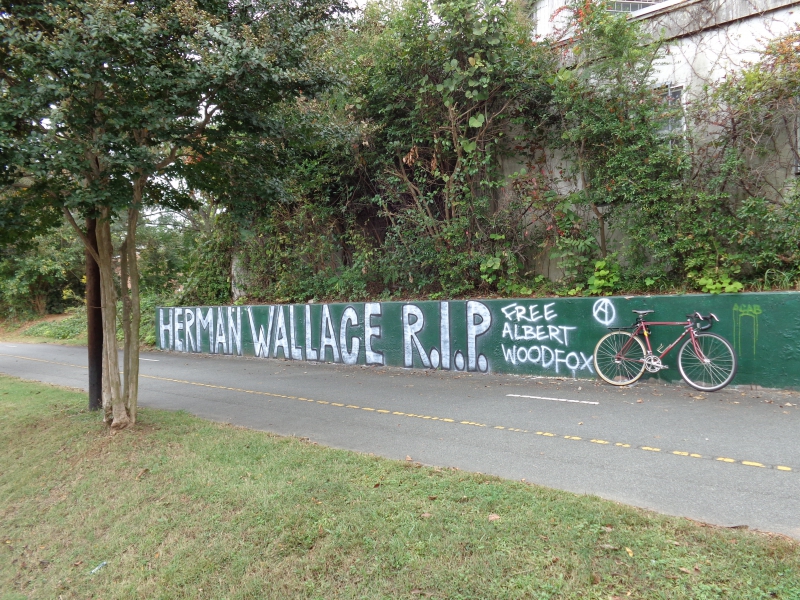 original image (4608x3456)
Earlier this week artists decorated the Carrboro bike path with a memorial to Herman Wallace. The memorial reminds us that Albert Woodfox is still locked up and that the struggle is not over.

http://prisonbooks.info/2013/10/12/remembrances-for-herman-wallace-in-north-carolina/
END_OF_DOCUMENT_TOKEN_TO_BE_REPLACED
Add Your Comments
Support Independent Media
We are 100% volunteer and depend on your participation to sustain our efforts!