by Mike Rhodes (editor [at] fresnoalliance.com)
The City of Fresno has posted notices that they will destroy the last homeless encampment in town. Unlike the destruction of other homeless encampments, the city is not claiming that the Grain Silo encampment is the site of drug sales, violence, or other criminal activity. 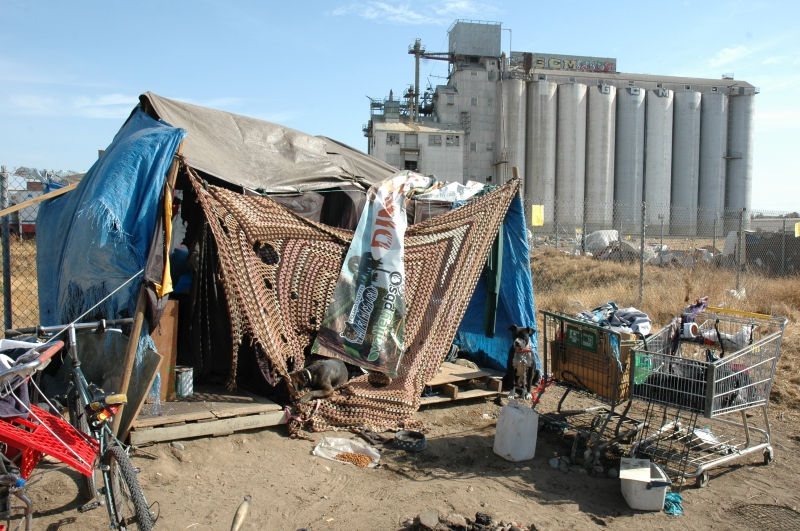 The destruction of this homeless encampment does not come as a surprise, as it follows the bulldozing of several downtown shelters in August and September. There was a lull in the action as the Fresno Police Department stabilized the streets where the encampments had existed, making sure that nobody re-established an encampment.

That strategy was augmented last week by a new initiative by the city to take homeless peoples property if it was left unattended. For example, if a homeless person goes into the Poverello House for lunch and leaves their property outside the gate, it will probably be taken by city sanitation workers, backed up by the police. The property is then taken to an undisclosed location for 90 days. If homeless people can navigate through the city bureaucracy, they could (theoretically) reclaim their property. If they don’t recover their property in 90 days, it will be destroyed. “What good would it be to get my property back if I have to carry it all around with me 24 hours a day, 7 days a week,” one homeless man told me. Nobody could fault the City of Fresno for not being creative in finding new ways to make homeless peoples lives more difficult.

The Grain Silo encampment is the last major site where the homeless have been allowed to live in a community, with neighbors of their choosing. Now, most of the homeless in downtown Fresno are more isolated and vulnerable to predators because they do not have neighbors they can count on to protect them. This is a particular problem for homeless women, but is also an issue for many of the men who are now sleeping in doorways, under oleander bushes, or in the park.

There is a group of homeless advocates who are working on solutions to the city’s increasing attacks on the homeless. You can find out more at: http://www.helpfresnoshomeless.org/
END_OF_DOCUMENT_TOKEN_TO_BE_REPLACED
§This is a View of the Grain Silo Homeless Encampment
by Mike Rhodes 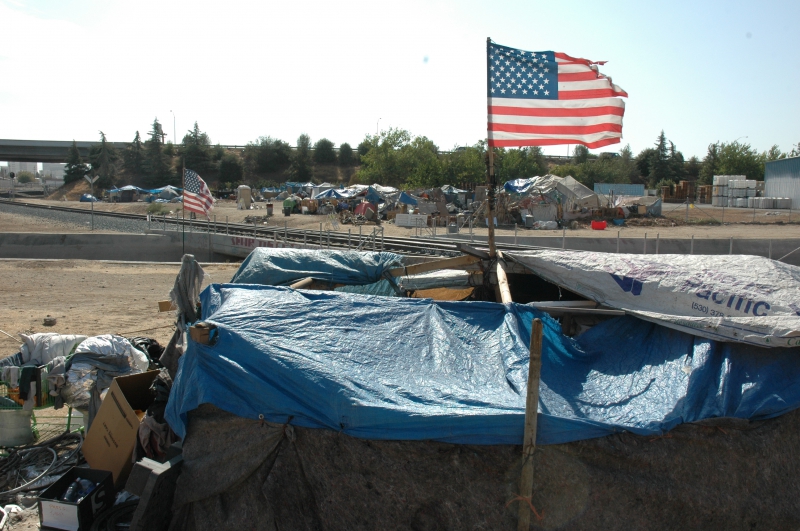 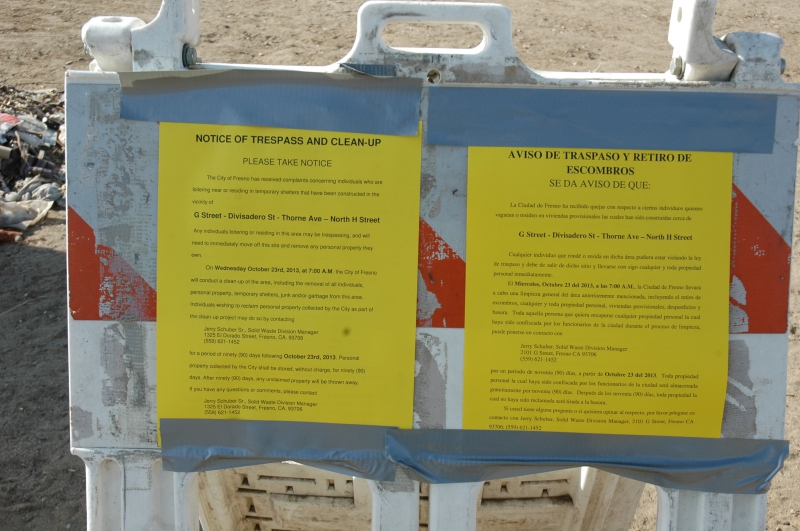 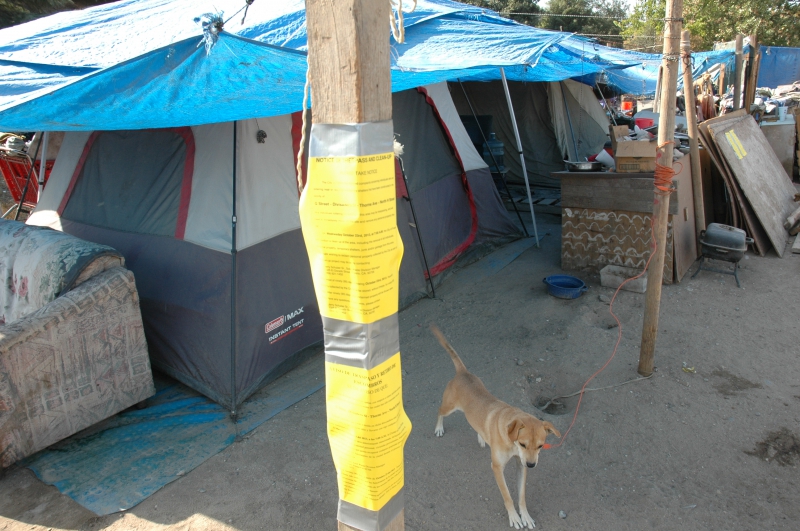 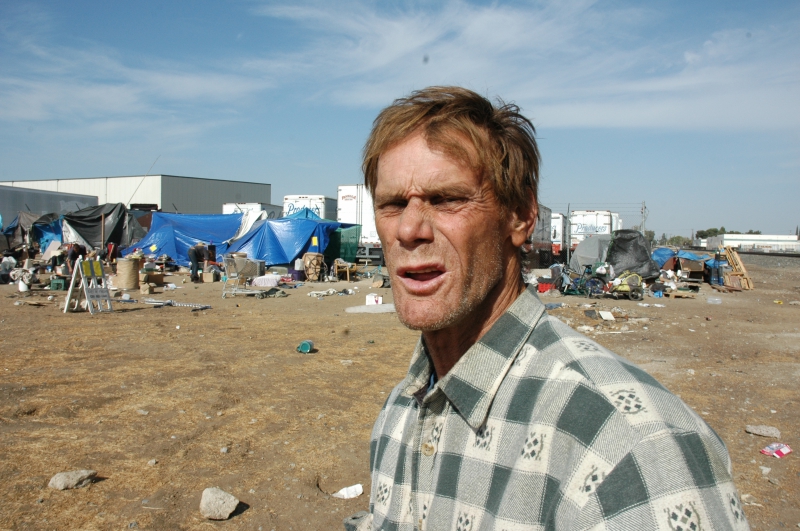 original image (3008x2000)
Gary Marks lives just north of the Grain homeless encampment. The city posted notices at this location too. Gary says he has no idea where he will go.
END_OF_DOCUMENT_TOKEN_TO_BE_REPLACED
Add Your Comments
Comments (Hide Comments)
§Resistance and Solidarity
by Mike Rhodes
Homeless advocates and the homeless residents of the last homeless encampment in downtown Fresno are organizing to resist the city’s effort to destroy the Grain Silo/Canal Bank encampment. When the police and sanitation workers arrive Wednesday morning (October 23 at 7 a.m.) they will be met with Civil Disobedience (CD) as Fresno residents resist the cruel and inhumane policies of the City of Fresno. Organizers are asking for as many people as possible to come and participate in CD (stand in front of the bulldozers) or witness (bring your video camera) when the community says ENOUGH!

The Grain Silo/Canal Bank encampment is located west of Palm and H street (west of the grain silos and next to the canal)
Add a Comment
§Call for Christian Acts of Courage
by Rev. Floyd Harris Jr.
I am tired of playing around with the Mayor Ashley and the Fresno City council. This government is destroying lives and now I have people walking the streets of Fresno tonight like zombies. I have waited for city leaders, in Fresno (City Hall & Board of Supervisor) to come up with a solution to this homeless problem but I have not seen anything work. The City of Fresno will pay #1 man 10,000 of our tax dollars to destroy God's people. I have a Mayor who claims to be a Christian (Christ Like) but has zero compassion for poor people. Community activist and homeless organizers gave the mayor and city council a plan on how to create a legalize homeless encampment and they have refuse. ENOUGH IS ENOUGH!! Once again the government have destroyed there encampments. Mayor Ashley has the sprite of Bull Corner in the 1960's. I'm looking for people in the Fresno Community who is ready to STAND FOR JUSTICE. I will let everyone know about the first Recall Meeting... Your Servant Rev. Dr. Floyd D. Harris, Jr.
Add a Comment
Support Independent Media
We are 100% volunteer and depend on your participation to sustain our efforts!