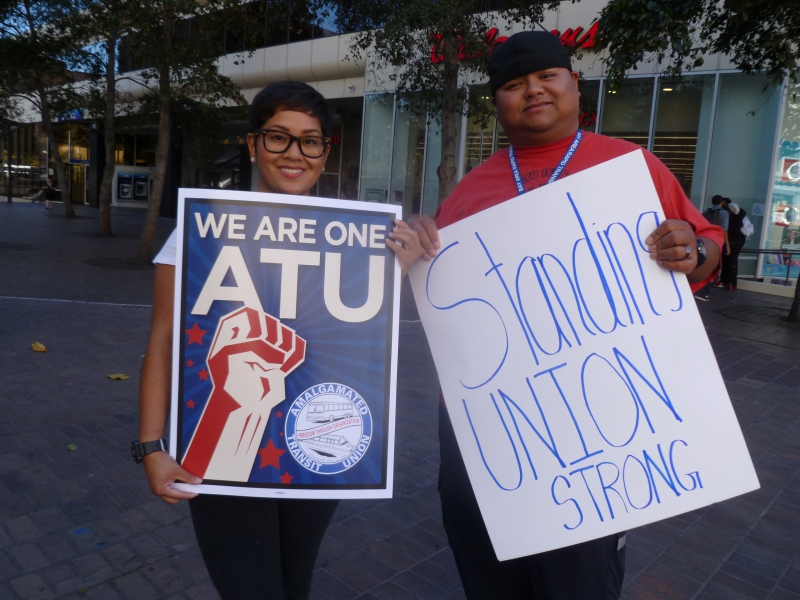 BART management is playing hardball and so can we. BART is demanding cuts to our real wages without adjusting for cost of living. BART will not agree to basic safety demands such as tunnel lighting, endangering riders and workers. BART wants us to pay more for health benefits and to pay in for pensions even though we are not covered by Social Security. Four years ago BART received $100 million in concessions from us. Today they have a $125 million a year operating surplus, yet they demand concessions.

Why are BART Union officials and negotiators volunteering to make concessions? Our bargaining teams just made an offer to management that would reduce our wage demands by 2.5% per year, increase our payments for health benefits by 15% and includes a “swap” on pensions that encourages management to reduce or even dispose of the pension plan.

No More Concessions! In 2011 thousands of public workers converged on the State Capitol in Madison, Wisconsin to fight Governor Scott Walker’s union-busting proposals. It was a historic moment in Labor history. But their Union officials, along with the Democratic Party, sold the workers out. Their Unions negotiators offered concessions to Walker. Each time a concession was made, Walker wanted more. That’s what BART managers management is doing to us. Members have a right to attend and observe bargaining. It is time to say, “No More Wisconsins!”

2. We demand full transparency. We demand a complete report after every bargaining session.

3. We demand accountability; our negotiators must make no further concessions. Recall and replace union officials who don't represent us.

4. We demand an emergency membership meeting in order for the membership to vote down all concessionary offers.

5. We must rally all working people and the community to prepare to beat back the attack on all workers, starting with the BART workers.

Currently there are thousands of Union workers working without a contract. If we lose, they’re going down with us. Our communities will also suffer with increased fares and unsafe riding conditions. We all need to stand together in our struggle for a living wage, free quality health care, and retirement with dignity. This can happen if there is a political willingness to cut fares through taxation of developers and corporations whose property values increase sharply as a result of BART expansion.

6. We need to prepare now for an all-out strike on October 10th, starting with an appeal to AC Transit workers (ATU 192) to support our struggle with a solidarity strike. AC Transit workers recently voted down a concessionary deal and are working without a contract. We need to also appeal to all other Bay Area transit workers to honor our picket lines. A strike honored by transit workers, supported by Labor with community support, will blow management’s demands for concessions off the table and out the door. It would strike a blow for all working people: the employed, unemployed, and underemployed.

7. We need to reach out to all of the members of SEIU 1021 and AFSCME, along with other ATU Locals in Northern California, to insure our struggle is not isolated.

8. BART management is training strikebreakers. The Union movement must be mobilized to stop them. We need to let union busters know that the Bay Area will not be another Wisconsin!

We have the power to turn the tide!
We must use it to win!