The encampment began on October 10th, 2011 at Oscar Grant Plaza (renamed from Frank Ogawa Plaza a few days later). Two years hence we're going to start two hours earlier, at 2:00 PM; otherwise these posters (scroll down) from back then seem an appropriate decoration.

Come join comrades for its 2nd anniversary. Talk. Reflect. Enjoy. Music. Speakers. Food will be served, and a movie will be shown as soon as it gets dark.

Theme: Solidarity with the 60 day California Prisoners' Hunger Strike and the 60 hour Solidarity Fast by two OO participants, opposition to solitary confinement, privatization of prisons and the rest of our commons. The continuing struggle against the economic destruction of the 99%.

Keynote speakers: Shane Bauer and Sarah Shourd, kidnapped and in solitary confinement in Iran before Occupy began, and who spoke to Occupy Oakland days after the encampment started.

Presentations: We might have some short presentations by some active area groups that have current or former Occupy Oakland members:

Come to the Occupy Oakland GA on Sundays at 2:00 PM at OGP (14th & Broadway) on the City Hall steps or in the amphitheatre to plan, pick up flyers and help organize. The next one is on September 29th.

We are also planning a more sobering event for October 25th. Stay tuned.

View archived images of our original occupation flyers on IndyBay! 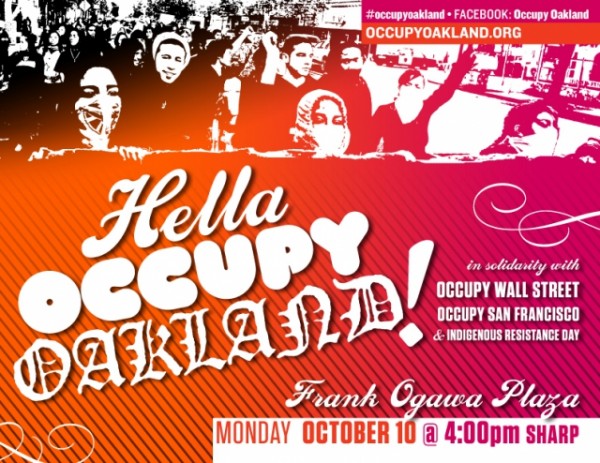