Add an Event
Newswire
Calendar
Features
Home
Donate
From the Open-Publishing Calendar
From the Open-Publishing Newswire
Indybay Feature
Publish to Newswire
Add an Event
Related Categories: Santa Cruz Indymedia | Health, Housing & Public Services
Are Public Safety "Activists" Planning to Shame Drug Addicts and Needle Users?
by Santa Cruz Progressive Newswire
Sunday Sep 29th, 2013 3:19 PM
Public safety "activists" in Santa Cruz recently began planning a protest against those they believe are creating hypodermic needle waste in outdoor and natural areas locally. One individual has suggested shaming clients outside of the county's needle exchange office, where drug users may obtain clean needles when they turn in used ones. In a Facebook discussion, Chris Brown said, "What about taking pictures of those going in and out and posting them to a web site in an effort to shame them? I admit it seems rather creepy and low but????" 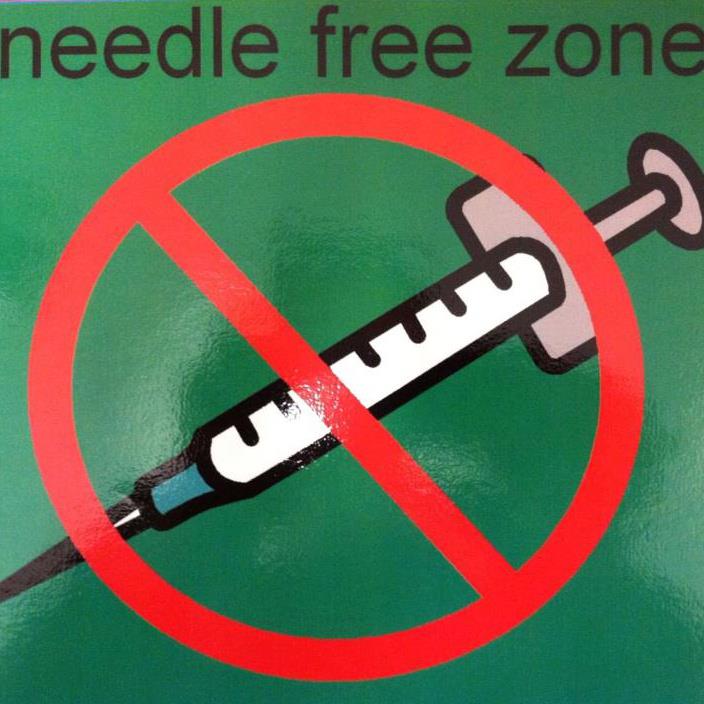 They are members of the Facebook group "Needle Free Zone - Santa Cruz County," and those planning the protest include many well known names: Ken "Skindog" Collins, Valerie Abbott, Samantha Olden, Kim Gardner, Meriah Campbell, Janell Whiting, Ellie Chapman, Chris Brown (not to be confused with Santa Cruz Clean Team admin Chrissy Brown, who is also in the group but did not comment on the plans for a protest), and Lewis Roubal.

Some members of Needle Free Zone Santa Cruz County say they are still angry that in March, members of Take Back Santa Cruz "softened" down a protest march that went from from Harvey West to City Hall. The protest was originally to include a stop by the Homeless Services Center (HSC), which Samantha Olden said was supported by Ken "Skindog" Collins. (Collins has been the subject of controversy more recently after he was captured on video poking and yelling at a homeless person at a clean up event with the Clean Team in March of this year)

The idea to stop at the HSC was scrapped. Olden said the protest was, "softened up into the event that took place."

"I agree that we need to get loud and more demonstrative," she said, "that we are "mad as hell and we're not gonna take it anymore". We pay for the hsc and needle giveaway with our hard earned tax dollars. I personally want a refund! And will not vote for anyone that isn't willing to close the "exchange"."

The group is similar to, and includes members of, other public safety groups in Santa Cruz that focus on the litter and waste associated with homeless drug addicts (and homeless people in general), such as The Santa Cruz Clean Team and Take Back Santa Cruz.

Like the other groups, Needle Free Zone Santa Cruz County is somewhat myopic in its understanding of the issues surrounding homelessness and needle use, and members of the group rarely talk about people on the street who are diabetic and sometimes need to use syringes when in public. Needle Free Zone Santa Cruz County members have distributed and stuck stickers all over public spaces in the city that say "Needle Free Zone." Apparently no consideration has been given to those who need to use syringes for various personal medical reasons.

Kim Gardner said in the protest thread, "...obviously pictures and data and speaking at meetings aren't changing anything."

The idea of shaming individuals who are attempting to access the needle exchange, a legal medical service, and to plan a protest for the location of the exchange seems remarkably similar to the political agitation and violence that occurs at abortion providers.

* In 2002, NEPs reported removing nearly 25 million used syringes from communities.
* According to the Centers for Disease Control, the one-time use of sterile syringes remains the most effective way to limit HIV transmission associated with injection drug use.
* A study by the National Institutes of Health found that NEPs “show a reduction in risk behaviors as high as 80 percent in injecting drug users…”
* NEP participants have been found five times more likely to enter drug treatment than those who had never used an exchange.
* NEPs throughout the country have reduced HIV transmission rates by one-third to two-fifths.
* An analyses of a New York State-approved NEP found that during a 12-month period, an estimated 87 HIV infections were averted as a direct result of the use of needle exchange.
* Injection drug users who are afraid of being arrested while carrying drug paraphernalia are 1.74 times more likely to share syringes, and 2.08 times more likely to share injection supplies than other users.

Kim Gardner
So, I didn't say anything on TBSC because I didn't want to get in trouble but, I really think it's time to take to the streets and have a protest. I like when Ellie stood by the 'Welcome to Santa Cruz' sign shaking a container of needles. I'm thinking having people all up and down Ocean Street, a few of us at each spot, with signs and found needles.
I know that the City Councils hands are tied and I'm not sure the County Supervisors are going to give a shit, but, obviously pictures and data and speaking at meetings aren't changing anything.
Share · September 9 at 11:14am
8 people like this.

Samantha Olden When the TBSC march from Harvey west to city hall was being planned the original idea that I had and was being supported by Ken SkinDog Collins was to meet at Harvey west, walk past the hsc and along the river levee as a representation of the areas that we most need to take back. It was softened up into the event that took place. I agree that we need to get loud and more demonstrative - that we are "mad as hell and we're not gonna take it anymore". We pay for the hsc and needle giveaway with our hard earned tax dollars. I personally want a refund! And will not vote for anyone that isn't willing to close the "exchange".
September 9 at 11:25am via mobile · 7

Kim Gardner I just drove up Capitola Ave from 7th and thought that it we should also have people there and from 7th/Soquel on up towards the flea market.
September 9 at 11:34am via mobile · 2

Meriah Campbell Date and Time!! Let's do this!! People NEED to get their needle bubble popped;)
September 9 at 11:58am via mobile · 5

Sara Schell I'm all over being on Ocean St with a sharps container and sign!
September 9 at 12:00pm via mobile · 2

Chris Brown I'm in too. Whatever Ellie says I'm down with. I would also like to know what people think about protesting outside the needle exchange itself? What about taking pictures of those going in and out and posting them to a web site in an effort to shame them? I admit it seems rather creepy and low but???? I don't know.
September 9 at 12:06pm · 5

Kim Gardner I think it should be on a Sunday and we should keep the found needles instead of turning them in so we have lots for people to shake in a bottle. I really like the idea of people protesting at different spots around town.
September 9 at 12:44pm · 1

Lewis Roubal Time and Place I'm in just PM me when. We need Maximum Exposure and this is a great forum to do it i. Squeeky wheel.....
September 9 at 1:11pm

Sarai Thomas-Brown I'm down!
September 9 at 2:17pm via mobile

Patti Barich Schell I have a full container (large) of found needles sitting in my garage.....
September 9 at 2:18pm · 2

Meriah Campbell I don't think posting pictures is a good idea, but definitely a protest in front of the needle exchange!!
September 9 at 2:29pm via mobile

Ellie Chapman So lets get permits and do this right. If we want a big march again I'm down. Lets get together and talk. I don't want trouble but yes another something big should be done.
September 9 at 3:21pm via mobile · 2

Kim Gardner I wasn't thinking a 'march' but more of people all around town during a specific time and day holding up signs and such.
September 9 at 3:24pm · 3

Ken SkinDog Collins Why protest to the public? 99% already agree with us. Why not protest the County Supervisor meeting tomorrow at 9am? I am going in with my sharps container and i will be rattling away with it. If we fill up that room with 30 people demanding change, we will see progress. Come join me.
September 9 at 3:49pm · 3

Ellie Chapman Skinny most of us can't take off work. I know I can't. Do u want to met with me and maybe come up with something? One thing is for sure the public is behind us but a lot don't know about needles. At least that's what I'm finding out or the acceptance is ok.
September 9 at 4:04pm via mobile · 3

Meriah Campbell The meeting is unfortunately during my morning school drop off:( but if people are able to PLEASE go and represent!!! Remember to make a call to the news;)
September 9 at 4:11pm via mobile · 1

Ellie Chapman Anyone of u can make the supervisors meeting please go and shake ur sharps
September 9 at 4:11pm via mobile · 1

Kim Gardner O.K...just read Ken SkinDog Collins post in TBSC about how inattentive the Supervisors were at this mornings meeting (sorry I didn't make it...I'm in the middle of moving and I was exhausted this morning).
This protest ball is rolling...stay tuned for details!
September 10 at 12:11pm · 1

Janell Whiting So when are we doing this?? I want to get noisy.
September 21 at 10:39am via mobile