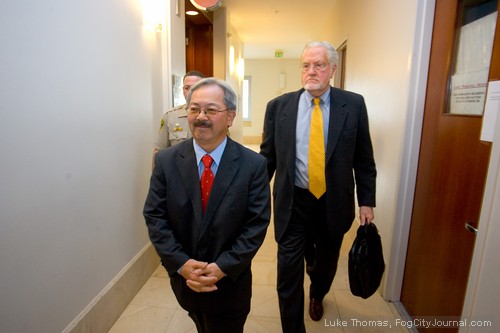 SF Mayor Ed Lee with the support of the Board of Supervisors pushes tens of millions of subsidies for the tech barons while attacking the BART workers and other public workers and opposing a transit tax to make the developers and downtown corporations pay for mass transit at BART and Muni.
http://www.upwa.info
§10/3 Twitter BART Workers Support Rally
by United Public Workers For Action Thursday Sep 26th, 2013 4:48 PM 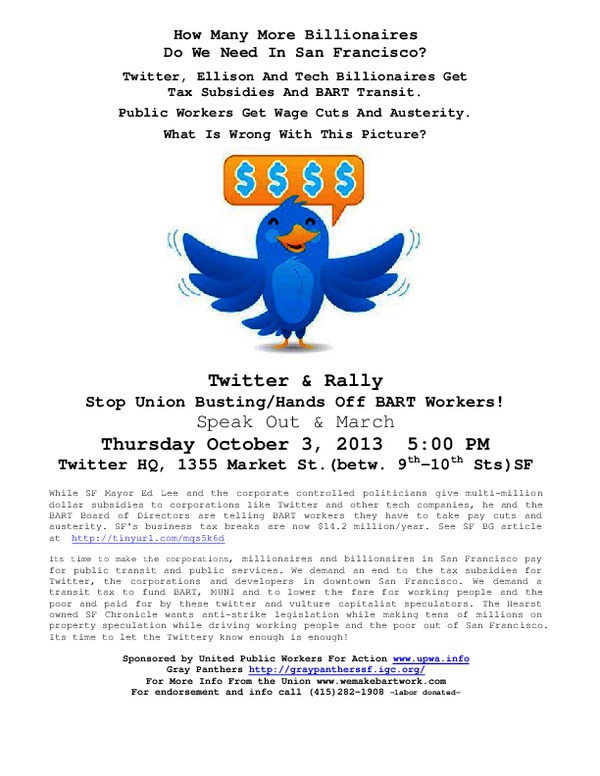 
Labor and much of the progressive community worked with downtown and the Mayor's Office last year to craft a pension-reform bill that took away benefits from city employees. The unions came to the table, recognized the city's financial problems and bought into a compromise, even though it took money out of their pockets.

And now big business, with the support of Mayor Ed Lee, wants to reform the local business tax in a way that doesn't bring the city a dime of new revenue (and hurts small business in the process).

In other words, it's fine to seek compromise when it's about cutting workers pay and city costs. When it's about asking big business (and a lot of big businesses, particularly tech businesses, in this town are doing exceptionally well right now) to chip in just a little more, to do the right thing, address the revenue side of the ledger and pay a fair share, the answer is No.

That's not ok — and the supervisors shouldn't go along with it.

The essence of the proposal from the mayor's office (orchestrated in significant part by billionaire Ron Conway) is to shift the city's main business tax from a levy on payroll to a levy on gross receipts. There are winners and losers in that scenario, and the business community is split: High-tech firms tend to have high payrolls compared to gross receipts, and finance, insurance and real-estate tends to have high gross receipts compared to payroll. So the burden could shift from the likes of Twitter and Zynga, who would pay less, to the commercial office and financial-services sector, which would pay more. In other words, the new business elite likes the change, and the old guard doesn't.

Small business doesn't like it much, either — a lot of the tiniest companies in town now pay no tax at all, and would be hit with at the very least an annual license fee. So the percentage paid by the smallest would go up

You can certainly argue that tech is creating more jobs than other sectors of the economy these days. And while it's fun to watch the Chamber of Commerce and Conway's San Francisco Citizens for Technology and Innovation butt heads (and progressives are looking for ways to exploit those differences), the fight between Twitter and the Business Owners and Managers Association is a sideshow.

The real problem is that the mayor's plan has ome would be revenue-neutral — that is, the big business community, which has never paid its fair share of the city's tax burden, would be doing nothing at all to help with the structural budget deficits that plague San Francisco. Labor gives up hundreds of millions of dollars. Neighborhoods suffer with service cuts. The poorest San Franciscans give up housing and health care and social services in the name of balancing the budget. And the wealthiest companies in town smirk and says: Sorry, we won't help. Screw you, buddy.

That's a nonstarter. A lawsuit by 52 big businesses over an earlier gross receipts tax, settled in 2001, cost the city as much as $50 million a year — and at the very least, this new tax should get that back. A plan that doesn't at the very least bring in $50 million to $100 million a year of additional revenue from the big operators — tech, finance, real-estate, and the rest — amounts to the proverbial shifting of deck chairs on the Titanic. If the mayor won't move, a grassroots alternative needs to be on the November ballot.


http://www.nytimes.com/2011/10/21/us/mayors-political-machine-goes-into-high-gear-in-quest-for-full-term.html?_r=1&scp=1&sq=mayor%20ed%20lee&st=cse
October 21, 2011
Mayor’s Political Machine Goes Into High Gear in Quest for Full Term
By GERRY SHIH and ZUSHA ELINSON
On Sept. 14, about a dozen business and labor leaders gathered in an eighth-floor conference room in the Financial District. They met for an hour, rehearsing their strategy to assure that Ed Lee, the interim mayor of San Francisco, is elected to a four-year term on Nov. 8.

A number of well-connected San Francisco figures were present, including Steve Falk and Jim Lazarus of the San Francisco Chamber of Commerce; Rob Black of the Golden Gate Restaurant Association; Leon Chow, the head of the United Healthcare Workers West, and Enrique Pearce, a political consultant closely associated with Rose Pak, the Chinatown lobbyist.

The people there represented four independent political action committees that, in the weeks since, have collectively spent more than $400,000 to broadcast advertisements, send political mail and deploy an army of field workers on Mr. Lee’s behalf, effectively turbocharging his campaign.

According to a poll conducted by The Bay Citizen and the University of San Francisco released on Monday, Mr. Lee claimed 31 percent of first-place votes, far outstripping his nearest challenger, Dennis Herrera, the city attorney, who had 8 percent.

Mr. Lee also earned an approval rating of 78 percent. Corey Cook, a professor of political science at the University of San Francisco who helped analyze the poll, said it was an “astonishing” number for a mayoral candidate. It is twice as high as the approval rating for Willie Brown, one of San Francisco’s most celebrated mayors, when he won re-election in 2000.

Mr. Lee’s dominance shows how San Francisco, despite its reputation as the liberal poster child of American politics, remains in the grip of a classic political establishment that has overwhelming influence in elections and policy battles. The mayor’s ascent in the polls has been helped along by independent groups — largely associated with the city’s political machine — that can raise unlimited amounts of money but are prohibited from coordinating their activities with Mr. Lee’s official campaign.

In the past 10 months, Mr. Lee’s supporters have united around the centerpiece of Mr. Lee’s legislative accomplishments, a pension reform deal struck with the city’s labor unions: Proposition C on the upcoming ballot.

The measure has won favor in polls, as Mr. Lee’s power brokers have worked to pressure his opponents, notably Jeff Adachi, the public defender of San Francisco and the author of an opposing pension reform plan.

During the past year when labor and business leaders met with Mr. Lee to craft Proposition C, the labor unions requested that Mr. Adachi be kept out of those meetings. This month, the Proposition C campaign launched video advertisements comparing Mr. Adachi to Gov. Scott Walker of Wisconsin, a Republican, who gutted the collective bargaining rights of public employee unions.

According to the Bay Citizen/U.S.F. poll, Proposition C is leading Mr. Adachi’s plan, Proposition D, by nine percentage points. The telephone poll was conducted Oct. 7-13 in English and Chinese with 551 likely voters throughout San Francisco by MAXimum Research of Cherry Hill, N.J. The margin of sampling error is plus or minus four percentage points.

Proposition C has some powerful supporters, including Mr. Lee, all 11 supervisors, Senator Dianne Feinstein, Representative Nancy Pelosi, and the major labor unions. Neither Mr. Adachi nor his measure has attracted endorsements from the city’s political establishment.

“The names change, the faces change, but the machine is still there,” Mr. Adachi said. In a campaign mailer, Mr. Adachi called Proposition C “a backroom deal.”

Warren Hellman, a financier who paid $200,000 for an actuarial study of Proposition C and donated $100,000 to the campaign for it, took issue with Mr. Adachi’s characterization.

“I guess this is a backroom with enough room for the whole city, the mayor, the labor unions,” Mr. Hellman said. “This backroom must be as big as Pac Bell Park.” (Mr. Hellman is chairman of The Bay Citizen but plays no role in editorial operations.)

One of the most formidable groups supporting Mr. Lee is the Alliance for Jobs and Growth, which counts PG&E, Wells Fargo, the Police Officers Association and the United Healthcare Workers West among its members. Vince Courtney Sr., executive director of the alliance, said he organized the Sept. 14 meeting so that the independent groups supporting Mr. Lee could divide the work.

“Our alliance between business and labor allows the labor folks, who have the bodies, to work on the ground,” Mr. Courtney said. Meanwhile, a group organized by Ron Conway, a Silicon Valley investor, has raised close to $400,000 from the tech sector and is handling “the stuff that’s really expensive: mail, TV, polls,” Mr. Courtney said.

“We’ll cooperate with anyone supporting Ed Lee,” he added. “I’ve never seen an election in San Francisco where the mayor has run in such a one-sided race. I just hope it holds up.”

On Thursday, Mr. Lee became the first candidate to exceed a $1.577 million spending limit imposed by the city’s Ethics Commission. The cap does not apply to Mr. Lee because he chose not to receive public financing, unlike the other leading candidates.

After Mr. Lee entered Room 200 as interim mayor in January, he presented himself as a consensus-building nonpolitician who had no interest in running for election.

His pension reform deal — which would achieve a fraction of the savings he said were needed to stave off the city’s bankruptcy — put him in the good graces of the public sector unions. He won over the police union by naming a popular insider in the force, Greg Suhr, as the chief.

Mr. Lee impressed old-line business interests and Silicon Valley with two tax breaks for startups — worth hundreds of millions of dollars. That won him the support of Mr. Conway, who persuaded Marc Benioff, chief executive of Salesforce, a “cloud” computing company, and Sean Parker, the co-founder of Napster, to contribute more than $400,000 to an independent effort backing the mayor’s campaign.

Mr. Lee’s opponents say that by going back on his promise the he would not run, the events of the past year have conferred an unfair advantage on Mr. Lee.

“It’s not rigged in terms of ballots floating in the bay,” said Aaron Peskin, former president of the Board of Supervisors. “But the appointment of Ed Lee to the position of interim mayor was based on a promise to David Chiu and the people of San Francisco.”

Mr. Chiu, the president of the Board of Supervisors who also is running for mayor, helped engineer Mr. Lee’s appointment on the assumption that Mr. Lee would not run. It was only days before he jumped into the race that Mr. Lee told Mr. Chiu he had changed his mind.

If the plan all along was for Mr. Lee to run for election, he and his camp “couldn’t have strategized it more brilliantly,” said Mr. Cook, the University of San Francisco professor. “He brought everyone together by saying he wasn’t running, got the issues solved and then jumped in the race and said, ‘Who do you trust to solve them?’ ”


http://www.upwa.info
Add Your Comments
LATEST COMMENTS ABOUT THIS ARTICLE
Listed below are the latest comments about this post.
These comments are submitted anonymously by website visitors.