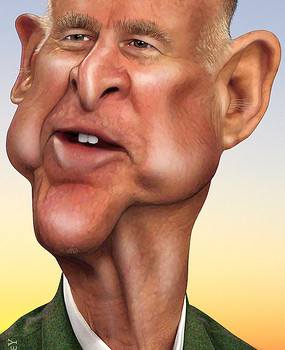 “While SB 4’s requirements went significantly farther than the petroleum industry felt was necessary, we now have an environmental platform on which California can look toward the opportunity to responsibly develop the enormous potential energy resource contained in the Monterey Shale formation,” said Catherine Reheis-Boyd, President of the Western States Petroleum Association (WSPA).

Reheis-Boyd, who previously feigned disappointment with the bill even after it had been gutted with last minute pro-oil industry amendments, gushed, “With the signing of Senate Bill 4, California has the toughest regulations of hydraulic fracturing and other energy production technologies in the country.”

“There remains a great deal of work to clarify and implement the requirements of SB 4. WSPA and our members stand ready to work with the Administration, Department of Conservation and other stakeholders to ensure SB 4 is implemented effectively and fairly,” she concluded.

All mainstream media accounts of the Pavley legislation that I have seen failed to mention the alarming fact that Reheis-Boyd, in one of the biggest environmental scandals in California over the past decade, chaired the Marine Life Protection Act (MLPA) Initiative Blue Ribbon Task Force to create alleged “marine protected areas” on the Southern California coast. The oil industry superstar also served on the task forces for the Central Coast, North Central Coast and North Coast.

Senator Fran Pavley and Governor Jerry Brown claim the legislation "regulates" hydraulic fracturing ("fracking"), acidizing, and other oil extraction techniques, while opponents, including over 100 environmental, consumer and community groups in the coalition Californians Against Fracking, say the bill actually creates a clear path to expanded fracking in California.

Strangely enough, Reheis-Boyd essentially agreed with the opponents' assessment that the bill will pave the way for expanded oil drilling in the Monterey Shale Foundation.

"SB 4 tragically green-lights an extremely dangerous practice with terrible public health impacts near the homes and schools of California’s communities already most overburdened by pollution,” said Madeline Stano, Luke Cole Memorial Fellow at the Center on Race, Poverty & the Environment.

“New amendments to Senator Pavley’s Senate Bill 4 could pave the way for more fracking between now and 2015,” said Ross Hammond, senior campaigner with Friends of the Earth, prior to the Legislature's passage of the bill. “The latest round of amendments would require state officials to continue allowing fracking while environmental review would be conducted only after the fact.”

Fracking, short for hydraulic fracturing, is a water-intensive process where millions of gallons of fluid – typically water, sand, and chemicals, including ones known to kill fish and cause cancer in humans– are injected underground at high pressure to fracture the rock surrounding an oil or gas well. This releases extra oil and gas from the rock, so it can flow into the well, according to Food and Water Watch. (http://www.alternet.org/fracking/california-poised-enact-dangerous-fracking-bill)

Senator Pavley praised Brown's signing of SB 4, describing it as an "important law."

“I am pleased that Governor Brown is committed to rigorously implementing this important law,” Senator Pavley said. “I look forward to working with the governor and Natural Resources Secretary Laird to ensure that we meet the expectations of all Californians of transparency and rigorous oversight when the law kicks in on January 1, 2014.”

Pavley added, "Starting January 1, 2014, oil companies will not be allowed to frack or acidize in California unless they test the groundwater, notify neighbors and list each and every chemical on the Internet. This is a first step toward greater transparency, accountability and protection of the public and the environment. Now we need immediate, robust enforcement and widespread public involvement to ensure the law is upheld to its fullest."

“I am also directing the Department of Conservation, when implementing the bill, to develop and efficient permitting program for well stimulation activities that groups permits together based on factors such as known geological conditions and environmental impacts, while providing for more particularized review in other situations when necessary,” he stated.

Fracking will exact big toll on fish, people and the environment

Fracking opponents were disappointed, though not surprised by the passage of Senate Bill 4, considering the enormous power of the oil industry in California.

Caleen Sisk, Chief of the Winnemem Wintu Tribe, said Brown's signing of Pavley's bill shows how "we are led by representatives who believe oil is more important than water for the people."

"There is such a high price to pay for the last drops of oil - then what? Even this extreme mining for oil will come to an end!" Sisk noted.

Activist Lauren Steiner, who led a petition campaign that got 20,000 signatures urging Pavley to drop her bill and fight for a ban instead, summed up the essence of Senate Bill 4 in her article, "California's Fracking Regulatory Bill: Less Than Zero," (http://www.commondreams.org/view/2013/08). Rather than actually making fracking safer, "the flawed bill sets up a process for notification, disclosure, monitoring and permitting and simply calls for future regulations by other agencies and a scientific study," she said.

After the passage of the bill, Steiner noted, "When I wrote the article I thought that the passage of the bill would be worse than having no regulations because it would give legislators political cover not to pass a moratorium. But now that these poison pill amendments have been added, it appears that the state regulators are prohibited from imposing a moratorium and that a CEQA review is optional for the next 15 months. Therefore, this bill ended up being worse than I thought. I just wish the environmental organizations, especially the ones that favored a ban over regulations, would have opposed the bill more actively."

The evidence of the enormous threat that fracking poses to fish, water, air and the environment continues to pile up. Oil companies have used 12 dangerous “air toxic” chemicals more than 300 times in the Los Angeles Basin in recent months, according to a new report from the Center for Biological Diversity that is drawing concerned reactions from public health advocates and an L.A. city councilmembers. Air toxics are chemicals considered among the most dangerous air pollutants because they can cause illness and death. (http://www.indybay.org/newsitems/2013/09/05/18742764.php)

A joint peer-reviewed study by the U.S. Geological Survey and the U.S. Fish and Wildlife Service released on August 28 also revealed that hydraulic fracturing fluids were the likely cause of the widespread death or distress of aquatic species in Kentucky's Acorn Fork, including endangered blackside dace, after spilling from nearby natural gas well sites. (http://www.usgs.gov/newsroom/article.asp)

Finally, not only does fracking threaten the environment, but the practice has significant social costs, as revealed in a new report from Food and Water Watch. This study is the first detailed, long-term analysis of the social costs of fracking borne by rural Pennsylvania communities: https://www.foodandwaterwatch.org/reports/the-social-costs-of-fracking/

Fracking in the larger context of corporate greenwashing

The passage of Pavley's green light for fracking bill occurs in the larger context of the oil industry's enormous influence on California environmental processes. Brown, Laird and Pavley were all strong supporters of the oil lobbyist-overseen Marine Life Protection Act (MLPA) Initiative to create questionable "marine protected areas" in Southern California, so it is no surprise that they will now be helping to implement the fracking of California – or as Reheis-Boyd claims, “responsibly” developing the “enormous potential energy resource contained in the Monterey Shale formation.”

These so-called “Yosemites of the Sea” and “underwater parks” fail to protect the ocean from fracking, oil drilling and spills, pollution, military testing, wind and wave energy projects and all human impacts on the ocean other than fishing and gathering. The alleged “marine protected areas” are good for the oil industry and ocean industrialists – and bad for fishermen, tribal gatherers, the environment and the people of California.

State officials and representatives of corporate "environmental" NGOs embraced the leadership of Reheis-Boyd and other corporate operatives who served on the MLPA Blue Ribbon Task Forces to create “marine protected areas” that fail to actually protect the ocean. By backing her leadership as a "marine guardian," they helped to increase the influence of the Western States Petroleum Association, the most powerful corporate lobbying group in Sacramento.

Two of the groups who were among the strongest supporters of the MLPA Initiative - NRDC and the League of Conservation Voters - also strongly backed Pavley's green light to fracking bill until the very last minute when amendments they suggested weren't included in the bill's final draft. They, along with Clean Water Action and the Environmental Working Group, withdrew their support on September 11 after the oil industry gutted the already very weak bill. (http://www.sfgate.com/science/article/Brown-signs-bill-to-regulate-fracking-4831759.php)

Now Brown, Laird and Pavley, true to form, will preside over expanded fracking in California that will result in tremendous damage to groundwater supplies, rivers and imperiled fish populations, and human health.

Brown, Laird and Pavley also support the Bay Delta Conservation Plan (BDCP) to build the twin tunnels under the Sacramento-San Joaquin River Delta. The construction of the tunnels will result in the export of massive quantities of northern California water to corporate agribusiness interests irrigating drainage-impaired land on the west side of the San Joaquin Valley.

The construction of the tunnels would hasten the extinction of Central Valley salmon and steelhead, Delta smelt, longfin smelt, green sturgeon and other species, as well as imperil the salmon and steelhead populations of the Trinity and Klamath river.

For more information about the hijacking of "marine protection" in California by the President of the Western States Petroleum Association (WSPA), go to: (http://yubanet.com/california/Dan-Bacher-Top-Censored-Environmental-Story-of-2012-Marine-guardian-lobbies-for-offshore-oil-drilling-fracking.php)

The oil industry, now the most powerful corporate lobby in Sacramento, exceeds corporate agribusiness, the computer and software industry, the film and television industry, the aerospace industry and other major corporate players in California politics in the power that it wields.

The association now has enormous influence over both state and federal regulators.Oil and gas companies spend more than $100 million a year to buy access to lawmakers in Washington and Sacramento, according to Stop Fooling California, an online and social media public education and awareness campaign that highlights oil companies’ efforts to mislead and confuse Californians. The Western States Petroleum Association (WSPA) alone has spent more than $16 million lobbying in Sacramento since 2009. (http://www.counterpunch.org/2013/08/07/the-ocean-frackers/)

The association spent the most of any organization in first six months of 2013, $2,308,789.95, to lobby legislators and other state officials, according to documents filed with the California Secretary of State.

When the oil industry wields this much power - and an oil industry lobbyist oversaw the process that was supposed to "protect" the ocean - it shouldn't be a surprise to anybody that California's ocean waters, as well as farmland, are now being "fracked." Both the state and federal regulators have completely failed in their duty to protect our ocean, bays, rivers and Delta.

For more information about the MLPA Initiative, go to: http://intercontinentalcry.org/the-five-inconvenient-truths-about-the-mlpa-initiative
Add Your Comments
Support Independent Media
We are 100% volunteer and depend on your participation to sustain our efforts!