by khubaka, michael harris (blackagriculture [at] yahoo.com)
The goal of the 1865 Project is to compile primary source documentation of the salient contributions of people of African ancestry during the California Gold Rush and unique challenges of Slavery in California (1840 -1865) We provided the design, content and community participants for the Opening Ceremony for Emancipating the Past: Kara Walker's Tales of Slavery and Power. The entire experience provided a wonderful example of the duality of opposites in providing a basic authentic look at Slavery in California. The journey continues... the legacy of Edwin Bryant Crocker and the early California Republican Party mirrors the U.S. Colored Troops from California during the US Civil War, and open secret continues, by design. 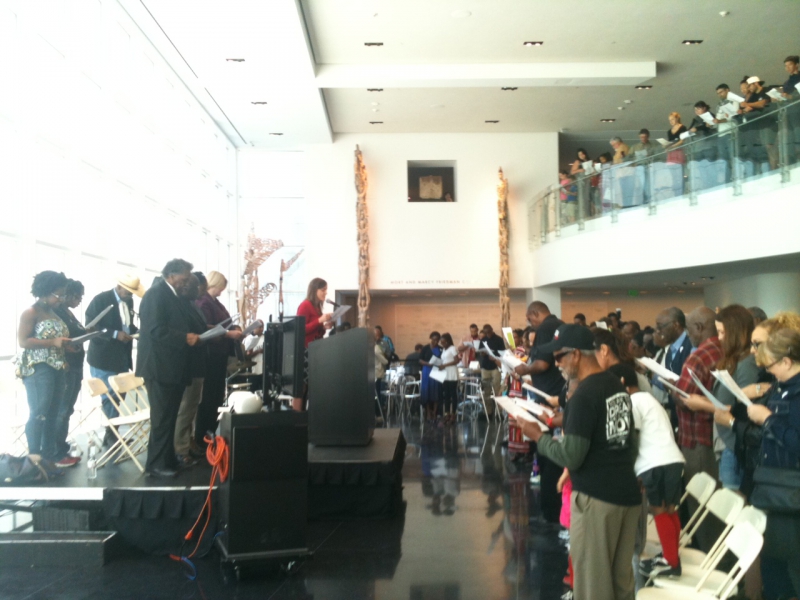 original image (1280x960)
Sacramento, California ~ Beginning at Noon, September 22, 2013, at the Crocker Art Museum, over 500 interfaith, intercultural and inter-generational community residents, from throughout Northern California, experienced a special Autumnal Equinox Program and collectively read aloud the Emancipation Proclamation on the anniversary of the day President Lincoln introduced his intention to officially issue a US Civil War measure to preserve the Union, September 22, 1862.

A general public gathering paused to reflect upon the diversity of community presentations, from a wide range of perspectives, to mark the 150th Anniversary of the Emancipation Proclamation as a milestone to unique American experience, the beginning of the official end of Chattel Slavery in America.

Many American's remain challenged by historic western values to consider the fullness of unconditional love from our divine creator, the hidden force and power who placed sun, moon, planets and stars in the sky as signs and symbols to seek understanding of heavens impact, here on earth, clearly seen in the images throughout the Crocker Art Museum.

The Autumnal Equinox, is one of two times each year when the sun crosses the equator and the day and night are of approximately equal length, showcasing a duality of opposites in a tangible form for everyone to experience, yet hidden from cognition to most, by design.

The first day of Fall 2013, a powerful, profound experience, recreated the power of the Executive Order authored by President Abraham Lincoln, September 22, 1862 and delivered January 1, 1863. The entire text was read aloud in a collective unified voice.

The realized intent to unify the United States of America, symbolized by a man with a biblical name, who found favor in service of the creator of the universe, was seen and felt to all in attendance on a crisp sunny California afternoon.

Ancient methods of observing and recording the positions of the heavenly bodies, mapped the grouping of stars as constellations along the banks of the Hapi River, looking downstream from the Mountains of the Moon, crystal pyramids above the Great Lake Region of Central Africa, over 4,000 miles from today’s man made pyramids… near the Giza Plateau… time itself was first quantified through observation by ancient African women, marking the geographical center of earth’s landmass to calibrate universal order, globally.

Our 1865 Project contribution was unexpectedly cut from the official program, yet the judicious use of our intellectual capital and developed program of guest speakers may provide hope for future opportunity for authentic inclusion of the vast historic and present contributions by people of African ancestry to the California mosaic.

We will continue, against difficult challenges, to honor the legacy of our early California African contributions to the forward flow of humanity, as miners, farmers, ranchers, statesmen and enslaved human chattel in early California, (1840-1865).

Edwin Bryant Crocker, namesake of the Crocker Art Museum, provides an example in his early battles against U.S. slavery, his salient contribution, as well remain unspoken. The heavy lifting establishing the platform for the first California Republican Party Convention, remains cloaked in the same dark silhouettes seen throughout the amazing exhibit, Emancipating the Past, Kara Walker’s Tales of Slavery and Power.

This special Autumn, during the 150th Anniversary of the Emancipation Proclamation, indeed… a new way forward, healing what is hurting our communities is a preexisting condition covered by the Affordable Healthcare Act, viciously opposed by many and we all will continue to pay a heavy price.