Why is Pamela Comstock hating on Flea Markets?

by Santa Cruz Progressive Newswire
At the most recent Santa Cruz City Council meeting on September 10, Pamela Comstock used controversial language once again when describing issues surrounding those members of the community who are less economically privileged. The recently elected council member and co-founder of Take Back Santa Cruz said the use of blankets on which to sell merchandise on Pacific Avenue sidewalks had made the area look like a "flea market." Comstock's comments (see video) were in response to the introduction of proposed amendements to the Santa Cruz municipal code (see PDF below) that if adopted will reduce the locations where individuals may display items for sale on the sidewalk of Pacific Avenue, and will also alter how items may be displayed. After the city council meeting on September 24, it could be illegal to lay a blanket on the sidewalk to sell goods.
Copy the code below to embed this movie into a web page:
Download Video (7.3MB) | Embed Video
"I want sidewalks that are for walking and for perusing. I don't want it to look like a flea market." -- Pamela Comstock

The quote was part of Comstock's personal recollection of visiting the downtown on Labor Day, and feeling that the merchants who were displaying items for sale in front of their businesses during one of the regular sidewalk sales, were being crowded by the street vendors who had also set up on the sidewalk that day.

Yes, Comstock used "jalopy" as an adjective. The word jalopy is a noun for a dilapidated automobile.

Anti-flea market sentiments are symptoms of the local class war, and Comstock has displayed a pattern of making comments attacking the poor. Many individuals in Santa Cruz County love flea markets and see nothing illegitimate or aesthetically deficient about them in any way. There are regular antique fairs held that take over portions of the streets downtown, and likewise health fairs, in addition to the aforementioned sidewalk sales which, if merchants so desire, directly occupy the middle of the sidewalk and divert the natural pedestrian flow.

When the Skyview Flea Market was in jeopardy of being closed down several years ago, it was pointed out that many individuals needed that sales venue to make their living, and to survive in Santa Cruz. The community rallied to save it.

Pacific Avenue is also a location that low income community members rely on to survive.

Comstock would like to see that change. Her philosophy appears to state that if less advantaged community members are run out of the downtown, more "upscale" shoppers will visit, thereby generating increased sales, and increased tax revenue for the city.

"I believe Downtown should be a place of commerce and entertainment," she wrote. "Is it possible that if Downtown were "upscale" we could be a draw for shoppers from all over and in return we would have more money to help solve some of our critical issues?"

Comstock had previously used polarizing, class warfare language at a city council study session in April about ending homelessness, when she stated, "We need to find a way to address the bad behavior that is sending our residents to other cities to shop. How about smart solutions for shoppers? [There are] smart solutions for everything else. Tonight many of the speakers spoke about how to improve the quality of life for the approximately 2700 homeless people. I think it is time to take a broad look at the needs of the entire community. All 60,000 of our residents deserve a better quality of life." (see: https://www.indybay.org/newsitems/2013/05/24/18737320.php )

Comstock's edict that the downtown should be a place of "commerce and entertainment" begs the question, "versus what?"

The downtown is lively and spontaneous, and one of the joys of liberty in Santa Cruz for many, is the existence of free speech zones where the spontaneous and free sharing of ideas includes artists of all economic backgrounds selling their creations.

Comstock's term on the council has seen other attacks on public space by the city, including the first ever night closure/curfew of a beach in Santa Cruz, and the banning of people from traffic medians.

On Facebook, Comstock claimed blankets on the sidewalk were a "tripping hazard."

The updated ordinance was introduced as a public safety issue, with city staff also claiming on at the September 10 council meeting that blankets used to sell goods on the sidewalk of Pacific Avenue were a tripping hazard. No statistical evidence, or even anecdotal evidence, was provided by city staff to confirm or deny this safety risk. This was also the case when the city banned standing on traffic medians, no statistical evidence was given for the change, but the reason for introducing the legislation was stated as "public safety."

When the city adopts new ordinances that reduce our liberties for these reasons without hard evidence a public safety risk is indeed present, a trust between government and the people is broken, and the ordinances are automatically open to suspicion.

There is a variety of easy solutions to the issues brought up.

Eight to ten inch "traffic" style cones could be decorated with artistic embellishments and made available upon request to those wishing to display items on blankets or pieces of cloth. This would be a very inexpensive and aesthetically solution to the perceived tripping problem.

Warning clauses are also badly needed in these ordinances. Citations should only be given on second contact with authorities after an initial warning has been given.

Any amendments adopted should also include clear exemptions written in for musicians who use instrument cases or hats as display devices during performances.

"I just had a quick comment, just about sidewalk space and trying to delay this, and one of the things I wanted to point out is I went to a Labor Day sidewalk sale downtown, and so in addition to the sidewalk sale you had all of the street vendors and it seemed like there were quite a few of them. It was very difficult to navigate. It was way too crowded, and I don't want that for our downtown. I want sidewalks that are for walking and for perusing. I don't want it to look like a flea market, and when you have things, you have a sidewalk sale, you've got a vendor with a table, a vendor with a box, you've got someone with a blanket, it just looks jalopy, and that's not what I want for our downtown."

Comstock's response to critics, posted as a comment in the Facebook group Citizens for a Better Santa Cruz:

"The word I used was jalopy not schlocky..Is that even a word? Anyway, if you are going to attempt to quote me please get it right. I believe Downtown should be a place of commerce and entertainment. It should be safe, clean and festive. I would prefer to see our free spaces downtown occupied by entertainer’s not street merchants with "art" for sale on a blanket. It is a tripping hazard and it is in direct competition with the businesses owners. These are the people who contribute the most to our tax base. We need a strong sales environment so we can fund our community programs. It is so short sighted not to see that homelessness and addiction will not end until the funds are available to pay for housing and treatment for those who need it. Where do you think the money will come from? Is it possible that if Downtown were "upscale" we could be a draw for shoppers from all over and in return we would have more money to help solve some of our critical issues? Have you noticed all the vacancies downtown? Do you think that's a good thing? Why do you think we have trouble attracting new businesses? This group is called "Citizens for a Better Santa Cruz" what part of your post aims to make things better? You may perceive my actions as anti-homeless, anti-transient, anti-whatever but it's my job to vote in a manner that will have a positive impact on the most amount of people. Protecting and growing our sales tax base will reach everyone. Turning Downtown into a free for all flea market will mean less for everyone. BTW Speaking of transparency Petra how about using your real name?"
(From: https://www.facebook.com/groups/463105420413280/permalink/577359125654575/?comment_id=577466305643857&offset=50&total_comments=57 )

The Agenda for the September 24 Santa Cruz City Council meeting is at:
http://sire.cityofsantacruz.com/sirepub/mtgviewer.aspx?meetid=473&doctype=AGENDA 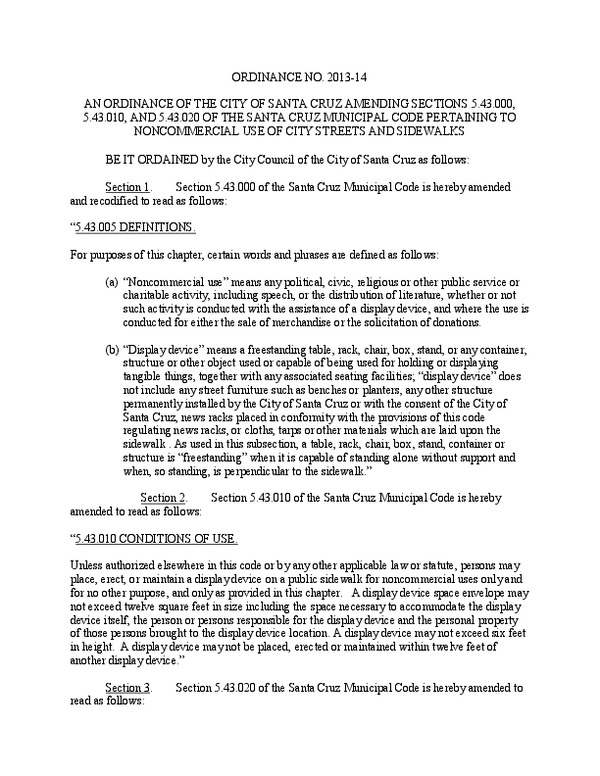 Download PDF (60.8KB)
Add Your Comments
Latest Comments
Listed below are the latest comments about this post.
These comments are submitted anonymously by website visitors.
TITLE
AUTHOR
DATE
Why is Ryan Coonerty's business partner such a jerk-wad[sic]?
Trip Weir
Pacific street, formerly known as the “Pacific Garden Mall”
Razer Ray
Today WILL be a good day!
Razer Ray
...and OF COURSE
Razer Ray
Businesses using Public Necessities
Razer Ray
But you WILL continue to see
Razer Ray
A few more things...
Razer Ray
Nightmare On Walnut Street..
Razer Ray
But you WILL be seeing more of...
Razer Ray
The SCPD will have to certify officers in surveying...
Razer Ray
Support Independent Media
We are 100% volunteer and depend on your participation to sustain our efforts!