Add an Event
Newswire
Calendar
Features
Home
Donate
From the Open-Publishing Calendar
From the Open-Publishing Newswire
Indybay Feature
Publish to Newswire
Add an Event
Related Categories: Santa Cruz Indymedia | U.S. | Drug War | Education & Student Activism
Court Strikes Down Mandatory Drug Testing for All Students
by ACLU
Saturday Sep 14th, 2013 8:39 PM
JEFFERSON CITY, Mo. On September 13, in a class-action lawsuit brought by the ACLU and the ACLU of Eastern Missouri, a federal district court told a Missouri college to end its unconstitutional program of requiring all of its students—irrespective of their course of study—to submit to suspicionless drug-testing.
Jason Williamson, staff attorney at the ACLU's Criminal Law Reform Project, and co-counsel on the case, said:

"Linn State required every incoming student to be tested for drugs, even though many of them would not be engaged in dangerous activities, and the college had no reason to believe any particular student was using drugs. Any student who refused to submit to the drug test—which is considered a search under the Fourth Amendment—would be denied the opportunity to pursue their education at Linn State.

"Students should not be required to sacrifice their constitutional rights in order to further their education, and we're thrilled that the court has struck down the policy. Our victory should serve as a warning to colleges and universities across the country: mandatory, suspicionless drug testing of the entire student body has no place in education.”

Additional information about this case is available at: https://www.aclu.org/criminal-law-reform/minter-et-al-v-claycomb-et-al-complaint

Additional information about the ACLU of Eastern Missouri is available at: http://www.aclu-em.org/

JEFFERSON CITY, Mo. – The American Civil Liberties Union and the ACLU of Eastern Missouri today filed a federal class action lawsuit charging Linn State Technical College with violating the constitutional rights of its students by forcing them to submit to mandatory drug tests as a condition of their enrollment.

A two-year, publicly funded college, Linn State is the first public college in the country to require students, all of whom are at least 18 years old, to submit to mandatory drug testing. The drug-testing policy has been instituted despite there being no documented problems with drugs in the college’s 50-year history, and no reason to suspect that the students being tested have used illegal drugs.

“It is unconstitutional to force students to submit to a drug test when there is zero indication of any kind of criminal activity,” said Jason Williamson, staff attorney with the ACLU Criminal Law Reform Project. “The college has demonstrated no legitimate need to drug test its students that outweighs their constitutionally protected privacy rights. This is an unprecedented policy, and nothing like it has ever been sanctioned by the courts.”

Adopted earlier this month, the policy requires all first-year degree or certificate-seeking students, as well as those students returning to the college after a leave of a semester or more, to pay a $50 nonrefundable fee and submit to testing by the collection and analysis of their urine. Students began to be pulled out of their classes the day after the policy was adopted so they could be tested, and a refusal to submit to the test will result in students being dismissed from the college.

Students whose tests come back positive will have 45 days to take a second test with a negative result in order to avoid being dismissed from the college. Students who fail the second drug test will be dismissed without being refunded the costs of their classes if the dismissal occurs after the normal refund period.

According to the college’s own website, student drug use is no greater an issue at Linn State than it is at any other college.

“This is an invasive policy that requires people to submit to tests that reveal private and intimate things like medical conditions or whether they are pregnant that people have a right to protect,” said Anthony Rothert, legal director of the ACLU of Eastern Missouri. “A person’s privacy should not be invaded like this, especially when they have done nothing wrong.”

Filed in the U.S. District Court for the Western District of Missouri with the assistance of the organization Students for a Sensible Drug Policy, the lawsuit names as defendants Donald M. Claycomb, president of Linn State Technical College, as well as the members of the college’s Board of Regents.

A copy of the lawsuit is available online at: http://www.aclu.org/criminal-law-reform/minter-et-al-v-claycomb-et-al-complaint 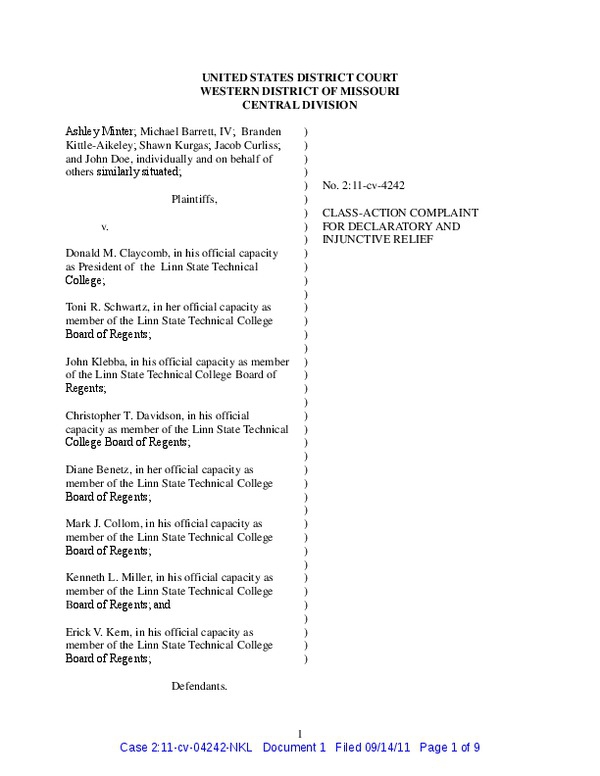 Download PDF (92.9KB)
Minter, et al. v. Claycomb, et al. - Complaint
https://www.aclu.org/criminal-law-reform/minter-et-al-v-claycomb-et-al-complaint
Add Your Comments
Support Independent Media
We are 100% volunteer and depend on your participation to sustain our efforts!