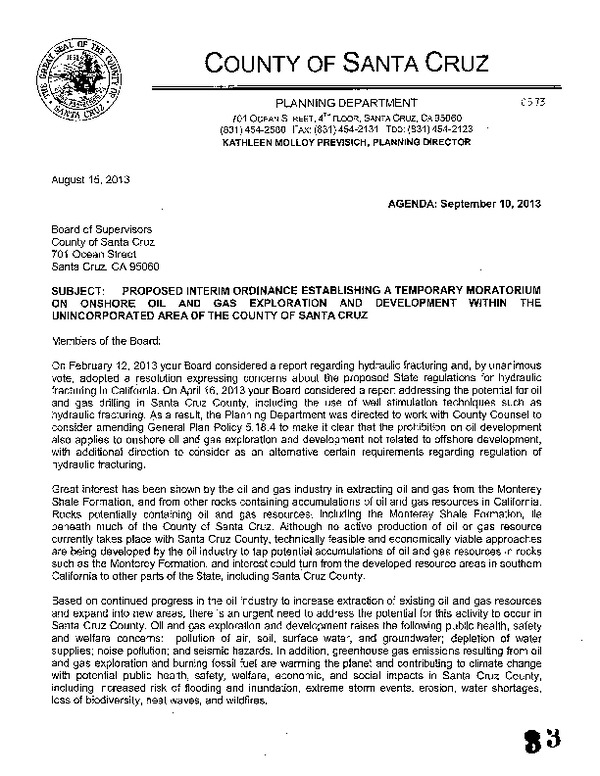 Download PDF (983.9KB)
In February of this year, the board of supervisors first adopted a resolution expressing concern over proposed fracking regulations by the state, and on March 29, the board received a report from the county planning department which addressed the potential for oil and gas drilling in Santa Cruz County, including the use of well stimulation techniques such as hydraulic fracturing.

The planning department wrote in March that hydraulic fracturing in Santa Cruz County was unlikely, due to the strong industry push for fracking in the more lucrative deposit areas of Southern California. However, the report stated that at some point in the future it could not be entirely ruled out locally, saying "technically feasible and economically viable approaches may be discovered by the oil industry to tap the shale oil potential in the Monterey formation, and interest could turn from the developed resource areas in southern California to the Monterey formation in other parts of the State, including in Santa Cruz County."

The planning department was then directed to work with county counsel to consider amending General Plan Policy 5.18.4 to clearly prohibit onshore oil and gas production and to consider the specifics of regulating fracking.

Public comments in the September 10 agenda packet included expressions of concern over the pollution of the local water supply by fracking, including that of personal wells, and at least one member of the public expressed concerns over the possibility of fracking disturbing the stability of fault lines through the county.

Here is a sampling of the comments submitted (See above PDF for more):

Nancy Abbey of Santa Cruz: "Please pass the moratorium. There are clearly many concerns about the process of fracking, so until we have definite answers about the chemicals used, how the vast amount of water needed for fracking would impact our water supply, and what effect the run-off from fracking would have on the quality of our water, we shouldn't allow it in Santa Cruz County."

Sue Reynoldson of Santa Cruz: "Please pass this referendum. I'm sorry I cannot be there to speak, because I have studied both sides of the argument and feel very strongly that the dangers of fracking to our water supply outweigh any possible benefits."

Joy Binah: "By all means, vote on a moratorium on fracking. I am not in favor of this approach to energy due to the chemicals used, the amount of water needed for the process, the impact on our meager water resources, the possibility of disturbing the fault line, the pollution of our groundwater, etc. This in NOT the answer! There are so many other alternatives waiting in the wings!"

Nikki Taylor of Santa Cruz: "We support this moratorium to prevent fracking in Santa Cruz County. It is too great a risk for our meager water supply. We have a well and fear intrusion of chemicals."

Signe Frost of Watsonville: "Please vote to extend the moratorium on any oil investigation or fracking in the waters of our precious ocean. It will only lead to deadly mishaps that will poison our water and our sea life. I know you will vote to protect us!"

Ellen Fitzgerald Murtha: "Board of Supervisors, Thank you for considering a moratorium on fracking in Santa Cruz County. There are too many questions that have not been answered for it to be allowed in our community. Industry refuses to disclose the chemical mixtures used along with the water to frack. What we do know about fracking is frightening. We know it is a terrible waste of our precious water. We know it has a destabilizing impact in an area with known earthquake faults. Thank you for protecting the people and the environment of Santa Cruz."
§March 29 Report from Planning Department
by Santa Cruz Progressive Newswire Wednesday Sep 11th, 2013 10:50 AM 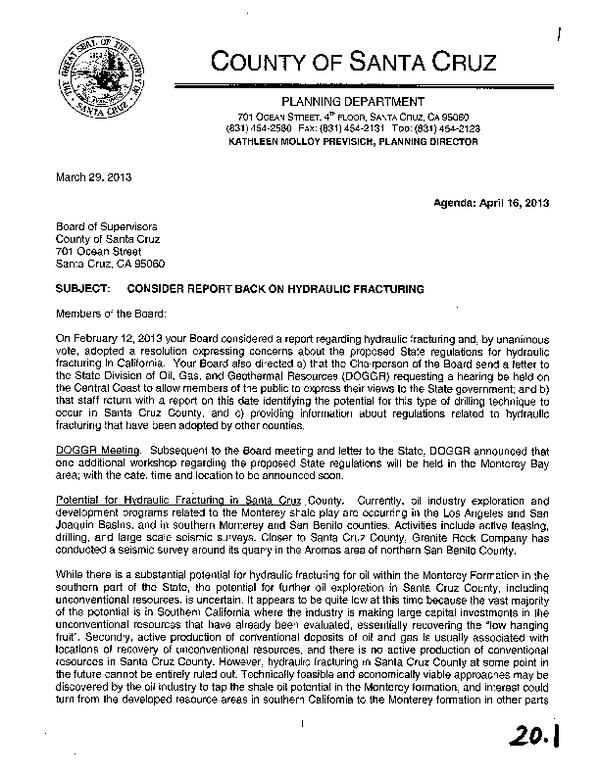 Download PDF (567.5KB)
Add Your Comments
Support Independent Media
We are 100% volunteer and depend on your participation to sustain our efforts!