Add an Event
Newswire
Calendar
Features
Home
Donate
From the Open-Publishing Calendar
From the Open-Publishing Newswire
Indybay Feature
Publish to Newswire
Add an Event
Related Categories: California | Environment & Forest Defense
Historic Vote Moves California Closer to Banning Lead Hunting Ammunition
by Center for Biological Diversity
Monday Sep 9th, 2013 9:44 PM
The California Senate today passed historic legislation to protect the state’s condors, eagles and other wildlife from lead poisoning by requiring the use of nonlead ammunition for all hunting by 2019. Assembly Bill 711 (Rendon) passed by a vote of 23-15; it passed the state Assembly in May. If the bill is signed by the governor, California will be the first state in the country to require the use of nontoxic bullets and shot for all hunting. 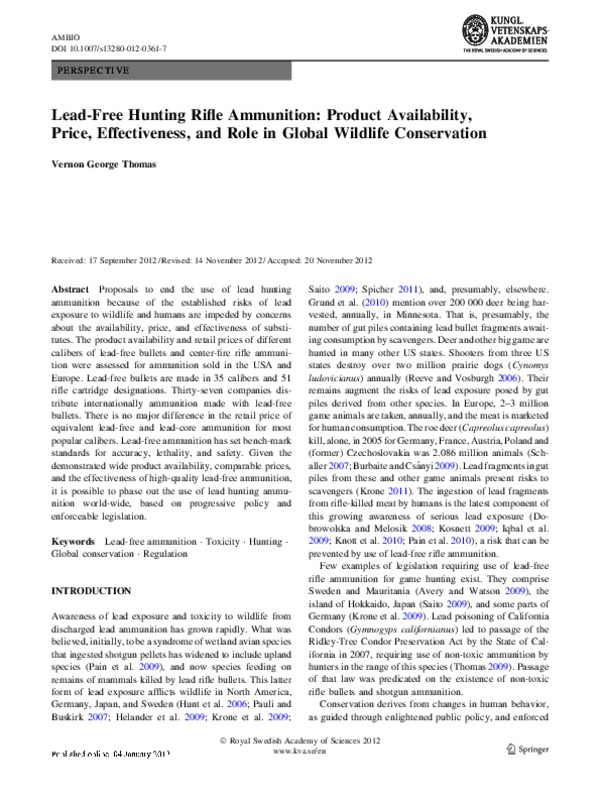 SACRAMENTO, Calif.— The California Senate today passed historic legislation to protect the state’s condors, eagles and other wildlife from lead poisoning by requiring the use of nonlead ammunition for all hunting by 2019. Assembly Bill 711 (Rendon) passed by a vote of 23-15; it passed the state Assembly in May. If the bill is signed by the governor, California will be the first state in the country to require the use of nontoxic bullets and shot for all hunting.

“California is on the verge of a historic step toward protecting people and wildlife from needless lead poisoning,” said Jeff Miller, conservation advocate at the Center for Biological Diversity. “The governor needs to sign this critical legislation. There’s no reason to keep putting toxic lead into the food chain or risking human health when there are nontoxic bullets already on the market and in use by hunters.”

A.B. 711 would require the state Fish and Game Commission to issue regulations by July 1, 2015, that phase in use of nonlead ammunition for hunting of all kinds, including game mammals, game birds, nongame birds and nongame mammals. These requirements would be fully implemented statewide no later than July 1, 2019.

“Lead ammunition is one of the largest unregulated sources of lead knowingly put into the environment in the United States,” said Miller. “We’ve banned lead in gasoline, paint, plumbing, eating utensils, toys, jewelry and even imported candy. Now we can get the lead out for our wildlife.”

Nationwide, millions of nontarget birds and other wildlife are poisoned each year from scavenging carcasses containing lead-bullet fragments, eating lead-poisoned prey, or ingesting spent lead-shot pellets, mistaking them for food or grit. Spent lead ammunition causes lead poisoning in 130 species of birds and animals. Nearly 500 scientific papers document the dangers to wildlife from this lead exposure.

Scientists, doctors and public-health experts from top universities around the country recently called for a phaseout of lead hunting ammunition, citing overwhelming scientific evidence of toxic dangers posed to people and wildlife.

California began phasing out lead hunting ammunition in 2008 to protect critically endangered California condors due to continued lead poisoning in the state’s three reintroduced condor flocks. The Ridley-Tree Condor Preservation Act and state regulations required hunters to use nonlead ammunition for all hunting within the central and Southern California condor range. Those regulations demonstrate that hunters statewide can easily transition to hunting with nontoxic bullets. In fact, there has been no decrease in game tags or hunting in central and Southern California in the five years since those regulations went into effect. Neighboring Arizona has refused to require nontoxic ammunition for hunting, despite an epidemic of lead poisonings and deaths of the Grand Canyon population of endangered condors.

A coalition of 268 organizations from 40 states has petitioned the EPA for nationwide regulations ending the use of toxic lead hunting ammunition. Conservation groups filed suit in 2012 when the EPA refused to act. A federal judge dismissed the case in May on technical grounds but did not rule on the substance of the claim: whether the EPA should regulate lead ammunition under the Toxic Substances Control Act. Conservation groups are considering appealing the ruling.

A national poll (see: http://www.biologicaldiversity.org/news/press_releases/2013/lead-03-18-2013.html) released earlier this year found that 57 percent of Americans support requiring the use of nontoxic bullets for hunting.

Background
Lead is an extremely toxic substance that is dangerous to people and wildlife even at low levels. Lead exposure can cause a range of health effects, from acute poisoning and death to long-term problems such as reduced reproduction, inhibition of growth, and damage to neurological development.

There are numerous commercially available, nontoxic alternatives to lead rifle bullets and shotgun pellets. The U.S. Fish and Wildlife Service prohibited use of lead shot for waterfowl hunting in 1991 and there are more than a dozen approved nonlead shot types. More than three dozen manufacturers market nonlead bullets in 35 calibers and 51 rifle cartridge designations, with superior ballistics, accuracy and safety. A recent study (see PDF) deflates any argument that price and availability of nonlead ammunition preclude switching to nontoxic rounds for hunting; researchers found no major difference in the retail price of equivalent lead-free and lead-core ammunition for most popular calibers.


http://www.biologicaldiversity.org/
Add Your Comments
LATEST COMMENTS ABOUT THIS ARTICLE
Listed below are the latest comments about this post.
These comments are submitted anonymously by website visitors.