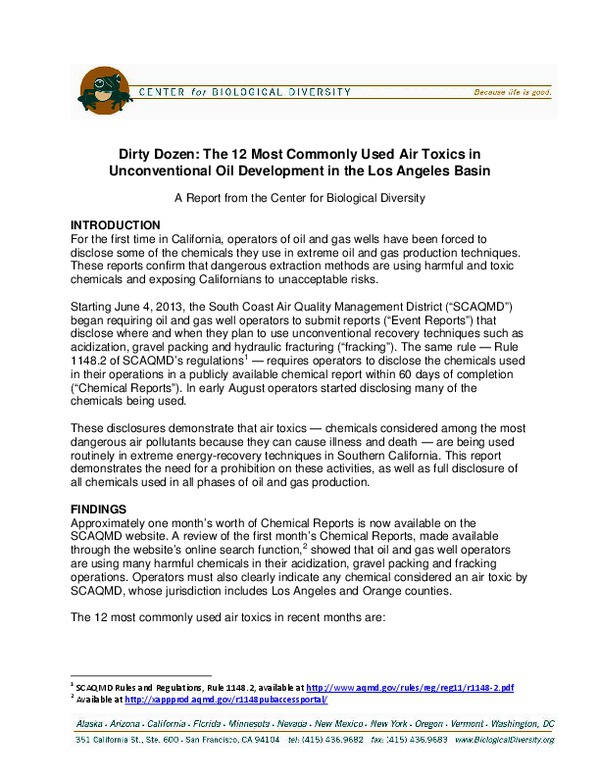 LOS ANGELES— Oil companies have used 12 dangerous “air toxic” chemicals more than 300 times in the Los Angeles Basin in recent months, according to a new report from the Center for Biological Diversity that is already drawing concerned reactions from public health advocates and an L.A. city councilmember. Air toxics are chemicals considered among the most dangerous air pollutants because they can cause illness and death.

The Center’s “Dirty Dozen” report reveals that chemicals that raise cancer risk, harm the heart and damage the lungs and eyes have been used over the summer in fracking, acidization and other unconventional oil production methods in the L.A. area. The report is based on new data from the South Coast Air Quality Management District, which recently began requiring oil and gas well operators to disclose chemicals used in unconventional oil and gas recovery techniques. Despite the new rule, some chemicals used in extreme oil production are not made public because of so-called “trade secrets” claims.

“Every Californian deserves to know that oil companies are pumping dangerous chemicals into our air, but disclosure alone won’t protect our hearts and lungs,” said the Center’s Hollin Kretzmann. “The best way to shield ourselves from this pollution is to halt fracking, acidization and other extreme oil recovery techniques. We need Gov. Brown and state lawmakers to put public health ahead of petroleum industry profits and shut these dirty operations down.”

“We know and understand the terrible health impacts caused by the chemicals used for these extreme oil extraction techniques,” said Angela Johnson Meszaros, general counsel at Physicians for Social Responsibility-Los Angeles. “Dumping highly toxic chemicals in unprecedented amounts into wells in communities is reckless and shortsighted. We must prevent what we cannot cure, and once people have been exposed to these toxics — either through accidental or routine releases — we cannot cure the harm that will result.”

The report found that the most commonly employed air toxics pose a long list of health risks. Crystalline silica, used at least 117 times by oil companies in the L.A. Basin in recent months, can harm the skin, eyes, kidneys, lungs and immune system and is a known human carcinogen. Methanol, used at least 85 times, is a toxic chemical and a known mutagen that can damage the liver, brain and immune system. Hydrochloric acid, used at least 43 times, is an extremely dangerous chemical that can cause severe burns on contact and threatens the eyes and other sensory organs, as well as the respiratory, immune and cardiovascular systems.

“The report confirms our worst fears about the deadly chemicals used in fracking and related activities, including hydrofluoric acid, which can kill people if they’re exposed,” said Julia May, senior scientist with Communities for a Better Environment. “We’ve got to stop this use and transport through our communities and identify all the chemicals still kept secret. We're grateful the Air District adopted the reporting rule — now they need to help us stop the fracking.”

L.A. City Councilmember Paul Koretz, who just co-introduced a motion with Councilmember Mike Bonin calling for a moratorium on fracking and other extreme, unconventional oil and gas extraction processes in Los Angeles, said: “When I was growing up in Los Angeles back in the late ‘50s and ‘60s, there were days my mother wouldn't let me go outside and run. Sometimes I did it anyway, and my eyes and lungs would ache and burn. I've been so proud at how far we've come over the decades in cleaning up L.A.’s air. It upsets me that companies would ignore public health and well-being and threaten to send L.A. back into the dark ages and kids back inside their homes.”

The Dirty Dozen report also shows that oil companies reported the intent to use fracking, acidization and gravel packing — a procedure in which gravel and a chemical mixture are injected into a well — approximately 200 times in the Los Angeles Basin area in June, July and August, with acidization being the most commonly used technique.

“We believe this disturbing new public information highlights the need to halt fracking and other dirty, dangerous oil extraction techniques,” said Paul Ferrazzi, executive director of the L.A.-based Citizens Coalition for a Safe Community. “The communities living adjacent to the Inglewood oil field are seeing clusters of many health-related problems that can be associated with air borne exposures to oil field chemicals and gases.”

Complete information on the 12 most commonly used air toxic chemicals can be found in the Center’s full report.


http://www.biologicaldiversity.org/
Add Your Comments
Support Independent Media
We are 100% volunteer and depend on your participation to sustain our efforts!