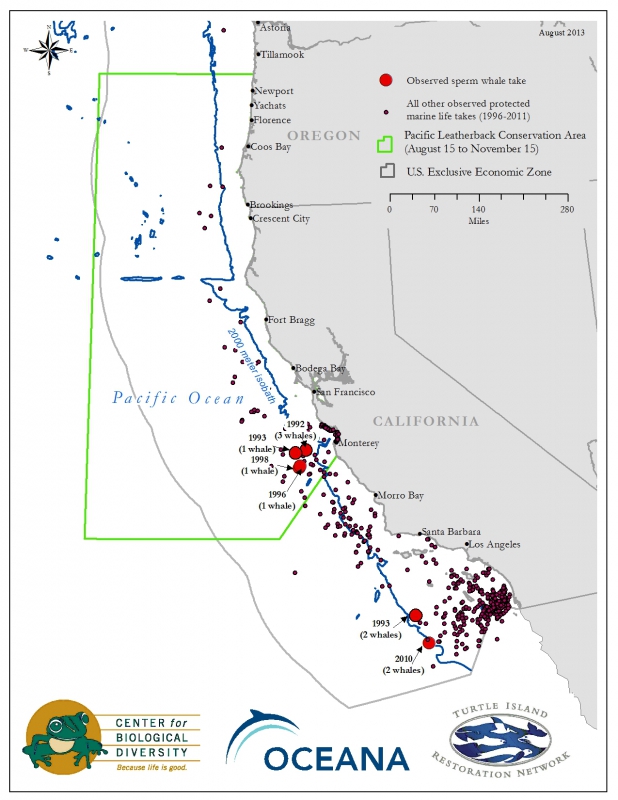 SAN FRANCISCO— The National Marine Fisheries Service issued emergency regulations on September 3 that will shut down California’s drift gillnet fishery if a single endangered sperm whale is caught dead or injured. The rules will also require independent observers on all drift gillnet vessels operating in offshore waters deeper than 6,500 feet (2,000 meters) where sperm whales are most often observed (see attached map). The rules will be enforced by requiring new vessel-monitoring systems tracking the locations of all drift gillnet vessels off the U.S. West Coast.

The fishery kills more whales and other marine mammals than any other fishery along the West Coast and has one of the highest bycatch rates in the country. California's drift gillnet fishery targets swordfish and thresher sharks.

“Gillnets are deadly for endangered sperm whales, so these emergency rules give them at least some protection this year," said Catherine Kilduff, with the Center for Biological Diversity. “But whales are only the tip of the iceberg when it comes to the deadly toll California's drift gillnets take on other sea animals. We need long-term measures to reform this fishery before it's too late.”

Two endangered sperm whales were observed entangled (one dead and the other seriously injured) in a drift gillnet fishing net in October 2010. The incident prompted federal fisheries regulators to deny a marine mammal “take” permit for the fishery without measures to reduce the risk of whale entanglements in the future.

Drift gillnet fishing involves setting out mile-long nets at dusk that drift freely where fish, sharks, turtles and marine mammals feed or migrate during the night. On average this California fishery — which operates primarily between Aug. 15 and Jan. 31 — catches and discards more than 100 protected whales, dolphins, seals and sea lions each year, according to the National Oceanic and Atmospheric Administration.

Recent fishery observer data indicates that for every two swordfish the fishery catches to sell, on average one blue shark, 15 ocean sunfish, and a long list of other fish are thrown overboard dead or injured.

The legal impetus for the emergency rules arose because the government is not allowed to issue incidental take permits to a fishery whose take of marine mammals exceeds “potential biological removal level” (the maximum number of deaths that the population can sustain and still recover). The most recent sperm whale stock assessment by the Fisheries Service stated that on average more than three endangered sperm whales are killed every year by the fishery — more than twice the PBR level of 1.5 annual sperm whale “takes.”

Last week the agency also finalized its uplisting of the California drift gillnet fishery to “Category 1” status under the Marine Mammal Protection Act, a designation for those with “frequent” incidents of death and injuries to marine mammals. The only other Category 1 fishery in the U.S. Pacific is the Hawaii tuna longline fishery. Oregon and Washington have already banned their fishing vessels from landing swordfish caught by drift gillnets, leaving California as the last remaining state on the West Coast allowing this destructive fishing gear.

Sperm whales have been protected under the Endangered Species Act since 1970. The California-Oregon-Washington stock is found year-round in California waters and reaches peak density between April and mid-June and from the end of August through mid-November. In Washington and Oregon, the animals have been seen in every season except winter. Deep divers known to prey on the elusive giant squid, female sperm whales grow to 36 feet and 15 tons, while males reach 52 feet and weigh as much as 45 tons. Sperm whales have the largest brains of any animal, and newborn calves are about 13 feet long.

“While these new measures are supposed to prevent whale deaths in the short term, the real fix is to phase out this obsolete and wasteful fishery once and for all,” said Teri Shore, program director at Turtle Island Restoration Network (http://www.SeaTurtles.org), which today published a new online exposé calling for a end to the gillnet fishery, titled California's Deadliest Catch. “The new regulations do nothing to stop the killing of more than 100 dolphins, sea lions and other marine animals every year. It's time to end this waste of ocean life.”

The Center for Biological Diversity, Oceana and Turtle Island Restoration Network requested emergency regulations and filed a notice of intent to sue the federal government under the Endangered Species Act in September 2012 because of the alarming killing and injury of sperm whales — as well as other new information that suggested the government was overlooking the fishery’s impact on endangered species. Conservation groups’ efforts in prior years have forced the fishery to implement closed areas to protect loggerhead and leatherback sea turtles. Today’s regulations will help enforce these closed areas by monitoring all fishing vessel locations.

The Center for Biological Diversity is a national, nonprofit conservation organization with more than 625,000 members and online activists dedicated to the protection of endangered species and wild places. http://www.biologicaldiversity.org

Oceana is the largest international advocacy group working solely to protect the world’s oceans. Oceana wins policy victories for the oceans using science-based campaigns. Since 2001, we have protected over 1.2 million square miles of ocean and innumerable sea turtles, sharks, dolphins and other sea creatures. More than 550,000 supporters have already joined Oceana. Global in scope, Oceana has offices in North, South and Central America and Europe. http://www.oceana.org

Turtle Island Restoration Network (SeaTurtles.org) is a small but effective international marine conservation organization headquartered in California whose 60,000 members and online activists work to protect marine biodiversity in the United States and around the world.