Add an Event
Newswire
Calendar
Features
Home
Donate
From the Open-Publishing Calendar
From the Open-Publishing Newswire
Indybay Feature
Publish to Newswire
Add an Event
Related Categories: California | International | Santa Cruz Indymedia | U.S. | Global Justice & Anti-Capitalism | Police State & Prisons
Commander X Quits Cyber-activism; Leaves Anonymous, PLF
by Alex Darocy (alex [at] alexdarocy.com)
Saturday Aug 31st, 2013 8:49 PM
On Tuesday, Commander X (also known as Chris Doyon), announced he has "permanently and completely" retired from cyber-activism, which includes all activities in the Peoples Liberation Front and Anonymous. "I have removed my mask from the wall of my office. I am an Anon no longer," Doyon said in an August 27 "farewell" statement in which he cited exhaustion as the reason. [Photo: Commander X shortly after setting up his space on the first night of sleep during Occupy Santa Cruz on October 6, 2011] 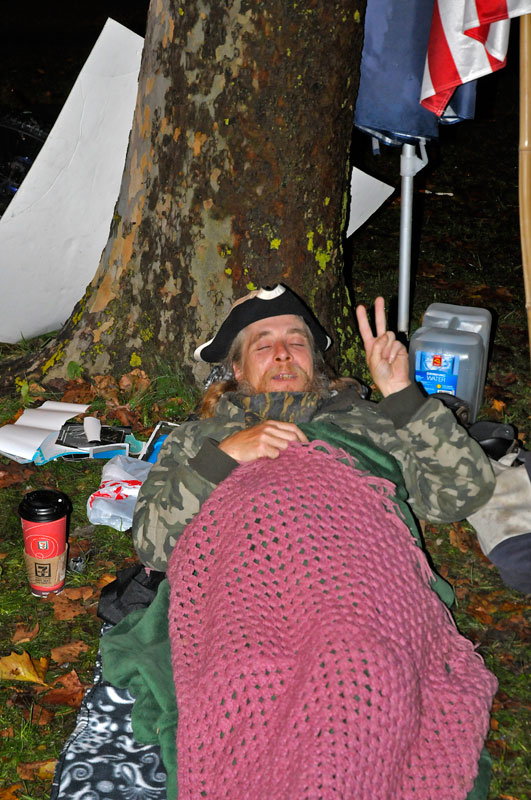 In Santa Cruz, "X" was well know for his participation in PeaceCamp2010 and Occupy Santa Cruz, where on October 6, 2011 he was the first person to set up bedding and lie down on the first night of sleep in San Lorenzo Park. He became a mentor figure to activists during the two month occupation, and he shared his knowledge about a wide range of contemporary actions with many.

In February of 2012 Doyon released a statement saying he had left the United States to escape the federal charges against him for hacking. He now says he is becoming established in Canada, and beyond professional pursuits, he intends to continue amateur research into the field of autonomous robotics and artificial intelligence, which were passions for him before he began to devote most of his time to political activism.

I have been an activist for 30 years. My entire life has been dedicated to fighting for justice and freedom, for both human and animal rights. For 28 of those years I have been what some call a "hactivist", and in the past 5 years I have been a part of the amazing idea called Anonymous. In fact, during these past 5 years I have dedicated an average of 10 hours a day to cyber-activism within the context of the PLF and Anonymous. In the course of these events, the persona of "Commander X" has developed and expanded to almost mythic proportions. In a sense the "Commander X" persona has become a bit like BatMan, a sort of cyber-super hero. But like BatMan, the impossible persona of "Commander X" rests upon the shoulders of a simple man. And like all men, I have frailties, weaknesses - and limits.

In the past few years, in order to support this "Commmander X" persona I have sacrificed my family, my freedom, my home - and even my country. I will never regain these, I will die as a man without a family or country. I will die alone in a foreign land, my ashes spread across a foreign forest. I have no regrets in this regard, "Commander X" made a difference - he saved lives and inspired thousands to join this critical fight for the very soul of humanity.

But in addition to the sacrifices named above, the past few years of endless work on the PLF and Anonymous have thoroughly wrecked my health, physical, psychological - and spiritual. "Commander X" may be invincible, but I am extremely ill from the exhaustion and stress of fighting in this epic global cyber war. I always believed I would have the strength to fight until the bitter end. I do not. I can not go on, and as of this moment I permanently and completely retire from cyber-activism, the Peoples Liberation Front - and Anonymous. I have removed my mask from the wall of my office. I am an Anon no longer.

The majority of things that I have sacrificed in order to bear the persona of "Commander X" are lost to me forever. I can never endanger my family by contacting them, and I can never return to the USA. But there is one thing, one delight of my past life that I thought lost to me forever that I can recover.

Many years ago, long before the eruption of this global cyber-war - I was an amateur scientist in the field of Machine Life (autonomous robotics) and AI (artificial intelligence). For five or so years I had a lab in my basement filled with dozens of robots ranging from those the size of a large spider to bipeds two foot tall. As for AI, there is nothing like the thrill of writing code that is capable of learning, code that can literally rewrite itself. Code that can think, respond intelligently - even create. Those years were the happiest and most intellectually fulfilling of my life.

Lately, here in Canada - I have been picking up some small and discrete web design and network security jobs. I have managed to be able to rent a spare, small and very plain office and furnish it with simple things like a microwave and coffee maker. It is in this space that I intend to take up once again my amateur research into the field of autonomous robotics and artificial intelligence and rebuild my laboratory. The field has progressed much since I was drawn away from it into the great global cyber-war, and I look forward to all the catching up I have to do! In addition, I will re-establish the Machine Life & Artificial Intelligence Foundation which I founded so long ago as a repository for my research. For those few true friends I have out there in the movement for whom these things are interesting, I have established a new personal Twitter account @M0RPHE0US where I will tweet about things related to this field. But PLEASE, no politics or activism. These things are finished for me.

Commander X will now step off the stage of history, and fade into the mists of myth and legend. Hopefully his sordid and exciting story will inspire others to take up the fight for justice and freedom. As for the tiny simple man upon whose shoulders he rested, he will now spend his days in sheer delight watching the antics of his little robots, and his nights talking to computer programs that can think and dream.

For many years I followed the Grateful Dead. I attended over 400 concerts spanning ten years. Many band members died and were replaced, and it seemed that the Dead were more of an institution than a band. I could never imagine a day when they would no longer tour the country bringing joy and enlightenment to millions each year. But within the band, over it's 35 year history - a subtle process was taking place that would eventually lead to it's demise. While they were a team, slowly but surely the creative and administrative responsibilities of the band shifted to one individual - Jerry Garcia. And thus he became irreplaceable, and on the day he died the Grateful Dead ceased to exist.

The analogy to the Peoples Liberation Front is apt indeed. In the beginning back in the 80's, the PLF was a team effort. Everyone could do everyone else's job. But over the past 28 years, and most extremely in the past four years - the burden of both administration and creativity of the Peoples Liberation Front has shifted onto my shoulders. This has become so extreme that I was unable even to take a brief vacation without the PLF simply grinding to a halt.

Many rock bands chose to fight on to the bitter end, when once they could fill stadiums - they content themselves to devolve and become club bands. The Grateful Dead chose to quit while they were at their peak and thus become legend, rather than to slowly whither away and become a joke. I make this same choice now for the Peoples Liberation Front.

In our 28 year history, we fought everything from apartheid in South Africa and CIA recruitment on college campuses to brutal dictators in the mid-east and Africa. In the past few years we watched the meteoric rise of Anonymous, and proudly helped to shape what that amazing movement has become today. Everyone who was ever a member of the PLF has great reason to be proud. We made a difference. We made history.

http://pastebin.com/ihVDTFLJ
Add Your Comments
LATEST COMMENTS ABOUT THIS ARTICLE
Listed below are the latest comments about this post.
These comments are submitted anonymously by website visitors.