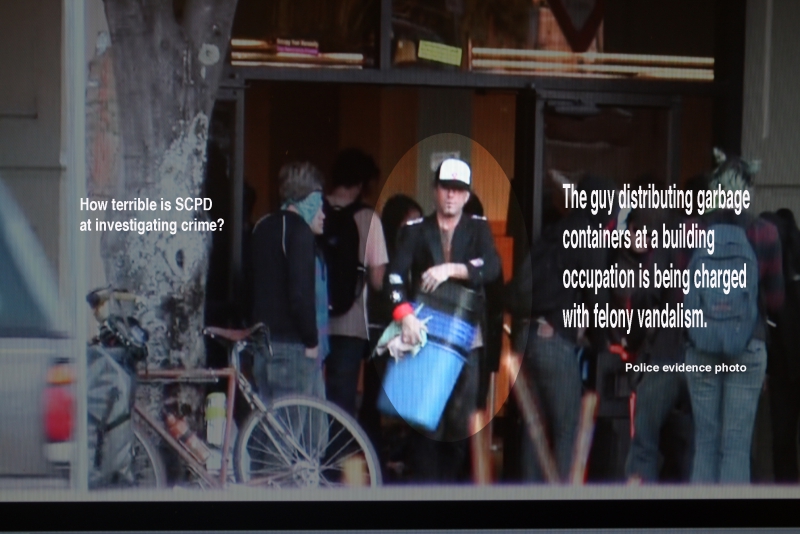 original image (2816x1880)
I was in court on August 16 and 28th for a “Status Conference.” I’m facing Felony Vandalism and Misdemeanor Trespassing charges filed by DA Bob Lee based on “evidence” collected by SCPD. This is from the occupation of a long vacant bank building at 75 River St. in late 2011. The building is owned by local mega-developer Barry Swenson and leased for many years by the bank across the street, Wells Fargo.

There had been more than 300 people who crossed the threshold of the building in the course of the 3 day occupation and eventually 11 people would be charged with 2 separate felonies and 2 discrete trespassing charges. Finally, 7/11 had all of their charges dropped based either on assertions that they were there as journalists or they hadn’t returned to the building after being warned of the trespass.

Now, nearly 2 years later and after several judge changes, a new assistant DA has been appointed. I believe his name is Greg Peinado. We’re still hanging tough. There has been a plea offer made to us but we’re not budging. Why would I plead guilty for shit I didn’t do? I was there on principle in the first place so I’m not about to take the easy path out just because I’m fearing jail time.

Aug. 16. The Assistant District Attorney had indicated that 2 police witnesses had schedule conflicts with the pending trial date. Then attorney Alexis Briggs also said her pregnancy might cause a conflict. Then two other attorneys including Lisa McCamey who is my court appointed defender told the judge that other cases they are working on posed a schedule conflict.

Judge Burdick asked the ADA if the “people” thought it necessary to go forward with the cases given the profound expense it would cost considering that the damage amount is only $20,000. Peinado stated that the “community” he is hearing from does want to see a jury trial. The Status Conference was rescheduled to Aug. 28 to assess scheduling conflicts.

Aug. 28. Attorney for Cameron Laurendau, Alexis Briggs confirmed that her pregnancy will create a conflict with the scheduled jury trial. Judge Burdick rescheduled a new trial for March 3rd 2014 with a “readiness” hearing on Feb. 27.

Then Ass. DA Peinado stated that Gabriella Ripley-Phipps would have to reinstate her bail bond as the current one had elapsed. When charges were filed last year, and several of the Santa Cruz Eleven had been arrested in their homes, Ripley-Phipps was told by her attorney to take out a bail bond. I (Brent Adams) simply turned myself in to the sheriff’s department. Judge Burdick then asked if Ms. Ripley-Phipps is a danger to the community or a flight risk. Peinado stated that she had been arrested at Occupy Oakland following her arrest in Santa Cruz last year and that indicates that she is a “danger to her community.” Burdick agreed and stated that Ripley-Phipps must now repost a bail bond.

There were a large group of friends in court supporting Gabriella and Brent also had a supporter with him. Angel Alcantar and Cameron Laurendau were both not present in court today.
http://66.147.242.176/~santacv5/santacruze...
§Gabriella Ripley-Phipps Bail bond hearing
by Brent Adams Wednesday Aug 28th, 2013 4:40 PM
Ms. Ripley-Phipps' bail bond issue will be heard on September 3, 2013 8:15am
Add Your Comments
LATEST COMMENTS ABOUT THIS ARTICLE
Listed below are the latest comments about this post.
These comments are submitted anonymously by website visitors.