Add an Event
Newswire
Calendar
Features
Home
Donate
From the Open-Publishing Calendar
From the Open-Publishing Newswire
Indybay Feature
Publish to Newswire
Add an Event
Related Categories: International | San Francisco | Arts + Action | Immigrant Rights
SF Immigrant Film Festival Call for Entries 2013
by TW (sfimfilmfestival [at] gmail.com )
Monday Aug 19th, 2013 10:30 PM
Refugees, immigrants and exiles find their own voice in this event. Works in Narrative, Animated, and Documentary Short, regardless of the original production format, and the date when it was completed, are considered. Submissions for the longest-running film festival on issues surrounding immigration, should be not longer than 30 minutes. 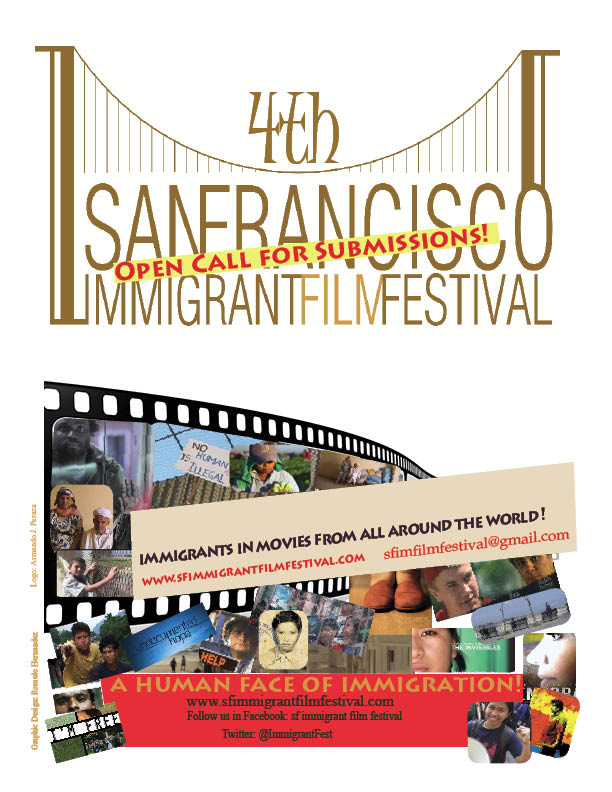 The San Francisco Immigrant Film Festival has issued a call for entries for its next edition, to be held in San Francisco, California in December 2013.

Works in Narrative, Animated, and Documentary Short, regardless of the original production format, and the date when it was completed, are considered for this fourth edition. Submissions should be not longer than 30 minutes.

This film festival is exclusively focused on issues surrounding immigration, refugees and exiles. Throughout the year, SFImFF offer free screenings of films/videos at different venues related to immigrant communities and college students to promote a greater understanding of the human condition. The entry deadline for the next edition is October 31, 2013.

This is a completely volunteer-run festival, whose mission is to expose a human face on the issues of immigration, and immigrant workers' rights through the exhibition of films/videos that document the lives of immigrants and exiles, the facts that motivate people to migrate, and the problems most people face in the process to migrate to other country.