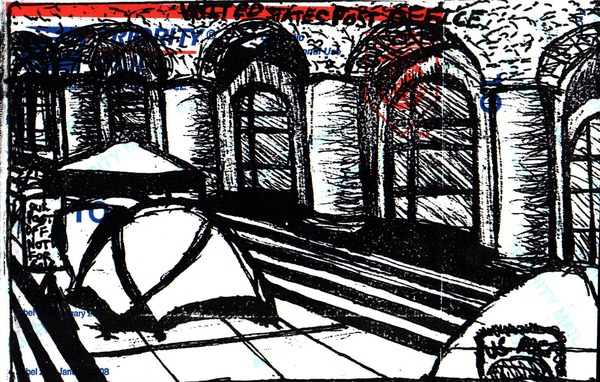 Download PDF (10.0MB)
On saturday 8/17/2013 at 9:00pm a bicycle police office arrived at the occupation of the Berkeley Post Office announcing to the occupiers that they had one hour to leave the federal post office located at Milvia and Alston in downtown Berkeley. This announcement confirms that Berkeley PD has reversed their original plans to out of federal jurisdiction and stay off 'federal land' (Indian Country).

The Berkeley Post office has been occupied in a resistance to the the United States Postal Service (USPS) entering in a contract to sell 56 post who faced a number of proposals to reduce their billions of dollars in deficit. The Government has signed a contract with the worlds largest commercial restate firm CB Richard Ellis group (now called CBRE group, inc) who will be responsible for handling the resale and negotiating the new leases. This is very alarming considering CBRE group is headed by one of the lead University of California Regents Richard Blum.

We suspect the recent activity of Berkeley PD is a result of the growing concern for the sudden arrival of UC Berkeley students who may be considered a lighting rod for national political action. Particular alarming is Blum's connection to the US Government as the husband of Dianne Feinstein who represents the state of California in the U.S. Senate.

Please bring yourself and tell your people to defend the Berkeley Post Office located at Milvia and Alston in Downtown Berkeley and share this alarming scandal.

For more information on the selling of our national post offices please read further at: http://www.snopes.com/politics/business/blum.asp
Add Your Comments
LATEST COMMENTS ABOUT THIS ARTICLE
Listed below are the latest comments about this post.
These comments are submitted anonymously by website visitors.