Add an Event
Newswire
Calendar
Features
Home
Donate
From the Open-Publishing Calendar
From the Open-Publishing Newswire
Indybay Feature
Publish to Newswire
Add an Event
Related Categories: California | Central Valley | Environment & Forest Defense | Government & Elections
Order against Trinity River high flows extended through August 21
by Dan Bacher
Thursday Aug 15th, 2013 10:38 AM
“Central Valley water users have made untold billions of dollars at the expense of Trinity River salmon and communities. The greed and aggression represented by this lawsuit and the hypocrisy of the plaintiff’s exploitation of environmental protection laws both stuns and saddens us,” said Hoopa Valley Tribal Chairwoman Danielle Vigil-Masten. 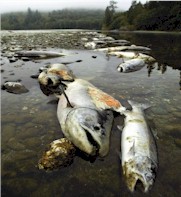 A federal judge in Fresno extended a controversial temporary restraining order to block a federal plan to increase water releases down the Trinity River, intended to avert a fish kill on the Klamath, through at least August 21.

Lawrence J. O’Neill, United States District Judge, put the burden of proof on the federal government in showing how the releases are needed - and set a hearing by the parties on August 21.

The Westlands Water District and San Luis and Delta-Mendota Water Authority filed the lawsuit against the Bureau of Reclamation alleging that the increased releases would cut water to west side San Joaquin Valley growers, resulting in "significant and irreparable harm."

The Bureau and two intervenors - the Hoopa Valley Tribe and the Pacific Coast Federation of Fishermen's Associations (PCFFA) - say the flows are necessary to prevent a fish kill like the one of September 2002, when over 78,000 salmon perished in the lower Klamath due to a disease outbreak spurred by low, warm water conditions. The fish kill resulted in severely limited Tribal and commercial fishing seasons.

"Both sides of this dispute represent significant public interests," wrote O'Neill. "Federal Defendants and Defendant Intervenors correctly point out that the federal government has invested large sums of money into the restoration of the fisheries in question. Yet, it is equally true that the government has and continues to invest in the long-term viability of agriculture in the Central Valley. Neither side holds veto power over the other.

"The Court finds that Plaintiffs have demonstrated a likelihood of success on the merits and the probability of irreparable harm that is not clearly outweighed by the equities on the other side. Accordingly, the TRO currently in force is extended..." concluded O'Neill.

On the day water releases began, the Hoopa Valley Tribe decried the court-ordered shut off of water - and followed up with a press release slamming the Westlands lawsuit on Wednesday. The Trinity River, the Klamath's largest tributary, flows through the Hoopa Valley Reservation in Humboldt County.

Scientists, federal officials and tribal leaders all say the water is needed now. But after issuing an order blocking the flow release until August 16, Judge O’Neill extended the order until at least August 21, according to the statement from the Tribe.

Hoopa Valley Tribal Chairwoman Danielle Vigil-Masten said, "I have received a Temporary Restraining Order (TRO) issued by Judge Lawrence J. O' Neill that has an adverse effect on the scheduled release of Trinity River water to advert a Klamath fish kill. This TRO contradicts almost 60 years of laws pertaining to the diversion of the Trinity River, which put the Hoopa Valley Tribal water rights and the Trinity fishery over the needs of Central Valley irrigators."

The Tribe said they hope once the judge has the opportunity to review the scientific documents and history of the Trinity River diversions, he will lift the restraining order. They warn another catastrophic fish die off "will have political ramifications that could potentially hurt both the Bay Delta Conservation Plan and Klamath River Basin water talks."

At issue is the recent decision from the Department of Interior to release 62,000 acre feet of water from Trinity River reservoirs over the next six weeks to supplement low flows in the Klamath River to avoid a Klamath fish kill. "This action is overwhelming supported by the public, Tribes, fishermen, and the scientific community, who claim similar actions in prior years were effective in avoiding fisheries disasters," according to the Tribe.

The Tribe emphasized that the TRO was issued despite the federal government’s briefings that stated, “Granting an injunction would result in immediate and irreparable injury to the public’s interest, including a significant risk of harm to fall-run salmon in the Klamath and Trinity River and, of special concern, the frustration of the government’s trust responsibility to the Hoopa Valley and Yurok Tribes to restore their fisheries.”

Along with supporting the government’s temporary actions to avert a fish kill, the Hoopa Valley Tribe is asking for "long term solutions to the crisis in the Klamath and Trinity Rivers that reflect that most irrigators receiving water from the Klamath Basin are junior water right holders."

They say proposals such as Governor Jerry's Brown's Bay Delta Conservation Plan to build the peripheral tunnels and the Klamath Basin Restoration Agreements would "actually take more water from the Klamath and Trinity Rivers, and elevate junior water right holders over Tribes."

Not only would construction of the peripheral tunnels hasten the extinction of Central Valley salmon and steelhead, Delta and longfin smelt, green sturgeon and other fish species, but it would imperil salmon and steelhead runs on the Trinity and Klamath rivers.

“Central Valley water users have made untold billions of dollars at the expense of Trinity River salmon and communities. The greed and aggression represented by this lawsuit and the hypocrisy of the plaintiff’s exploitation of environmental protection laws both stuns and saddens us,” said Vigil Masten.

“But make no mistake,” she said. “If the injunction remains, then the Central Valley contractors’ attack on us, on who we are, on what we stand for, could launch a war for the Trinity that could engulf California from the Bay Delta Conservation Planning process to Klamath River Basin water settlement negotiations.”
Add Your Comments
Support Independent Media
We are 100% volunteer and depend on your participation to sustain our efforts!