Add an Event
Newswire
Calendar
Features
Home
Donate
From the Open-Publishing Calendar
From the Open-Publishing Newswire
Indybay Feature
Publish to Newswire
Add an Event
Related Categories: East Bay | Environment & Forest Defense
Hundreds Arrested at Sit-In, Thousands March on Chevron in Richmond, CA
by Ryan Rising
Sunday Aug 4th, 2013 7:40 PM
Saturday, August 3, 2013 - 2,000 people marched in Richmond, California and over 200 people were arrested at a sit-in at the gate of Chevron's refinery. The marchers painted a large sunflower on the street in front of the gate, symbolic of the need to bioremediate the toxic pollution put out by the oil refinery. Bioremediation is a process of using biological organism, such as plants, to break down toxins and remove pollutants, such as those in soil and water. Some folks planted sunflower starts in the soil that surrounds the Chevron plant and others cast seed bombs into the petroleum company's landscaping. 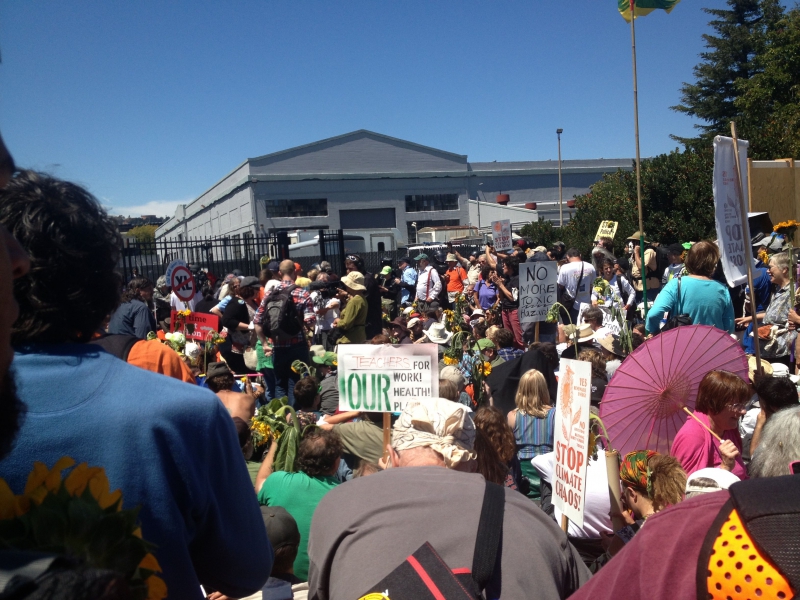 Over 2,000 people marched in Richmond, California and over 200 people were arrested at a sit-in at the gate of Chevron's refinery. People rallied at the Richmond BART station starting at 10 a.m. as groups came in from various BART stations around the Bay area to join the march. Organized by a coalition of many environmental and social justice groups as well as unions, and joined by many activists, families, and other folks, the San Francisco Bay Area marched through the city of Richmond to the Chevron refinery to stage an act of civil-disobedience.

The march arrived at the gate of the Chevron Richmond Refinery at Castro Street and Redwood Way, one entrance to a 2,900 acre property, directly across from the 580 offramp. A large truck had a sound system set up on its bed for people to speak to the crowd from. Speakers addressed the toxic pollution of Chevron locally as well as their role in the petroleum industry's latests ecological disasters such as the tar sands, in which large areas of sands and sandstone are mined for their unconventional petroleum deposits, and the Keystone XL Pipeline, a pipeline project being built from Alberta to Texas in order to transport oil from tar sands projects in Canada to the United States.

One speaker invoked each person in the crowd to ask themselves, "Do I have any good reason to not get arrested today?" People were then instructed to come behind the sound truck to a specific area where they received legal advice and support. A second, smaller march then formed, lead by Richmond residents. This group of a few hundred marched forward toward the riot police line that stood guard in front of the entrance to Chevron's oil refinery. Moving past a red line of flags that had been placed on the ground by authorities, the group came face to face with the riot police line. Riot police retreated a few feet as the marchers began to sit down in front of the gate in an act of civil disobedience.

The act could be described as a blockade, in addition to a sit in, and if used at each entrance to the plant, could effectively shut down the operations of the oil refinery for some time. In the 1980s, thousands of people from the Bay Area would get arrested blockading nuclear arms development laboratories by continuously sending group after group of people to sit in the road leading to the nuclear lab in order to blockade the entrance. With only a little over 200 people getting arrested on August 3d in Richmond, arresting and processing took several hours and did shut down the entrance to the refinery, as well as the freeway on and off ramp across from it, for half of the day.

Meanwhile, other folks took it upon themselves to plant sunflowers amongst the landscaping that surrounds the Chevron refinery. Some were careful to plant their seedling or ball of seeds into the soil, as others cast their seed bombs from afar onto the small amount of unpaved earth between the Chevron plant and its parking lot and the street. Seed bombs are small balls of organic materials that contains seeds. In this case the balls of clay and compost were about 1/2 inch in diameter and contained sunflower seeds. To make seed balls, one simply combines compost, clay, water and any seeds of choice, balls the mixture up, and sets the balls out on a hard surface to dry. Once dried, seed balls can be thrown from afar into any landscape where rain will open them up and water will germinate the seeds.

Sunflowers can be used in bioremediation to take up lead from the soil. Each crop of sunflowers pulls more lead out of the soil and these harvested sunflowers are then treated as toxic waste, removed from the site along with the now contained lead contamination. Other plants, mushrooms, and bacteria can be used to take up other heavy metals like arsenic and mercury, or to break down chemicals like pesticides and diesel fuel. Certain strains of Oyster mushrooms, a nutritious and tasty edible mushroom, have been found to be capable of breaking down hydrocarbon bonds that make up petroleum. Some species of fungus, such as Pestalotiopsis microspora, have even been found capable of breaking down plastics.

Last year, on August 6, 2012, a major fire started at the Chevron refinery, sending clouds of toxic smoke into the air around Richmond and the greater Bay Area. Since then, many people from Richmond have complained of smoke inhalation, runny nose, coughing, and asthma-like symptoms due to the fire. The fire started from a pipeline rupture and sent a fireball into the sky, creating a plume of smoke that lingered for days around the city. More than 15,000 people visited hospitals with complaints of respiratory problems in the hours and days following the explosion. A lawsuit was filed August 1, 2013, two days before the march, claiming that Chevron "sacrificed safety over profits." The lawsuit cites 14 similar incidents since 1989 that the Chevron petroleum refinery is responsible for.

On Saturday, August 17th, from 11a.m. to 2p.m., the coalition that organized the action will meet at the Berkeley Fellowship of Unitarian Universalists at 1924 Cedar Street @ Bonita in Berkeley, CA. The action was called by the Bay Area Sumer Heat Coalition and includes the Keystone Action Council, Idle No More, Communities for a Better Environment, and 350 Bay Area, as well as many other organizations and individuals. There will be a protest on the one-year anniversary of the explosion on August 6th at 6:00pm at Richmond Civic Center Plaza.

There are also local meetings and events coming up that can be found at 350BayArea.org/events and you can organize your own! Get in touch with some of the existing organizations for advice on how to organize an affinity group, take part in upcoming actions, or create something new.

Monday, August 9th, there will be another non-violent direct action and mass education at the Canadian Consulate from 8am - 1pm.
http://www.350BayArea.org
§Marching Toward Police Line At Chevron Richmond Refinery
by Ryan Rising Sunday Aug 4th, 2013 7:40 PM 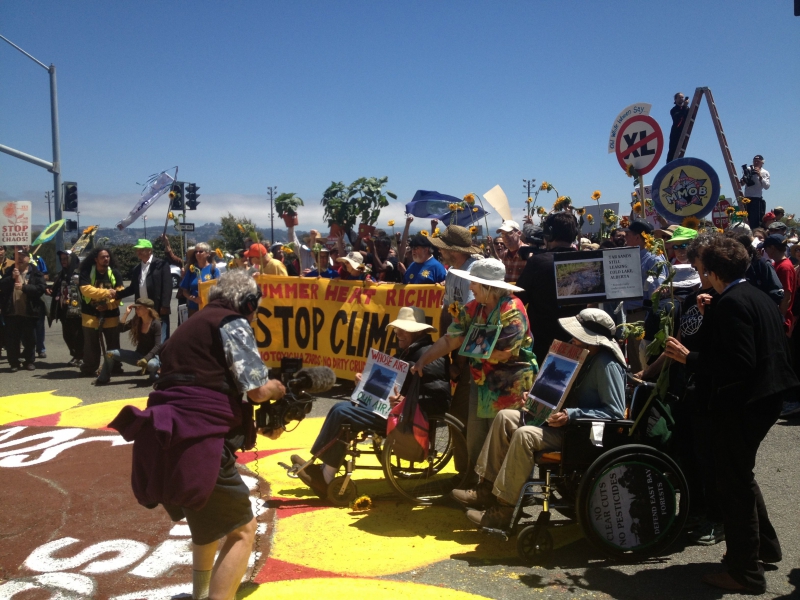 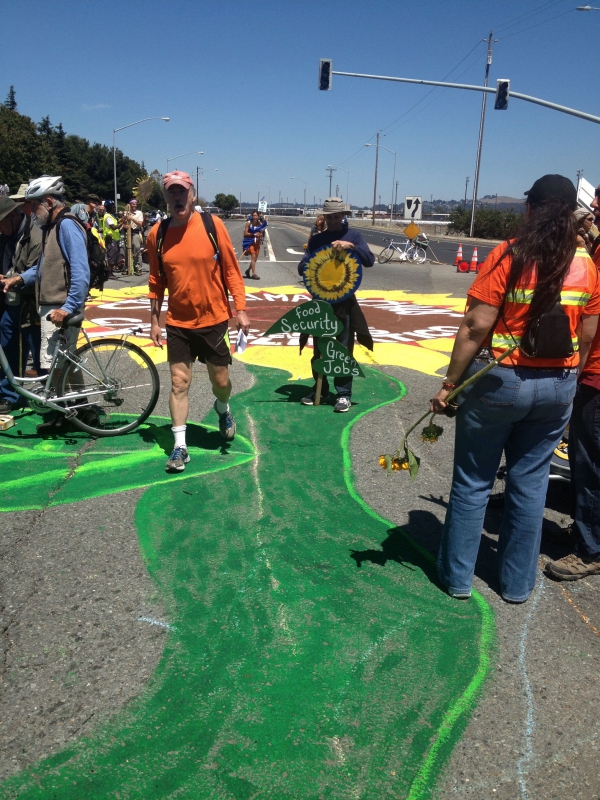 original image (2448x3264)
A large sunflower was painted on the street outside the Chevron Richmond Refinery, symbolic of the bioremediation needed to mitigate the toxicity created by the company and the petroleum industry.
http://www.350BayArea.org
§STOP CLIMATE CHAOS
by Ryan Rising Sunday Aug 4th, 2013 7:40 PM 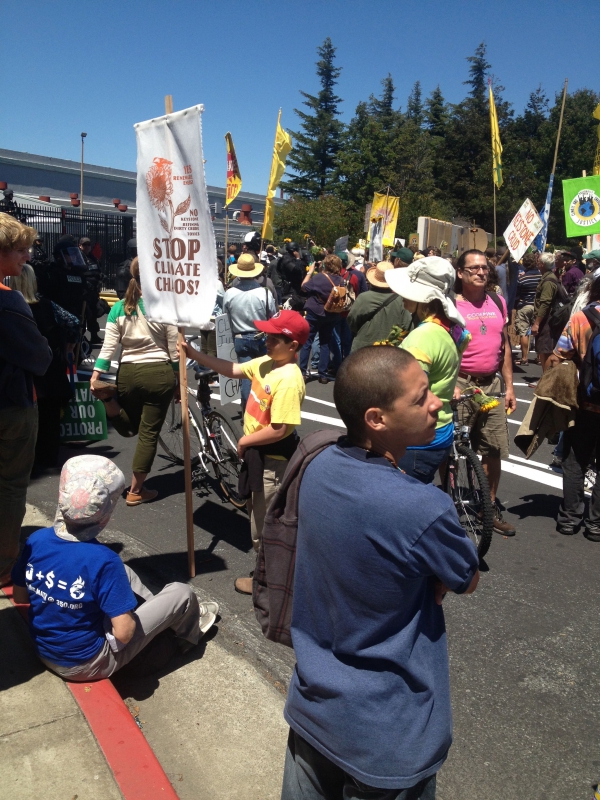 original image (2448x3264)
A young person holds a sign outside the gate of the Richmond oil refinery as people get arrested sitting-in at the gate.
http://www.350BayArea.org
§"Rise Up" Protest Outside of the Richmond Chevron Refinery
by Ryan Rising Sunday Aug 4th, 2013 7:40 PM 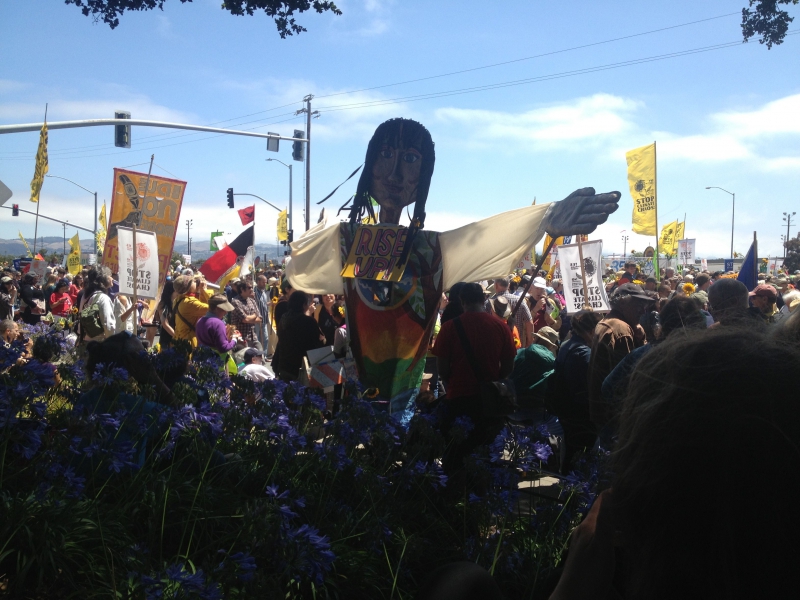 original image (3264x2448)
A hand made puppet proclaims, "RISE UP," as thousands gather outside the gates of Richmond's 2,900 acre oil refinery in Northern California.
http://www.350BayArea.org
Add Your Comments
LATEST COMMENTS ABOUT THIS ARTICLE
Listed below are the latest comments about this post.
These comments are submitted anonymously by website visitors.