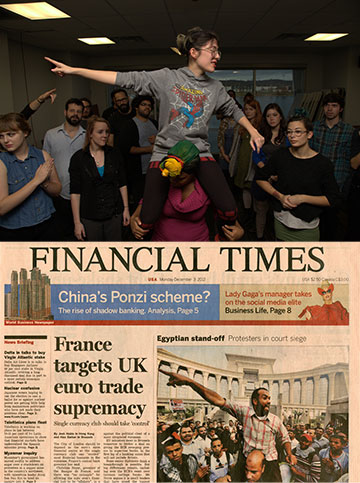 Register to participate in the workshops via Eventbrite at http://www.eventbrite.com/org/994232247.

Southern Exposure is pleased to announce a newly commissioned public project through its SoEx Off-Site Graue Award, featuring work from internationally recognized artist Liz Magic Laser. The Living Newspaper: Extra Extra is her first West Coast performance project. Over the course of five days, Laser and her collaborators, actors Audrey Crabtree and Michael Wiener, will stage public performances and man-on-the-street interviews inspired by the daily news in and around a Market Street newspaper kiosk in downtown San Francisco.

In addition to morning and evening street performances, the public is invited to participate in workshops led by Laser, Crabtree and Wiener, in which participants will discuss and recreate headline stories and images at Southern Exposure, August 7 – 11, 2013, 1 – 3 pm. Register to participate in the workshops via Eventbrite at http://www.eventbrite.com/org/994232247.

Laser's The Living Newspaper: Extra Extra is part of an ongoing project to performatively address the relationship between the news media and the public. By re-enacting news stories, she invites the audience to evaluate their consumption of current events.
END_OF_DOCUMENT_TOKEN_TO_BE_REPLACED
Added to the calendar on Wed, Jul 31, 2013 3:49PM
Related Categories: San Francisco | Media Activism & Independent Media
Add Your Comments
Support Independent Media
We are 100% volunteer and depend on your participation to sustain our efforts!