We're demanding Justice for Trayvon Martin, for Marissa Alexander, for Oscar Grant, for Justice For Ernest Duenez Jr., for the tens of thousands of others who have been left abandoned or condemned by a Broken and Racist Justice System!!!

We're standing up Against a System that wants only to Incarcerate, not Educate, a system built on plenty for the few and poverty for the many!!!!

We're shouting out for the end of the Criminalization of our Children, an end to Gang Injunctions, and Profiling Databases, used to keep them in chains for life!!!

We're calling for an Immediate end to police brutality and police murder, by establishing a Community Control over the Police, and an Elected Civilian Review Board!!! 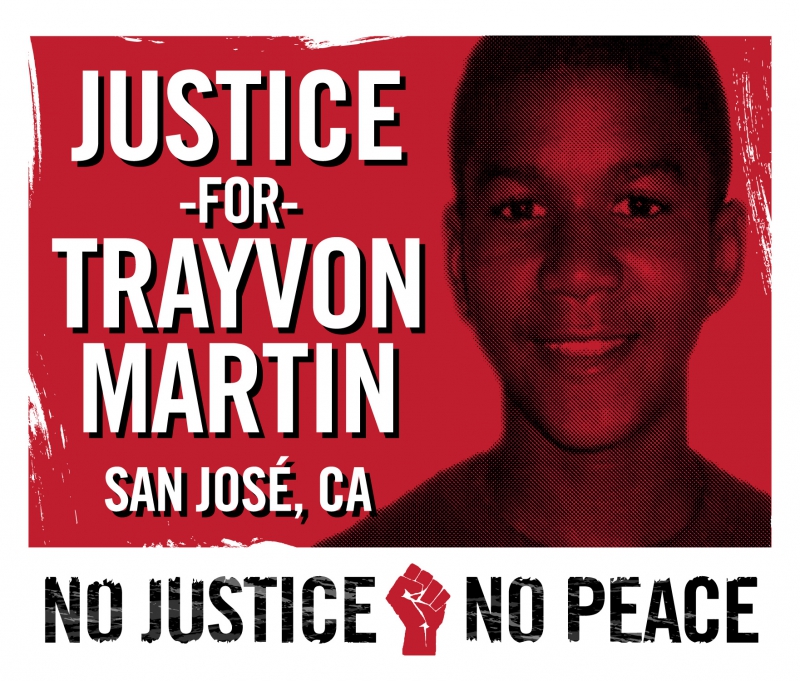 San Jose Justice for Trayvon Martin, is a local mass multi issue campaign made up of San Jose and larger Silicon Valley community members acting in support of the larger Movement of Justice for Trayvon Martin and Marissa Alexander specifically, and more broadly a group who seek out a Social Justice Agenda regarding a halt on the continued growth of California's Prison Industrial Complex, the Criminalization of Youth based upon the Apartheid styled use of Gang Injunction & Data-basing, and the promotion of the establishment of a Civilian Review Board & Community Control over Police.

SJ Justice for Trayvon Martin (and Marissa Alexander) does not believe in, nor ascribe to the color blind notion of Racism, one that believes that the United States of America is a Post-Racial Society based upon Equality and Meritocracy, instead we collectively have taken a principled stand that in fact Institutional Racism, not just bigotry, or individuated prejudice or misunderstanding exists as a foundational element of the American Judicial System, and Social Order. That in fact, the very act of murder, as in the case of an innocent teenager such as Trayvon Martin, and its not being defined as a criminal act, is evidence of this Racist Social Order and Justice System at work. That Verdicts in the George Zimmerman and Marissa Alexander cases, display stark examples of the way in which the Criminal Justice System not only is supposed to work, but actually does work. And that like the infamous declaration in the U.S. Supreme Court's Dred Scott Decision of March 6, 1857, that then as now:
"“In the opinion of the court[s], the legislation and histories of the times, ...that neither the class of persons who had been imported as slaves, nor their descendants, whether they had become free or not, ...for more than [four centuries have] been regarded as beings of an inferior order, and altogether unfit to associate with the white race, either in social or political relations; and so far inferior, that [we STILL have] no rights which the white man was bound to respect..."

This sad state of affairs, has been proven out repeatedly by the continued and growing mass incarceration of primarily Black and Latino Men and Women to such a degree, that now the U.S. has a greater percentage of its population locked up than any other country in the world. This is not a new Jim Crow, but in fact the ongoing and genocidal institution of Slavery alive and well, as the 13th Amendment to the Constitution of the United States clearly states:
"Neither slavery nor involuntary servitude, except as a punishment for crime whereof the party shall have been duly convicted, shall exist within the United States, or any place subject to their jurisdiction."

That the abused mother of three, trying to defend herself from an attacker/abuser as in the case of Marissa Alexander, has the right to defend herself BY ANY MEANS NECESSARY, most especially when in her case absolutely no harm was done to anyone, except her ceiling.

That she need not be pardoned, because she has committed NO CRIME, she needs to be freed from her bondage outright and allowed to return to the life and family she chooses.

That a teenager needn't fear for his life when going to the store to buy candy and a drink, while walking outside of his home, nor live in fear of being profiled, harassed, stalked and shot through the heart as Trayvon Martin was, or as thousands upon thousands of other young men have been over the years.

That all young black and brown men have the right to life, and freedom, always. And shouldn't be caged as animals into a life of poorly camouflaged chattel slavery.

That no more of these Concentration Camps called Prisons and Jails are built in order to feed the greed of profiteers, nor the avarice of a society unwilling to look at or resolve its own contradictions about Racism, Slavery and Genocide.

That such young men need not fear living a half live, one in which every movement is regulated and repressed by the apparatus of state, by force or injunction.

And that a society based upon a system of impunity in which the monopoly of violence is held only by abusers, criminals and terrorists with badges and credentials is not one worthy of preserving.

And that in order for one to Protect and Serve, they must do just that, Protect and Serve and be overseen and controlled by the Civilian Communities within which they live. Not simply enforce the edict of absentee landlords, and those whose sole purpose and aim is to continue to maintain the very system of Injustice that creates such lethal consequences for youth black, brown and poor men and women.

As such, we have adopted/adapted the following Demands from Justice 4 Trayvon Martin, Los Angeles:

2. FREE Marissa Alexander:
a. Ms. Alexander comes from the same state as Zimmerman, she did not hurt anyone, she was protecting herself against someone who abused her, she was traumatized, she stood her ground and the law wasn’t afforded to her.

3. No More New Jail and Prison Construction
a. Jails and prisons draw critical funds away from poor, working class communities of color.
b. The business of prisons generates the need to criminalize Black & Brown bodies.

4. End Gang Injunctions & Database
a. The rationalization of gang injunctions follows the same rational of racial profiling that allowed for Trayvon Martin to be hunted and murdered.

5. Community Control Over All Law Enforcement With an Elected Civilian Review Board
a. The families of people with stolen lives by law enforcement should have their cases re-opened, re-investigated, and given reparations.
b. These are our tax dollars, our community; we should have a say of what safety looks like. 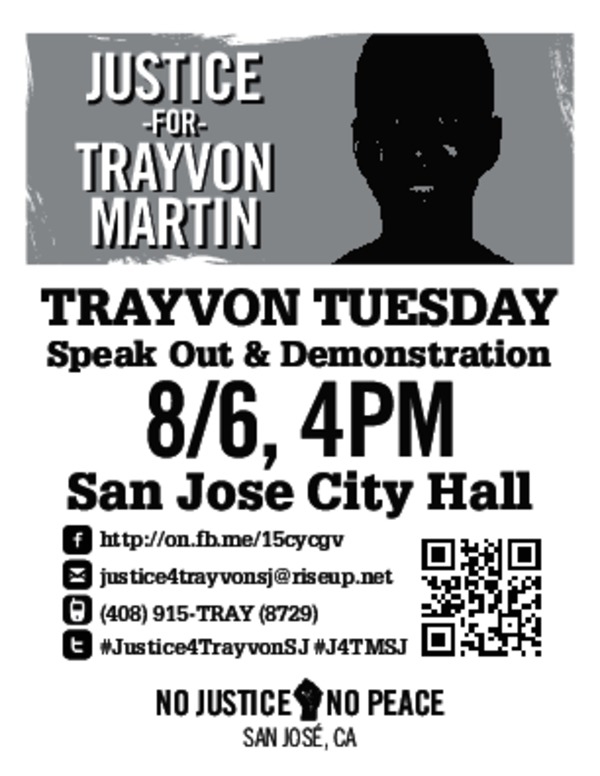 Download PDF (1.6MB)
WE NEED YOU IN THE STREETS...
https://www.facebook.com/groups/3343195100...
Add Your Comments
Support Independent Media
We are 100% volunteer and depend on your participation to sustain our efforts!