The officials refused to answer this question, since they apparently had no answer. 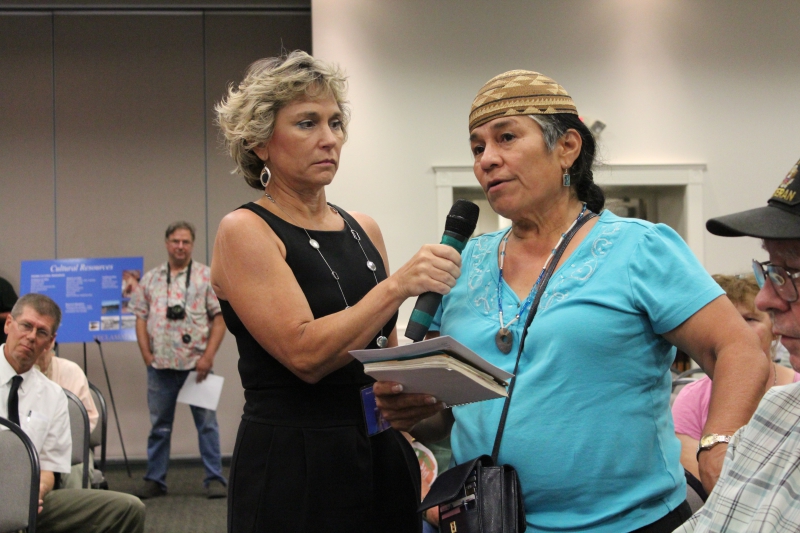 One thing became clear from the public workshop regarding the proposed Shasta Dam raise held at the Holiday Inn in Redding on July 16 - the vast majority of local people, ranging from Winnemem Wintu Tribe members to local business owners, oppose the raising of the dam.

When one woman in the crowd asked for a show of hands of those who oppose the dam raise and those who support it, the majority of the 250 people in the audience raised their hands in opposition. Only a small number of hands went up in support of the controversial plan.

The event began with a power point presentation by Michelle Denning of the Bureau of Reclamation, accompanied by other Reclamation staff and consultants.

The primary purposes of the project are to (1) “increase survival of anadromous fish populations in the upper Sacramento River” and (2) “increase water supply and water supply reliability for agricultural, municipal and industrial, and environmental purposes," according to the Bureau.

The workshop focused on the Draft Environmental Impact Statement for raising Shasta Dam. The 90-day public comment and review period for the EIS started on July 1 – and the workshop held in Redding was one of three workshops held throughout the state that week.

The draft EIR evaluates five controversial alternatives that would raise the dam from 6.5 feet to 18.5 feet, increasing the reservoir’s capacity by 256,000 to 634,000 acre-feet. The document also evaluates a “no-action alternative.”

Presenters claimed that the study, the Shasta Lake Water Resources Investigation, would improve the “operational flexibility” of the Delta watershed and increase the survival of salmon and other fish in the Sacramento River by increasing the amount of cold water pool available to be released to improve downstream temperature conditions for fish during critical periods.

Other “benefits” touted in the power point presentation include increased flood protection, providing additional hydropower supplies, and improving water quality in the Sacramento River and the Delta.

However, as one speaker after another pointed out in an informal public comment and question period, there are many adverse impacts of the project. These include the inundation of the Winnemem Wintu Tribe’s sacred sites, the need to relocate boat ramps, campgrounds and other recreational facilities, dislocation of residents and business owners on Shasta Lake, loss of future income by displaced people, the take and loss of habitat for numerous special-status species at Shasta Lake and vicinity, and impacts on south Delta water levels and Delta outflows.

The project would also impact the McCloud River’s status for listing as a federal Wild & Scenic River. Dam raise critics also questioned whether the management of the cold water pool is effective way of managing declining populations of Central Valley Chinook salmon.

Kenwani-Cahee Kravitz, a member of the Winnemem Wintu Tribe, said the Shasta Dam raise would violate her religious freedoms.

Harold Jones, owner of Sugar Loaf Cottages on Lake Shasta, said his operation would go out of business if the dam is raised 18-1/2 feet as proposed.

“If they take the property and pay for the land, then what will we do about our future income? The government doesn’t allow future income loss to be considered in compensating landowners and business owners,” he emphasized.

Caleen Sisk, Chief of the Winnemem Wintu Tribe, asked several questions starting with, "When will the 1941 Indian Land Acquisition Act, that took the tribal lands, be addressed?"

The officials refused to answer this question, since they apparently had no answer.

Sisk also asked: "Will raising the dam meet the demands of Southern California?"

Denning responded that the dam raise would provide water to the Central Valley Project and deliver some exported water to people in the San Joaquin Valley, East Bay Area and Glenn and Colusa Counties, but acknowledged that it would be not be enough to satisfy all of the contracts and Southern California.

Finally, Sisk asked, "Where is the plan to get the salmon above the dam?"

Denning responded, “The biological opinion alternatives dedicate 60 percent of storage to cold water to improve downriver conditions for fisheries in dry and critically dry years by meeting the temperature requirements,” but she never really addressed the plan to get the fish above the dams.

The Winnemen Wintu have been for years trying to pressure the federal government to reintroduce winter run Chinook salmon, by means of salmon transplanted to New Zealand around the turn of the century, to the McCloud River above Shasta Dam.

The Central Valley Project Improvement Act of 1992 mandated the doubling of all anadromous fish populations, including Central Valley chinook salmon, by 2002. Instead, the salmon populations crashed in 2008 and 2009, due to record water exports out of the Delta and poor ocean and river conditions, and the goal of 990,000 naturally spawning salmon has never been met.

A new analysis released on May 13 by the Golden Gate Salmon Association (GGSA) and the Natural Resources Defense Council (NRDC) reveals that the salmon fishery is limping along at only 20 percent of the population goal required by state and federal law. (http://www.indybay.org/newsitems/2013/05/15/18736849.php

“How do you expect extending the cold water pool for salmon at Shasta will produce more salmon when the current cold water pool management hasn’t made more fish?” Sisk said. "This is not logical."

Chris, a local resident, exposed the absurdity of plans to raise the dam when the lake has been has filled only 11 times in the 59 years of the existence of the reservoir, only 19 percent of the time.

“This tells us that the lake has been mismanaged 48 percent of the time. It makes more sense to manage the water that you have in the reservoir than than to raise the dam,” he pointed out.

In response to my question about the relation between the plan to build the peripheral tunnels and the dam raise proposal, Denning said there is “no relationship between the dam raise study and the Bay Delta Conservation Plan.”

However, everybody who has studied the issue knows that there is a clear relationship between the two projects because one is contingent upon the other. The dam is being raised to provide increased water to corporate agribusiness and oil companies that will be shipped south through the tunnels.

After the meeting Chief Sisk pointed out that participants in the workshop forgot to ask two key questions about emergency evacuation plans and toxic waste.

“No one asked about the evacuation plans for Redding should the dam ever break," said Sisk. "Just think... no one thought Hurricane Katrina would ever happen.”

“Also, what about the toxic waste at the bottom of the Lake? The fish are already mercury poisoned!,” she noted.

Background: In February of 2012, the Bureau of Reclamation released a Draft Feasibility Study that determined the project was both" technically and environmentally feasible," as well as "economically justified;" the study determined that raising the dam 18.5 feet would cost just over $1 billion dollars and would produce from $18 to $63 million in net economic benefits per year.

The project is just in its beginning stages; the Draft Feasibility Report, the Draft Environmental Impact Statement, and the public comments received on both documents will be used to determine next steps. If the project is approved, it could be completed by 2021.

The Bureau will host three formal public hearings to receive oral or written comments regarding the draft EIS. They will be held on the following dates at the following locations:

For information on the Draft EIS, please visit 'http://www.usbr.gov/mp/nepa/nepa_projdetails.cfm?Project_ID=1915. If you encounter problems accessing the documents online, please call 916-978-5100. 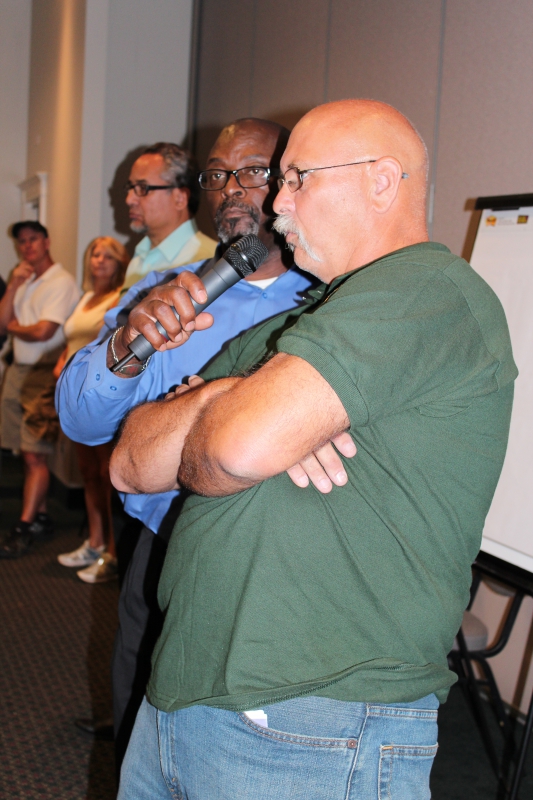 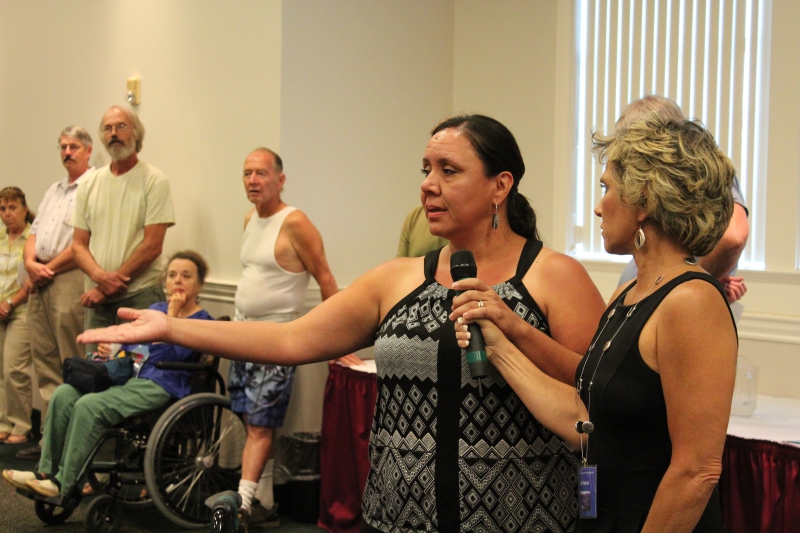 original image (5184x3456)
Kenwani-Cahee Kravitz tells federal officials that the Shasta Dam raise will prevent her daughter from participating in her coming of age ceremony at Puberty Rock on the McCloud River.
§Big crowd at meeting
by Dan Bacher Wednesday Jul 24th, 2013 9:28 AM 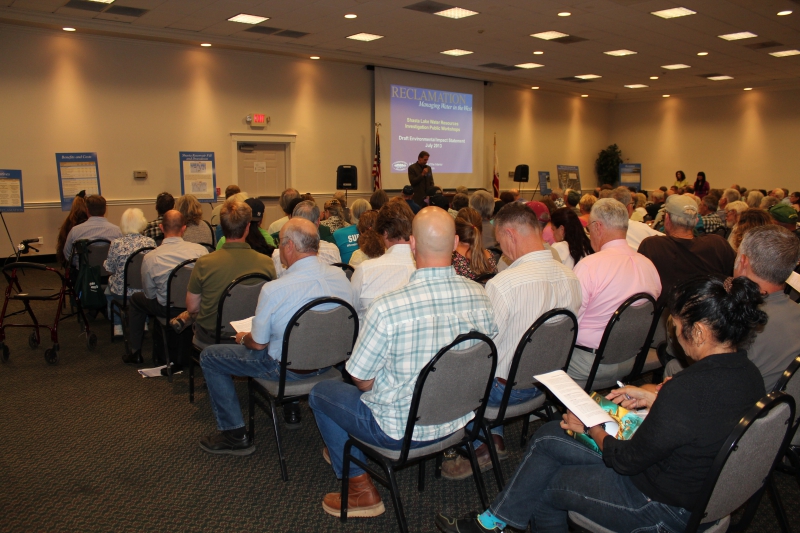 original image (5184x3456)
A large crowd, the vast majority opposed to the Shasta Dam raise proposal by the Bureau of Reclamation, attended the workshop at the Holiday Inn in Redding on July 16.
§Bureau officials
by Dan Bacher Wednesday Jul 24th, 2013 9:28 AM 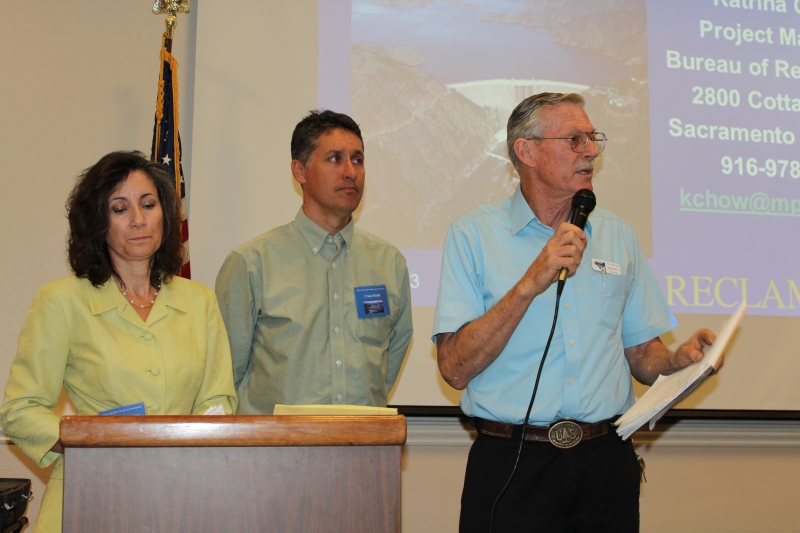 original image (5184x3456)
Bureau of Reclamation officials gave a power point presentation on the "Shasta Lake Water Resources Investigation" environmental documents.
Add Your Comments
LATEST COMMENTS ABOUT THIS ARTICLE
Listed below are the latest comments about this post.
These comments are submitted anonymously by website visitors.