Add an Event
Newswire
Calendar
Features
Home
Donate
From the Open-Publishing Calendar
From the Open-Publishing Newswire
Indybay Feature
Publish to Newswire
Add an Event
Related Categories: Santa Cruz Indymedia | Police State & Prisons
Local ACLU Rides...er...Hides Again!
by Robert Norse (rnorse3 [at] hotmail.com)
Tuesday Jul 23rd, 2013 8:29 PM
Last night the ACLU at its monthly meeting rejected an "open meetings" policy and did a quick "in and out" Public Comment period during which they "generously" allowed the public into the room for 10 minutes of their 2 hour meeting. Vice-Chair Steve Pleich's declined to provide an agenda on request and when asked why he supported the May exclusion of the public from the previously-open ACLU Board meetings, he declined to respond. The Board voted to support the smiling authoritarian leadership of chair Peter Gelblum, whom some regard as a protege of the notoriously anti-homeless Mike Rotkin--long-time power broker on the Board and 5-time Santa Cruz mayor (an advocate of the Sleeping and Sitting Bans as well). 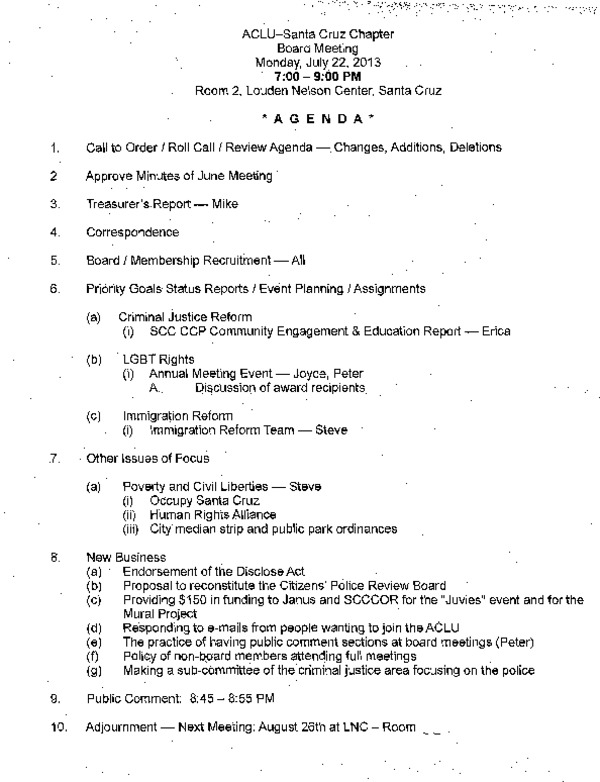 Download PDF (15.7KB)
Since the public was shoo-ed out of the meeting at the beginning and then only readmitted briefly for "Public Comment, I have no report on the ACLU meeting last night. It's regularly held the fourth Monday each month in Louden Nelson Center at 7 PM.

Racial Profiling was not on the agenda in spite of the recent furor around the killing of Trayvon Martin and the Sunday march demanding an end to racial profiling. The closest thing was the mention on the agenda of reestablishing a Civilian Police Review Board (an ancient ACLU hobbyhorse which the local did not defend with any vigor when it was sliced and diced in 2003 with Rotkin on the City Council and, I think, on the ACLU Board).

I finally secured a copy of the agenda before I was "requested to leave the room by Chair Peter Gelblum. Golblum unilaterally closed the meeting 2 months ago (See "ACLU Chair Closes Monthly Boad of Directors Meeting, Homeless Issues Off the Agenda" at https://www.indybay.org/newsitems/2013/05/21/18737162.php) in likely response to a demand that the ACLU deal with local homeless issues and the presence of several members of the public who were then kept waiting in the hall at that time.

At the June meeting, which Pleich chaired, the public was again allowed into the meeting and even sat around the table giving input on the agenda issues, continuing the practice of the 2-3 previous meetings I'd attended in the last year.

At last night's meeting, the public was again excluded from all but the Public Comment section of the meetings. Public Comment is regularly placed at the end of the 2-hour agenda. (On this occasion, perhaps out of courtesy or in compensation for excluding the public from the rest of the meeting, one person was allowed to speak to the board after only waiting for 20 minutes in the hallway.

James spoke about being political signs now being regularly excluded from the Public Library. He also reported receiving the same treatment at the bus stop in front of Trader Jo's where, he said, a metro official in a vehicle stopped and directed him not to have the sign visible while sitting on the bench waiting for a bus. He said he filed a written complaint with the Metro. He also reported being told not to bring his sign into the St. Francis Soup Kitchen.

We should ask the library for its new First Amendment-free policies, which blend in nicely with its Sleeping Ban for the homeless, ramped up penalties there, and general homeless-hostile procedures. (See "Sleeping Ban Back For All Santa Cruz Libraries..." at https://www.indybay.org/newsitems/2013/03/04/18733085.php ). Ditto with the Metro.

If accurate, James's tale dovetails nicely with the new Sign-removal laws for medians and roundabouts and the decorum rules in Parks--part of the general bigot free-for-all against people outside (See "Round Two--the Anti-Homeless Laws Return...") at https://www.indybay.org/newsitems/2013/06/10/18738230.php .

Prior reports by Razor Ray and other homeless people about security guard and police harassment months back resulted in no action from the ACLU--which continues to maintain a discreet silence on abuses by politicians, vigilantes, the SCPD, the library, and private businesses in Santa Cruz. This silence contrasts sharply with ACLU's in San Francisco, Berkeley, Fresno, Los Angeles, and other cities where they not only speak out but initiate legal action.

The agenda, as can be seen, mentions Criminal Justice Reform, LGBT, Immigration Reform, a Citizen's Police Review Board, etc. as well as "Poverty and Civil Liberties" Issues--which makes nice filler for garnering dues and donations, but seems to have little to do with real action--at least locally as far as civil liberties threats in Santa Cruz are concerned.

Of course, this is nothing new.

It appears that Pleich's blithe assurance to me before the meeting that he had "the votes" to clarify and establish a regular "open meetings" policy was overly optimistic. It might have been better if Pleich had raised the issue two months ago when Gelblum ordered me and others out of the room, shutting down the meeting, in disregard to six of us, leaving us lingering in the hallway.. I was particularly incensed because Pleich followed supinely behind Gelblum's "manage by exclusion" diktat--arguably in response to e-mails I previously sent out urging homeless people to come and challenge the ACLU's silent-on-homeless-abuse policies.

I can't seem to take my own advice--as evidenced by this article--which is to ignore the ACLU and work on creating a group really concerned with the civil liberties of poor and homeless people (actually of all folks locally). If someone wants to step forward, please contact me. I'd like to help. In the meantime, I'll try to take cold showers and avoid smarmy politicians. ...Hmm, not likely.

My prior posts on indybay detail some of the issues a real local civil liberties organization might speak up on (see "Earlier E-Mails to the ACLU on Denial of Civil Liberties to the Santa Cruz Homeless" at https://www.indybay.org/newsitems/2013/05/21/18737162.php#18737164). The issues are pretty clear, if anyone wishes to raise them.