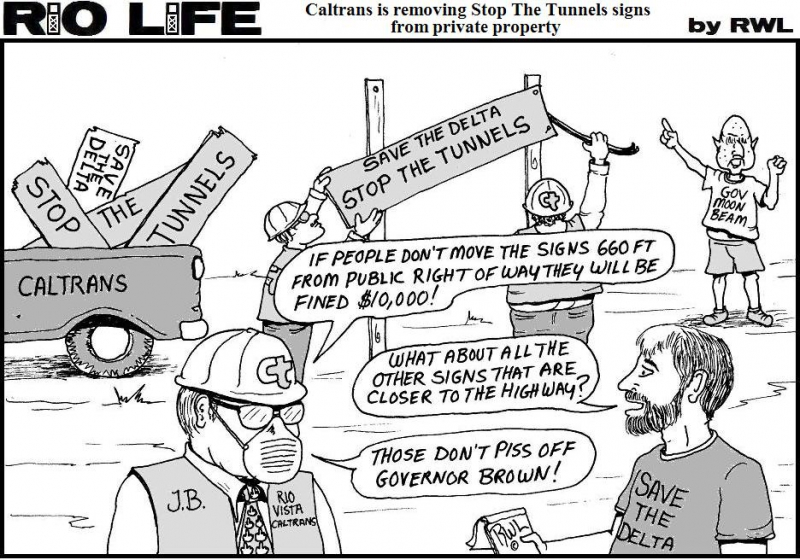 In an alarming move against the First Amendment, Governor Jerry Brown is apparently using the California Department of Transportation (Caltrans) to silence critics of his proposed peripheral tunnels under the Sacramento-San Joaquin River Delta, according to Restore the Delta (RTD).

The Stockton-based group called on Brown to order Caltrans crews to cease confiscating “Save the Delta! Stop the Tunnels!” signs displayed by Delta land and business owners, even though these signs are posted on private property.

Barbara Barrigan-Parrilla, Executive Director of Restore the Delta, and Delta business and landowners who have had signs confiscated will hold a press conference on Friday, July 12, at 10 am in front of the Caltrans Headquarters, 1120 N Street, Sacramento to protest this abuse of power.

Delta advocates oppose the Bay Delta Conservation Plan (BDCP) to build the peripheral tunnels because the $54.1 billion project will hasten the extinction of Sacramento River Chinook salmon, Central Valley steelhead, Delta and longfin smelt, green sturgeon and other fish species. The project would also, under the guise of "habitat restoration," take large areas of Delta farmland, some of the most fertile on the planet, out of production in order to deliver massive amounts of water to irrigate toxic, drainage-impaired land on the west side of the San Joaquin Valley.

"We are outraged that the Brown Administration is trampling the rights of business and land owners who have posted signs on their property opposing the Peripheral Tunnels," said Barrigan-Parrilla. “This is biased enforcement of little-used provisions to silence critics of the Governor's proposed Peripheral Tunnels.”

“Anyone driving on I-5, Highway 99, and other state highways in the San Joaquin Valley can see signs from Westlands Water District mega-growers and others blaring their views on water. Caltrans has happily left those signs in place. The people of California don't pay state taxes so Caltrans can trample property and free speech rights in service of Gov. Brown's doomed tunnels project,” said Barrigan Parrilla.

Those Delta residents who had their signs confiscated include Warren Smith, whose family has farmed the North Delta for four generations. After Smith on Sunday put up two signs opposing the tunnels on his land where it crosses Highway 160, a Caltrans crew on Monday pulled the signs down and took them away.

Smith said the signs were placed 6 feet off the highway on his own property. "I never dreamed we couldn't do that," he told Alex Breitler of the Stockton Record. (Http://www.recordnet.com/apps/pbcs.dll/article?AID=/20130709/A_NEWS/307090312)

An action alert from Restore the Delta on July 8 stated, "According to Jeff Bennett, Supervisor at the Cal Trans Rio Vista office, display of such signs is in violation of Streets and Highways Code 54053, because our message is supposedly a political campaign message and political messages cannot be displayed within 660 feet of a public right of way. According to Mr. Bennett, our signs have nothing to do with the operation of the businesses at which they are displayed."

“And never mind that growers in the Central Valley can display their ‘Congress-Created Dustbowl' signs up and down the I-5 within 660 feet of the freeway right of way. Jeff Bennett says that he cannot enforce the code in areas outside of his assigned area,” the alert continued.

“Under state law that has been on the books since 1933, any private sign on state right-of-way—regardless of the content of the message—will be removed; therefore if signs are placed beyond the 14 foot limit from the pavement edge they will not be removed in this area of SR-160.”

Restore the Delta said Monday that the group would be making a trip to the Rio Vista Caltrans office to retrieve the signs.

Since RTD put out the alert, it's been learned that Caltrans cited the wrong section of law. "It's actually Business and Professions Codes sections 5403, 5405 and 5405.3 that may have some relevance here," according to Jerry Cadagan, lawyer and environmental activist.

Meanwhile, the group urged people to call Jeff Bennett, Rio Vista Cal Trans Supervisor, at (707) 689-3480, to let him know what they think of the decision to confiscate the anti-tunnel signs. Please ask Mr. Bennett why his crew simply didn't send notes asking people to move the signs before confiscating them from private property.

They also urged people to send an email to Steve Takigawa, Deputy Director of Maintenance and Operations for Caltrans, at Steve.Takigawa [at] dot.gov, letting him know what they think of the uneven enforcement of this law. "Let him know how you feel about your right to express a message that is not part of a political campaign but rather a response to state policy," the group said.

You can also send a similar message to Tamie.McGowen [at] dot.ca.gov, Assistant Director of Public Affairs.

The larger context: Increasing attacks against Freedom of Speech

The confiscation of the signs in an obvious attempt to censor Freedom of Speech by tunnel opponents occurs in the larger context of the war on the First Amendment, Freedom of Speech and the Constitution by the federal and state governments.

The draconian provisions of the Patriot Act, NDAA and other repressive laws, the federally-coordinated crackdown on the Occupy movement, the widespread NSA surveillance of personal emails, the IRS targeting of NGOs that disagree with the Obama administration, and other measures by the federal and state governments serve to criminalize dissent and repress our First Amendment rights.

The First Amendment to the United States Constitution states, "Congress shall make no law respecting an establishment of religion, or prohibiting the free exercise thereof; or abridging the freedom of speech, or of the press; or the right of the people peaceably to assemble, and to petition the government for a redress of grievances."

It was adopted on December 15, 1791, as one of the ten amendments that comprise the Bill of Rights. Unfortunately, neither the Brown or Obama administrations appear to have much respect for the First Amendment or other Constitutional Rights.

Background: Brown continues and expands Schwarzenegger's war on the environment

The rush to build the peripheral tunnels, in spite of widespread opposition, is not the only abysmal Schwarzenegger administration environmental policy that the Brown administration has continued and expanded. Brown continued and expanded the massive water exports and fish kills at the Delta pumps that the Schwarzenegger regime became notorious for.

In addition, Brown and Natural Resources Secretary John Laird continued the privately-funded Marine Life Protection Act (MLPA) Initiative started by Governor Schwarzenegger in 2004. The conflicts of interest, failure to comprehensively protect the ocean, shadowy private funding, incomplete and terminally flawed science and violation of the Yurok Tribe's traditional harvesting rights have made the MLPA Initiative to create so-called "marine protected areas into one of the worst examples of corporate greenwashing in California history.

Other environmental policies of the Schwarzenegger administration that Brown and Laird have continued include engineering the collapse of six Delta fish populations by pumping massive quantities of water out of the Delta; presiding over the annual stranding of endangered coho salmon on the Scott and Shasta rivers; clear cutting forests in the Sierra Nevada; supporting legislation weakening the California Environmental Water Quality Act (CEQA); and embracing the corruption and conflicts of interests that infest California environmental processes and government bodies ranging from the Bay Delta Conservation Plan to the regional water boards.

Now Brown has apparently expanded his war on fish, rivers, the ocean and the environment to the First Amendment as he confiscates signs of those who oppose the peripheral tunnels. What will Caltrans do next - start pulling bumper stickers off the vehicles of peripheral tunnel opponents?
Add Your Comments
LATEST COMMENTS ABOUT THIS ARTICLE
Listed below are the latest comments about this post.
These comments are submitted anonymously by website visitors.